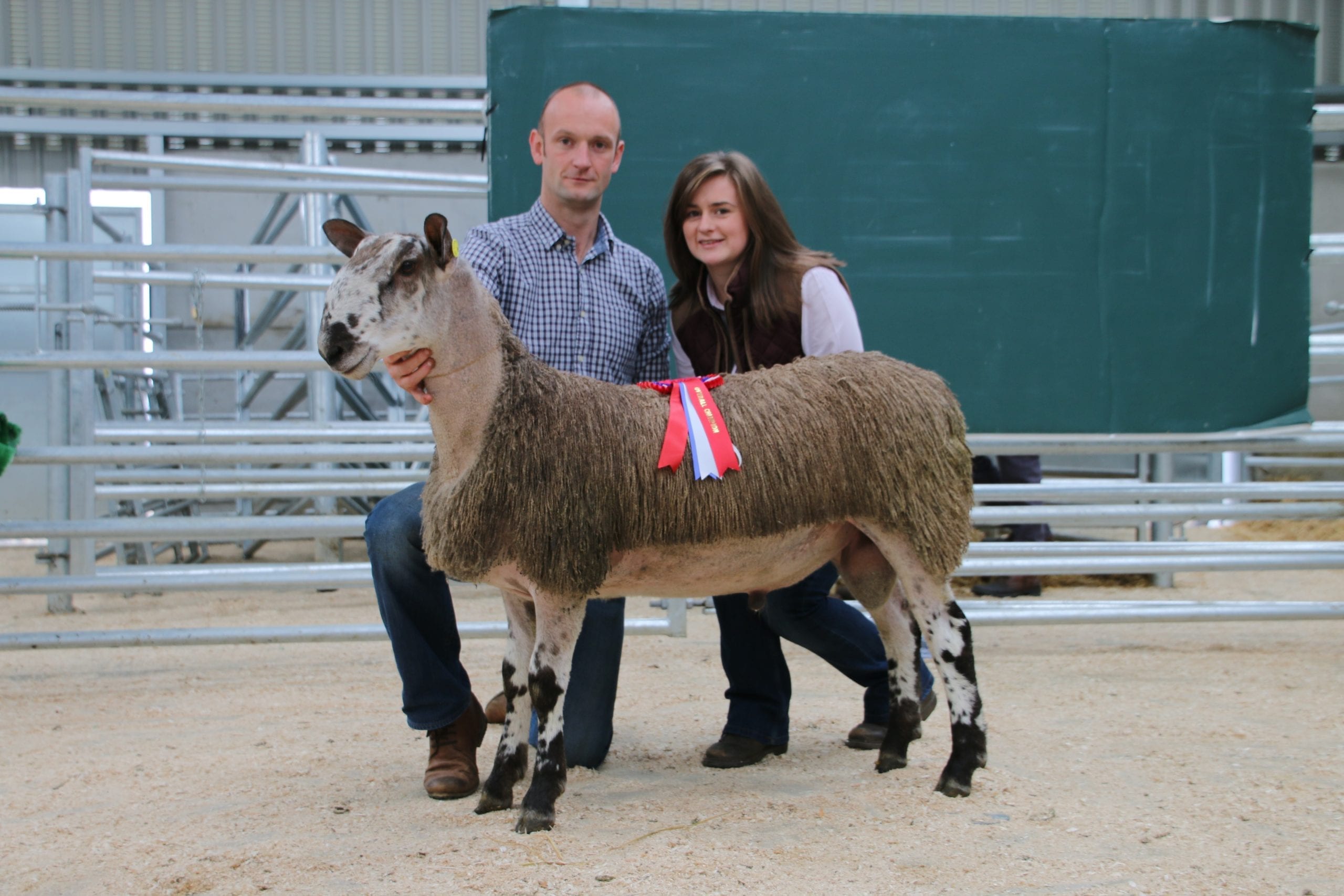 There was a quieter atmosphere around the ring in Ballymena this year. The averages fell in the shearling section by £117 levelling out at £608 for 162, and lamb trade was up £58 leaving an average of £571 for 90 sold. Buyers being selective, but being prepared to pay more for the better quality tups.

Highlight of the day was the 2nd prize tup lamb from Eamonn Harkin, Moneygran. A strong, modern lamb by F1 Duhonw, “Golden Balls” and out of a dam by B4 Hundith X Factor, there was a lot of good breeding in this lamb realising 4000 gns and finding a new home in Scotland with Stewart Park, S P Dalpeddar flock. Next top price of the day was a big correct shearling tup from Graham and Julie Loughery, Temain flock, used as a lamb and siring three Mules in their top pen of ten. Sired by E18 Temain, selling to local Mule breeder Brian Mullan, Tybern, Coleraine. Graham and Julie also received 1800 gns for a shearling by D17 Firth selling to P Gallen, Castlederg, Co Tyrone. The Temain flock were again having a great day in the lamb section with the next two top sales – 2300 gns and 2150 gns. Both lambs being sired by G1 Cottage an £8000 purchase in Hawes last year certainly leaving his mark in the flock. The first being an April born ET lamb out of a D17 Hewgill sired ewe lamb selling to Richard Black, Strabane and Mark Galbreith, Coleraine, the second lamb also being a very bare late born lamb by a C3 Midlock mother selling to Martin Kelly, Limavady.

The first ram lamb into the ring from B Blaney Tievebuaile, got the ram lambs off to a flying start selling to 1900 gns. A son of B41 Hewgill with a Y1 Midlock dam, a big, powerful, correct lamb crossing the water to the flocks of Alec Brown, Maqueston and John Park, Forbrae. Alec Brown had the job of judging the event earlier in the day and awarded overall champion to the first placed ram lamb from Declan McKillop, Giants Causeway a son of G1 Giants Causeway and selling at 1800 gns to John Delargy, Cushendall. Reserve champion was awarded to T Wray, Knockstacken, for his first placed shearling selling at 1100 gns to P Gallen, Castlederg. T Wray had his usual pen of tremendous shearling rams and was awarded the Kerr Memorial Cup for best pen of tups at the sale, selling to a top of 1800 gns for a two shear bred by S McClymont & Son, Auld Tinnis finding a new home with John Taggart, Glenarm. Next up for Timothy was one at 1700 gns for a B10 Orravale son selling to Joe Murphy, Cushendunn. Robert Loughridge one of the first shearling exhibitors of the day with a strong pen of tups selling to a top of 1800 gns for one by D3 Maqueston, E Loughran, Cookstown was the last man in. Champion female was awarded to D McKillop, Giants Causeway, for a modern ewe lamb by G4 Firth and finding a new home with W Bell, Co Down for 1120 gns. 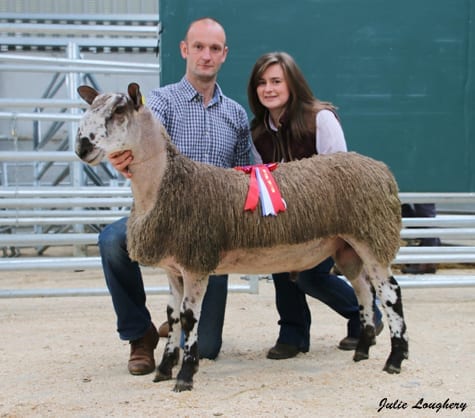 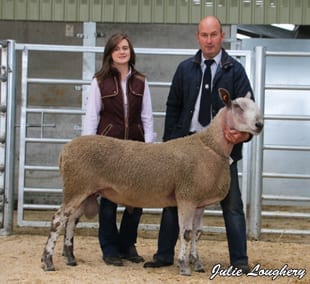 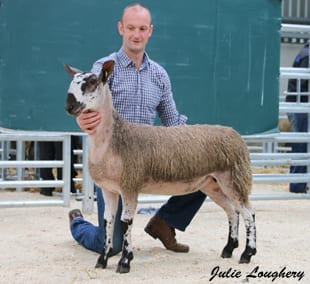 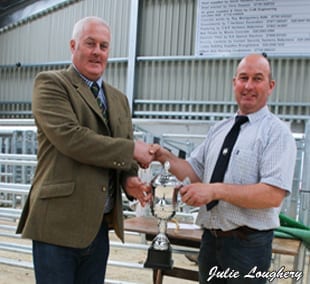 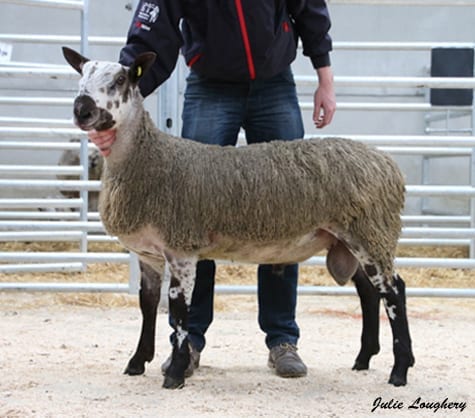 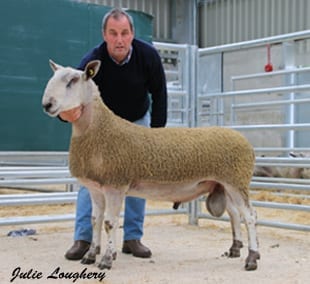 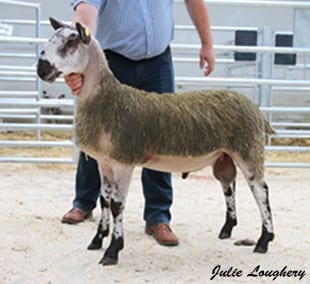 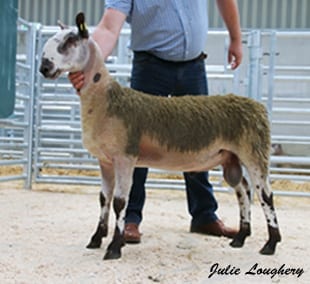 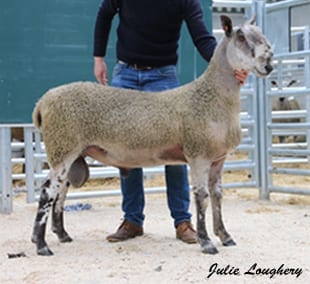 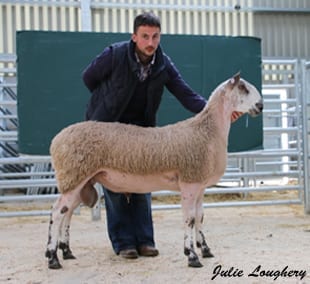 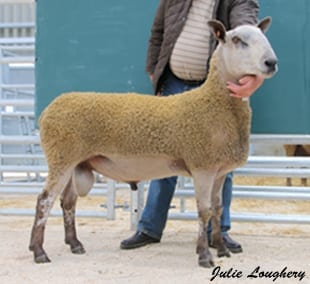 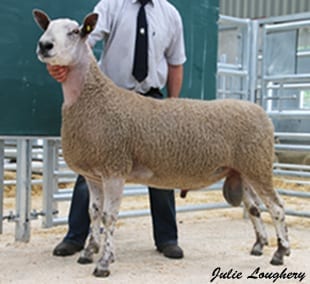 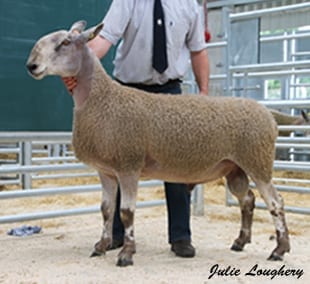