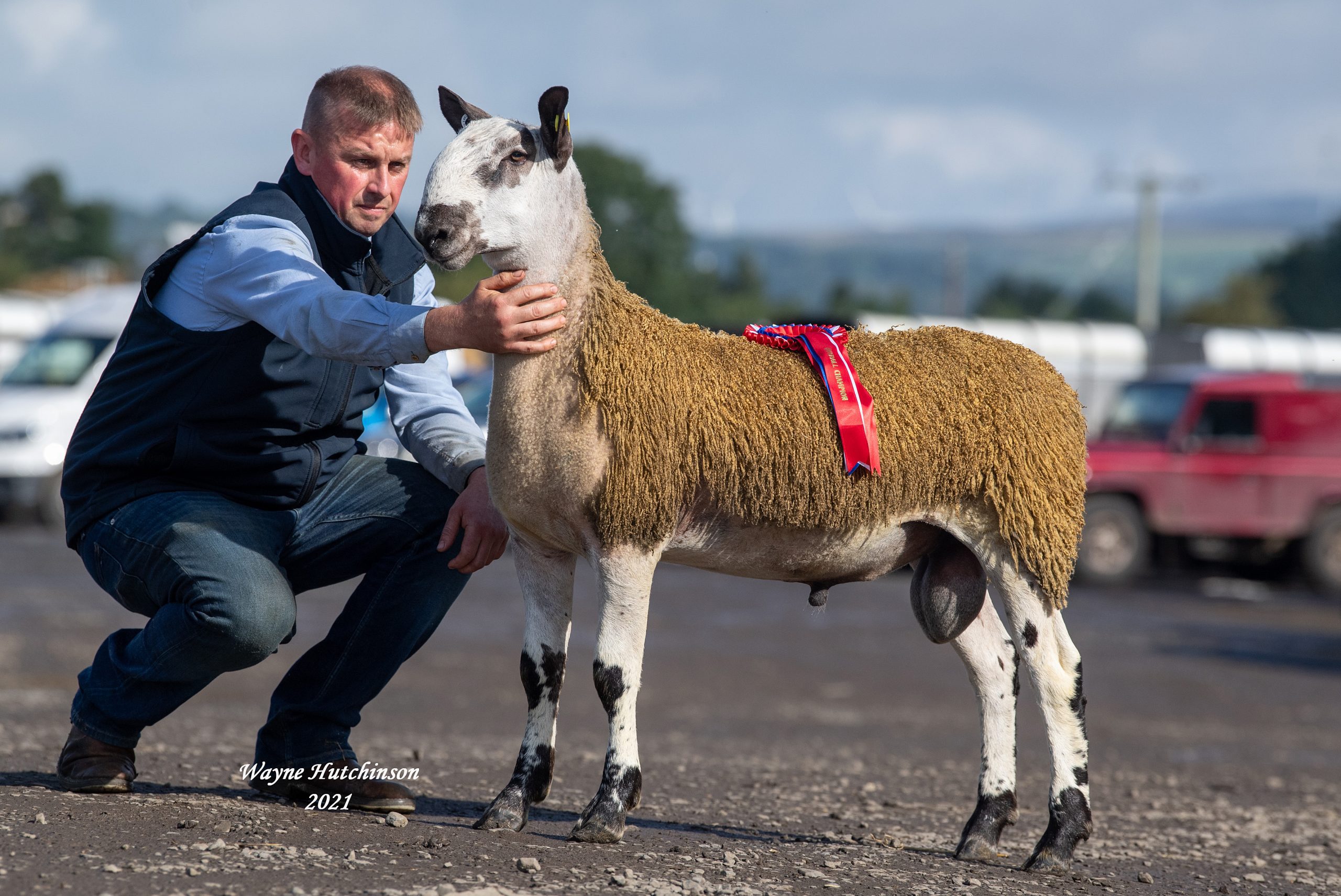 After the fireworks of last years sale, this year’s sale was eagerly anticipated by all the breeders involved in this great sale which, as always, has a great atmosphere and some of the keenest breeders you could ever wish for. The big challenge was an increased entry this year, which made sales more competitive, but whilst the average took a hit, which was to be expected after last years bumper sale, the average for the tup lambs was a very healthy £1236.74 for an extra 27 sold.

Topping the trade this year was an April born lamb from the Temain flock, run by Graham & Julie Loughery, Limavady. This sharp son of the Midlock Iceman bought out of Hawes last year for £25,000 and out of one of the flocks leading ewes by the K5 Hewgill, was knocked down at 18,000gns selling to Christopher Brown, Ballygarian, Hill Town, where he runs a dozen Blue ewes alongside their flock of Blackface and Mourne ewes. The Temain flock retained a share in him too. The Temain flock enjoyed a rip-roaring trade, and their second lamb in also hit the magical five figure mark when it was knocked down for 10,000. This one was by the homebred tup, Dark Horse, which sold last year for the same figure. Dark Horse is by the £20,000 Yore House Maverick champion, bought out of Hawes a couple of years back and having a massive impact on the breed here. The lamb was out of another Hewgill K5 sired ewe and sold in a four-way split to breeders Steven Wilson, Brendan McCallister, William Bell, and Elaine McGarel. Another Iceman son out of a Maverick sired ewe hit 6500gns as the good run continued for the family. This one was bought in a two-way split with Timothy Wray and Eoin McKenny the ones who will be picking out the ewes for him this autumn. Not only topping the lamb trade Graham & Julie had a cracker of a shearling trade too, topping at 5500gns, which was the top in the shearling section. This one, Temain N29, was by a Macherquhat tup bought from Robert Wallace out of Hawes a few years back and out of the flocks’ favourite ewe, Ruby, another Hewgill K5 daughter, which was behind last year’s 19000 & 10,000 lambs. He was taken home by Robert Workman. The Temain flock had some very impressive averages, with figures of £3150 for 16 lambs and £2380 for 13 shearlings, a great return for many years of dedication to try and reach this elite level.

Lakeview flock from Lee Beacom enjoyed a good day, taking second prize and the reserve overall champion, as placed by judged Colin Campbell, Happrew, which then went on to make 7000gns with their powerful lamb. They followed the Temain consignment straight into the ring and the bids continued to flow swiftly. The pen leader was by the £30,000 Hewgill N1 bought out of Hawes last year and out of a homebred ewe by a Parkgatestone tup, and out of a Duhonw bred ewe. He was knocked down at 7000gns.  The same breeding was behind the pens third lamb into the ring, which went for 4000gns, selling to John Mccafferty, completing a great day for Lee, who also took the female championship with a gimmer shearling by M3 Holmview, which later sold for 1500gns.

One of the biggest smiles of the day went to Declan McElhennon who enjoyed a brilliant sale with his second placed gimmer lamb. This sharp, lively lamb is by the N10 Skeughdale that he bought out of Kirkby Stephen last year for £3500 and out of a Hewgill bred ewe that he bought as champion for £1800 several years ago and has proved to be a shrewd investment, non-better than this gimmer lamb which set a new Northern Irish record for a Blue Faced Leicester gimmer, selling for 6400gns to William Bell, who was desperate to get his hands on her!

A brace of lambs made 6000gns. The first of these was from Hugh Henry, Starbog, who had a pen of 8 lambs by Dawyck Frank The Tank, who was an internet sensation last year before he sealed a switch to Northern Ireland in a £10,000 deal and has since produced the goods for the Starbog flock. He was out a homebred ewe which is by a Garscube tup and out of a Cottage bred ewe. He was bought by William Adams. The next at 6000gns came only a matter of minutes later as the Drummuck flock followed Starbog into the ring. His pen leader was by M2 Hewgill and out of a Blarnavaid ewe that he had bought in lamb to the L12 Shafthill. This cocky lamb was knocked down to Adam Porter.

After the record setting sale of last year many eyes were on Declan McKillop and his Giants Causeway flock, and again the quality on offer didn’t disappoint, with a great selection of tups with good colour and great skins. Catching the eye especially was his second lamb into the ring, by the Yore House Maverick and out of a homebred ewe by the Tievebuaile Farm tup that had won Balmoral Show as a lamb and has done well within the flock. This corker was bought by Paul Sammon from Tipperary.

The Days champion came from the Holmview flock and was by the 14,000 Aughaboy Nutter which took the overall champion at the progeny show this year, along with taking the champion mules and champion Bluefaced Leicester progeny classes too. He was out of a homebred ewe by J1 Carry House, full brother to the noted Jackpot He came into the ring late in the day, and sold for 2000gns, selling to Gavin Browne, who surely bagged himself a bargain. 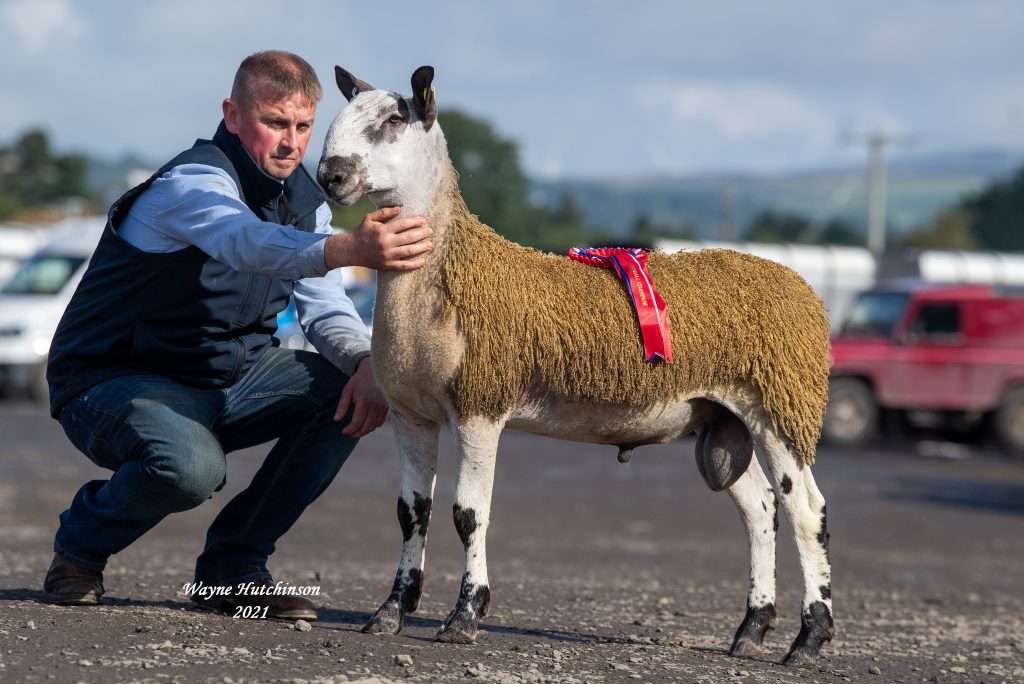 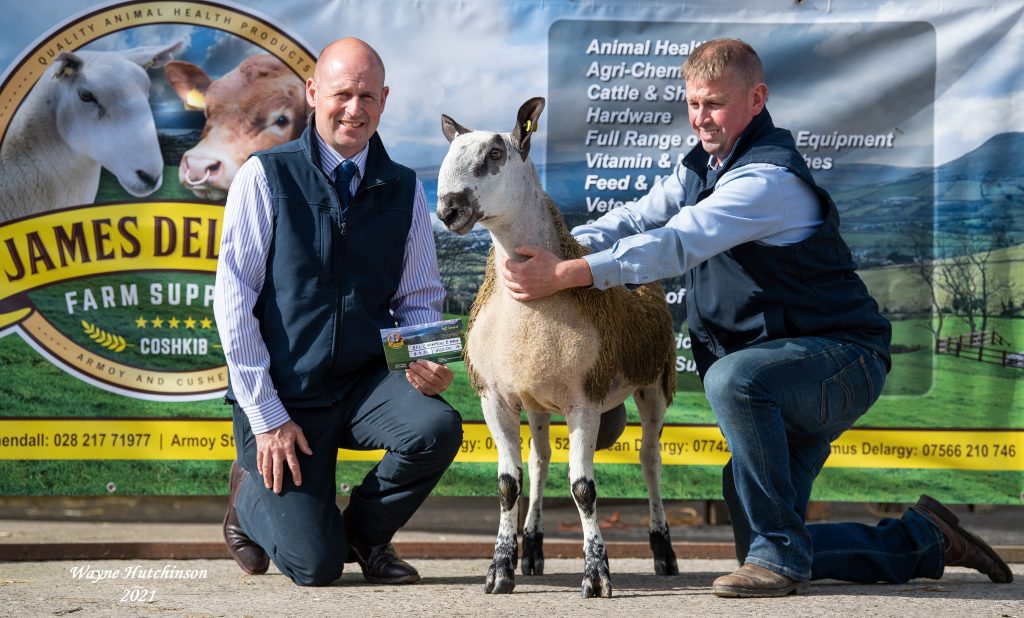 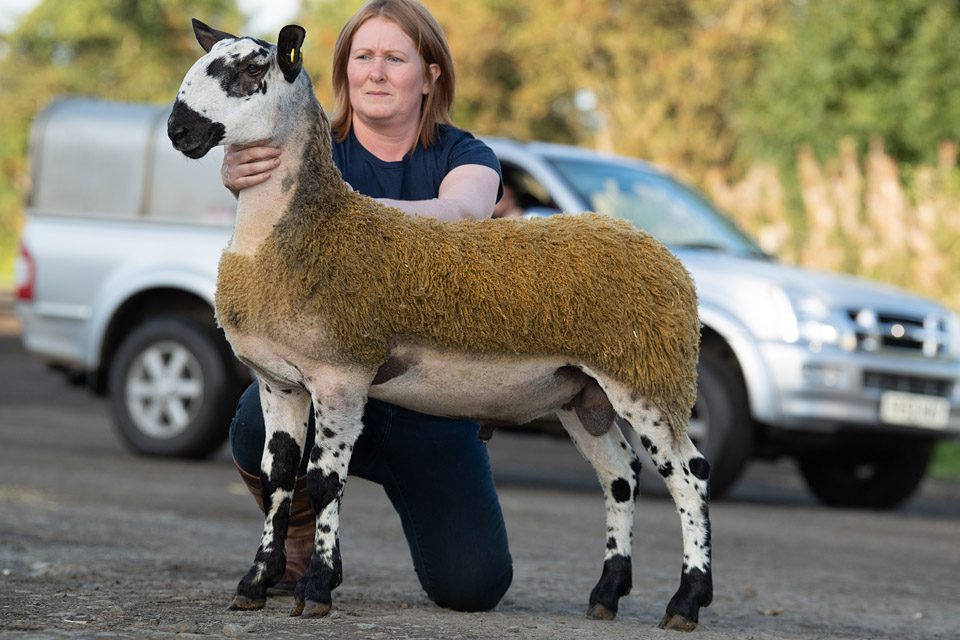 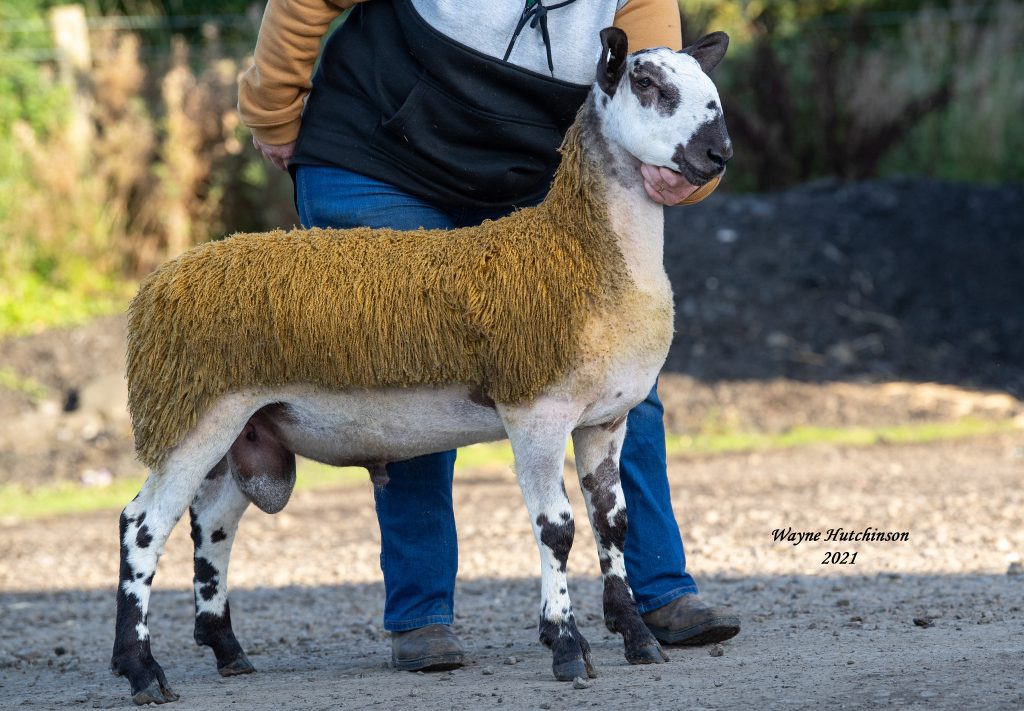 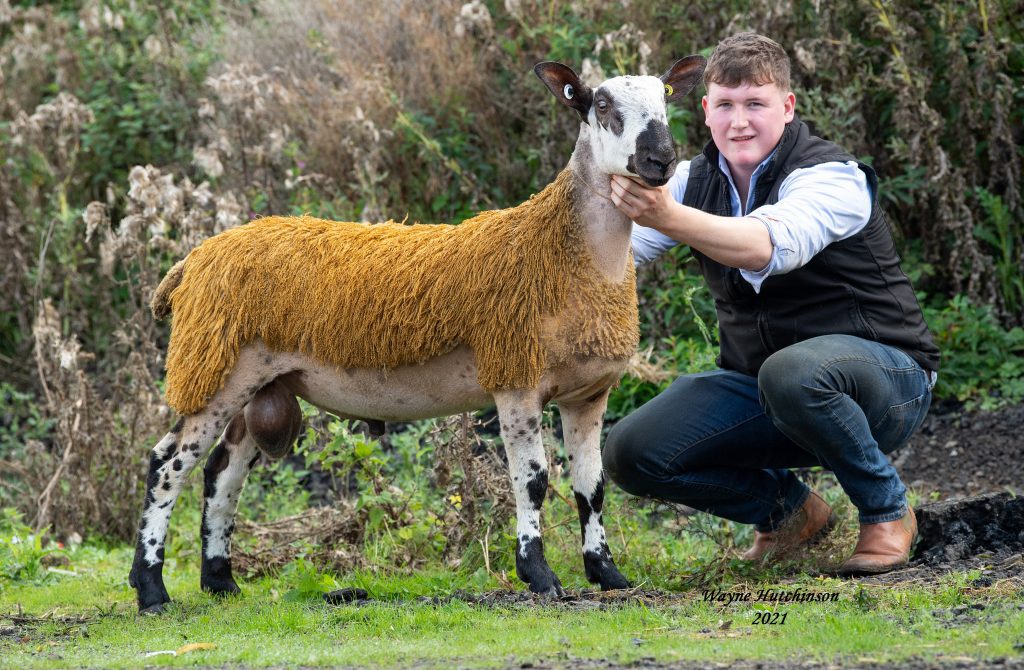 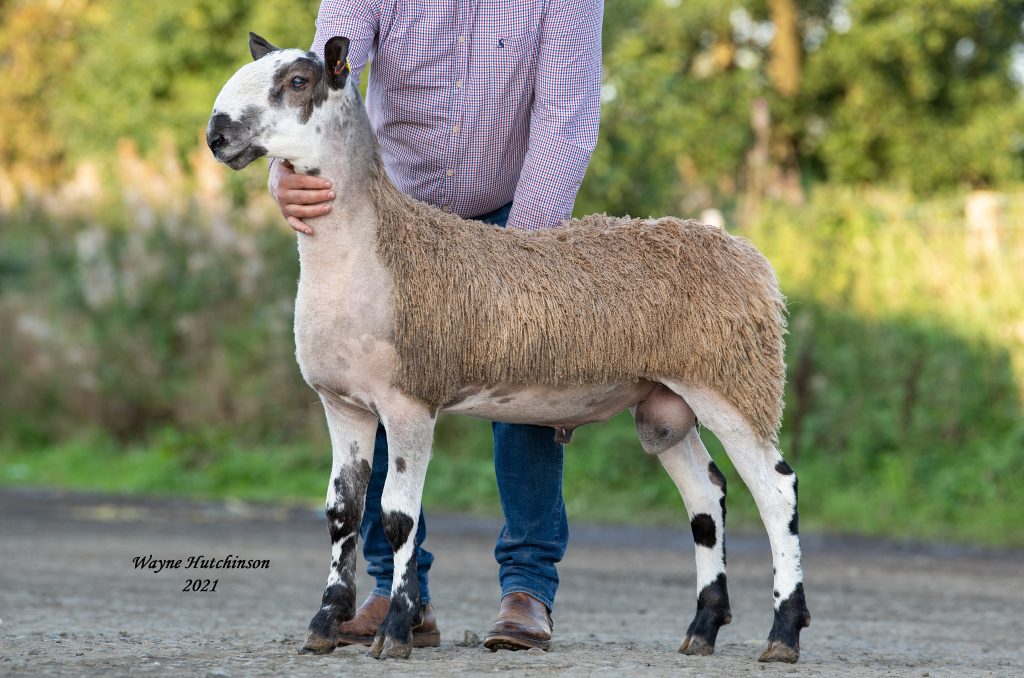 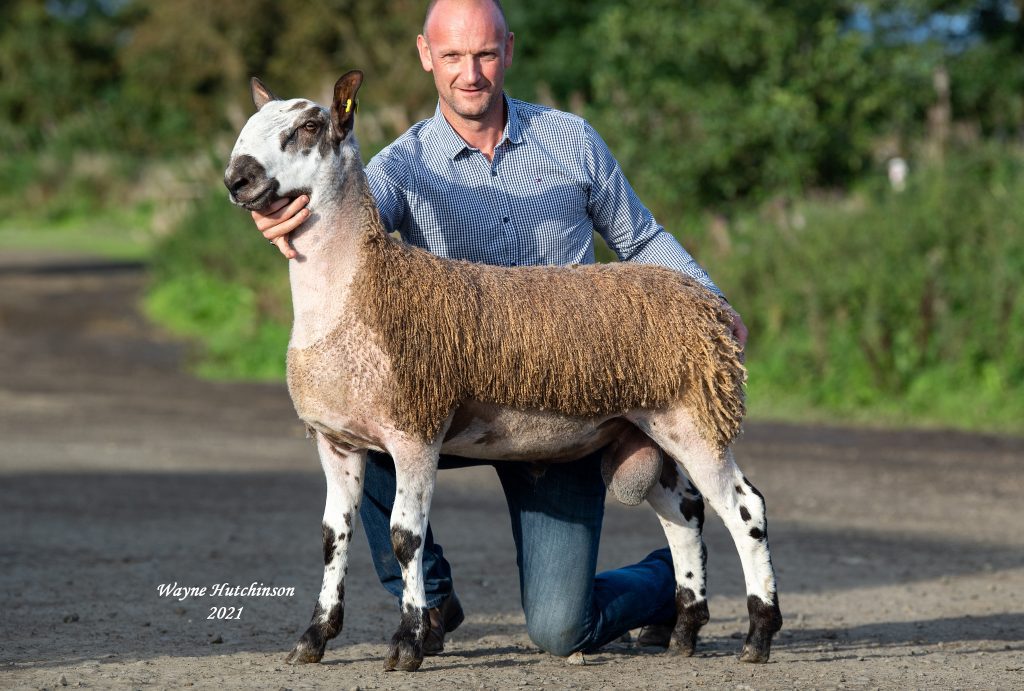 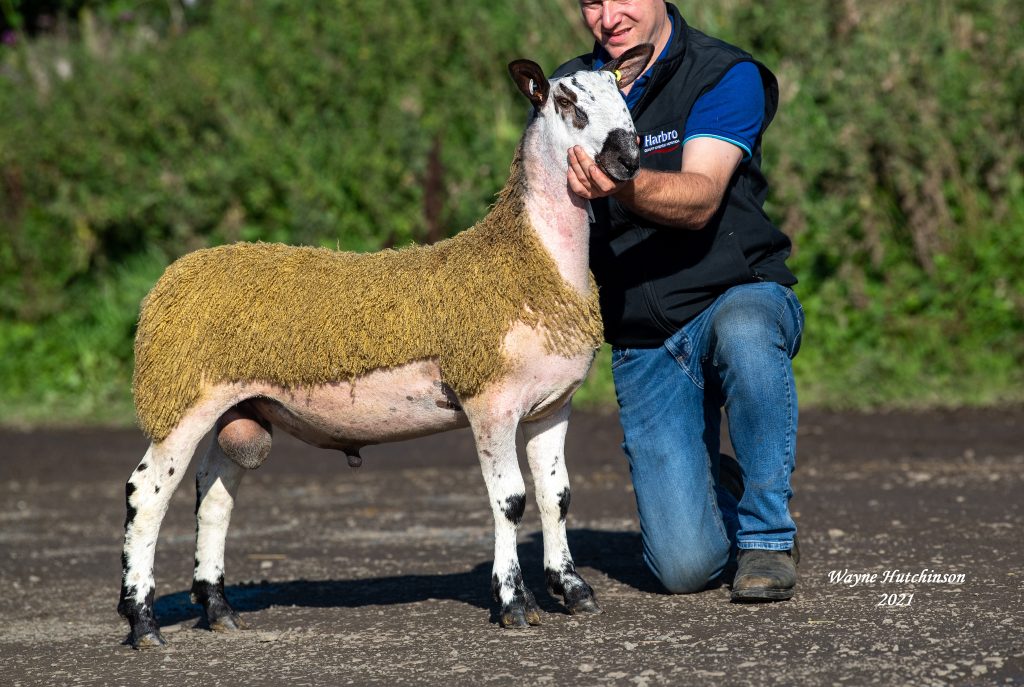 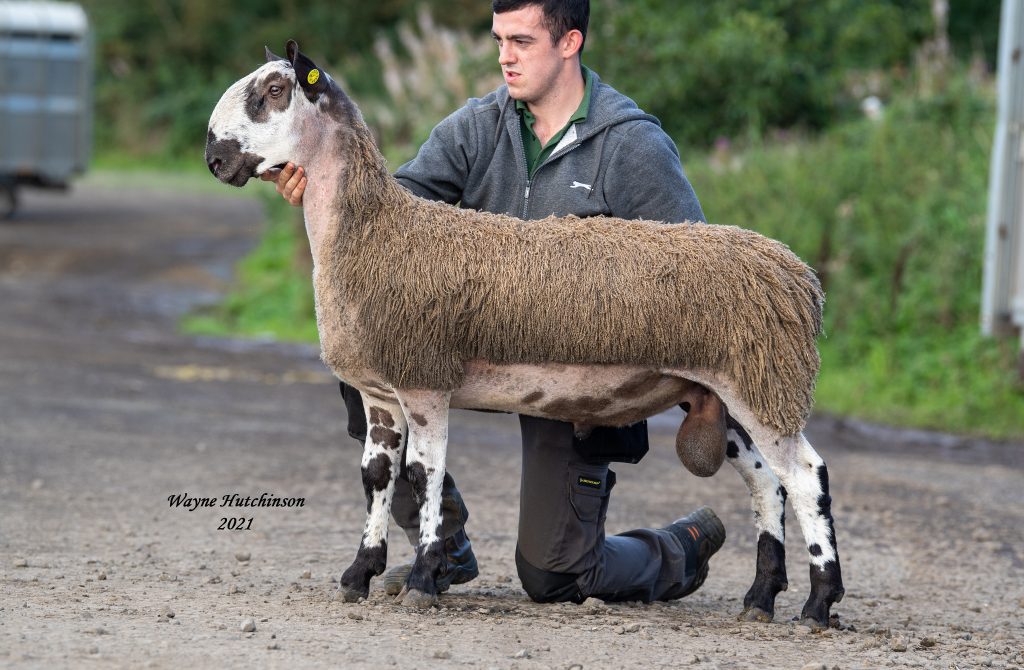 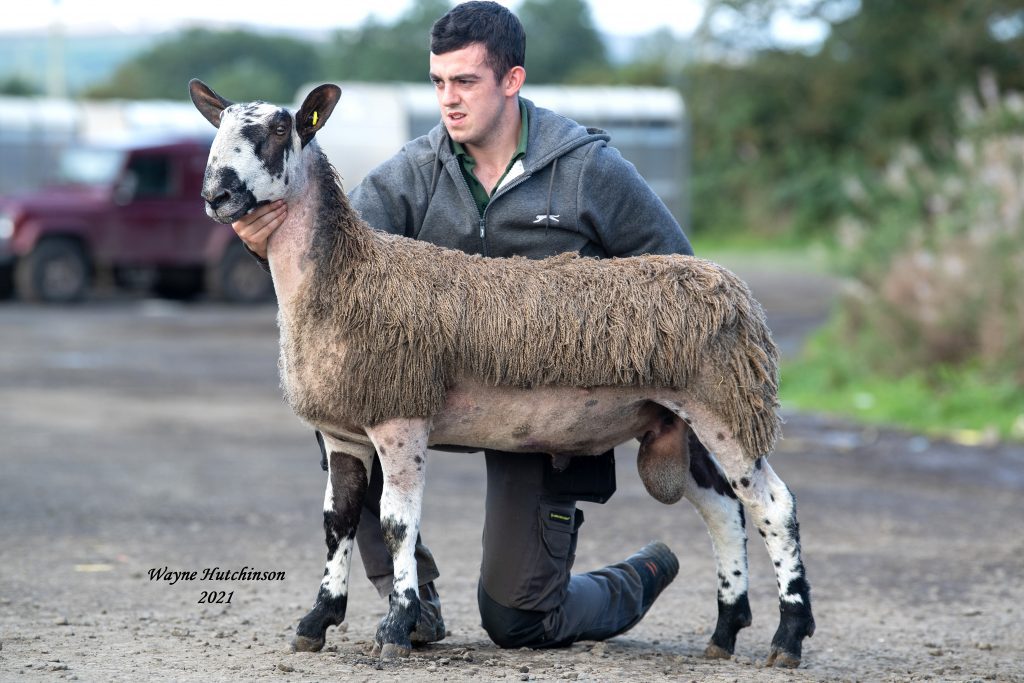 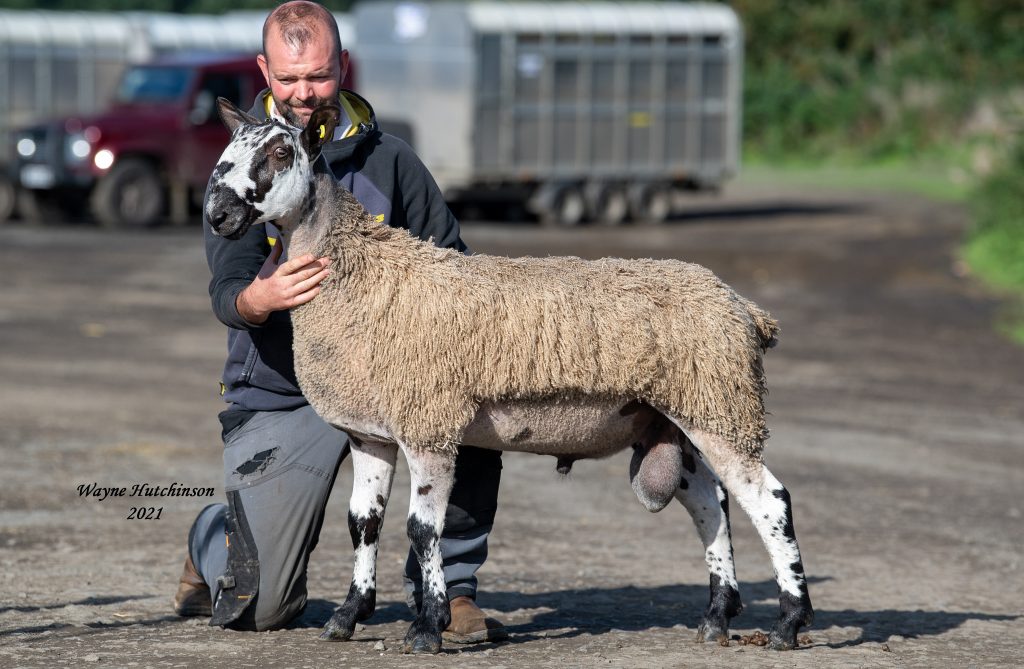 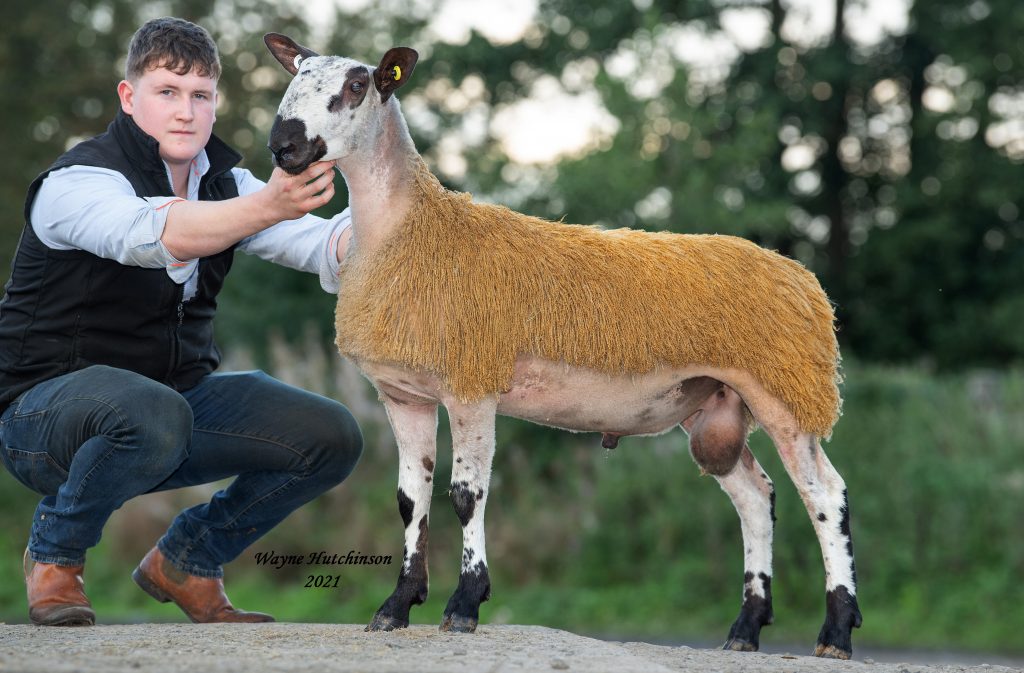 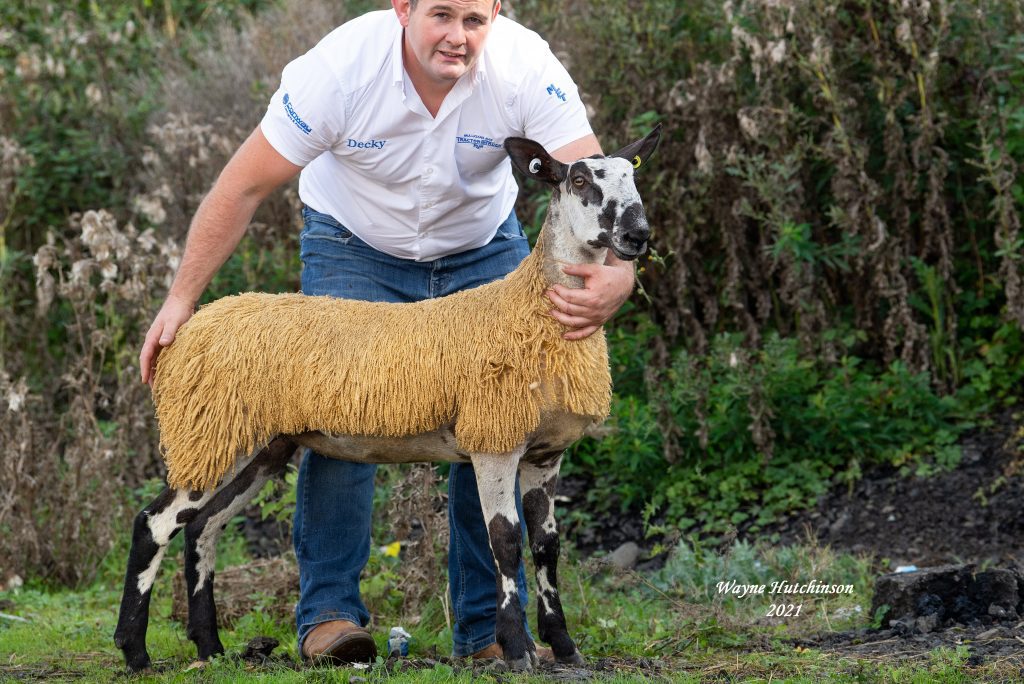 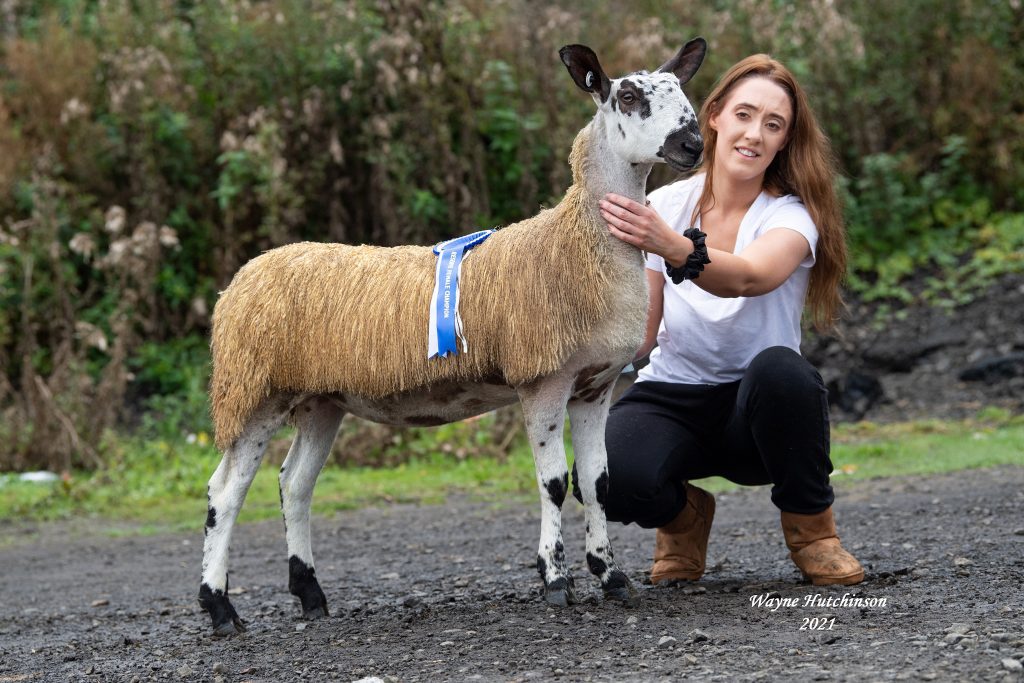 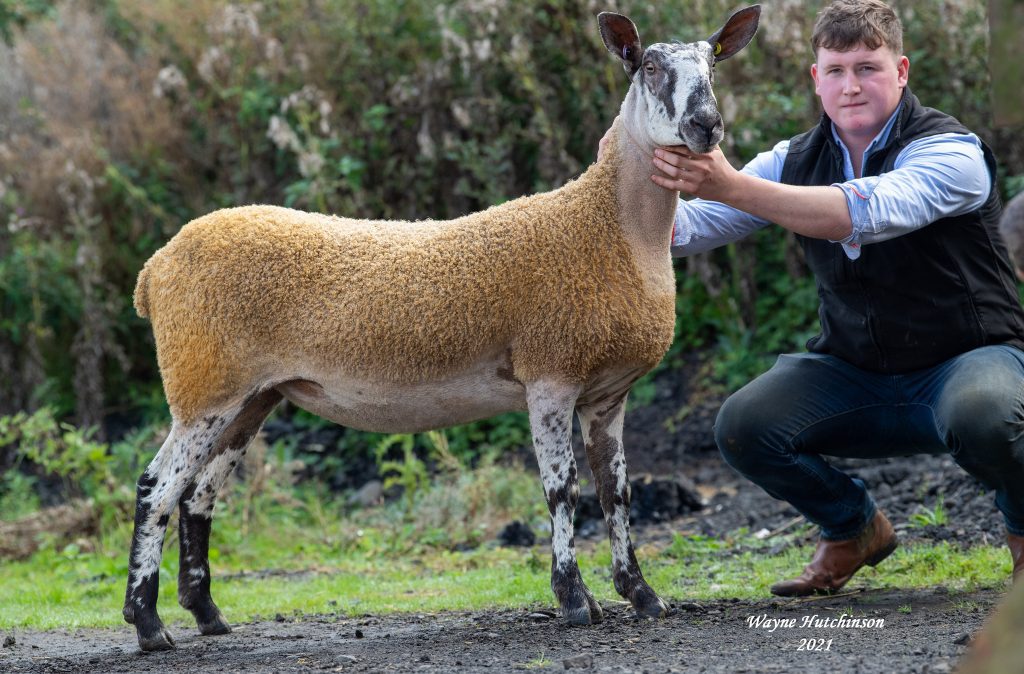 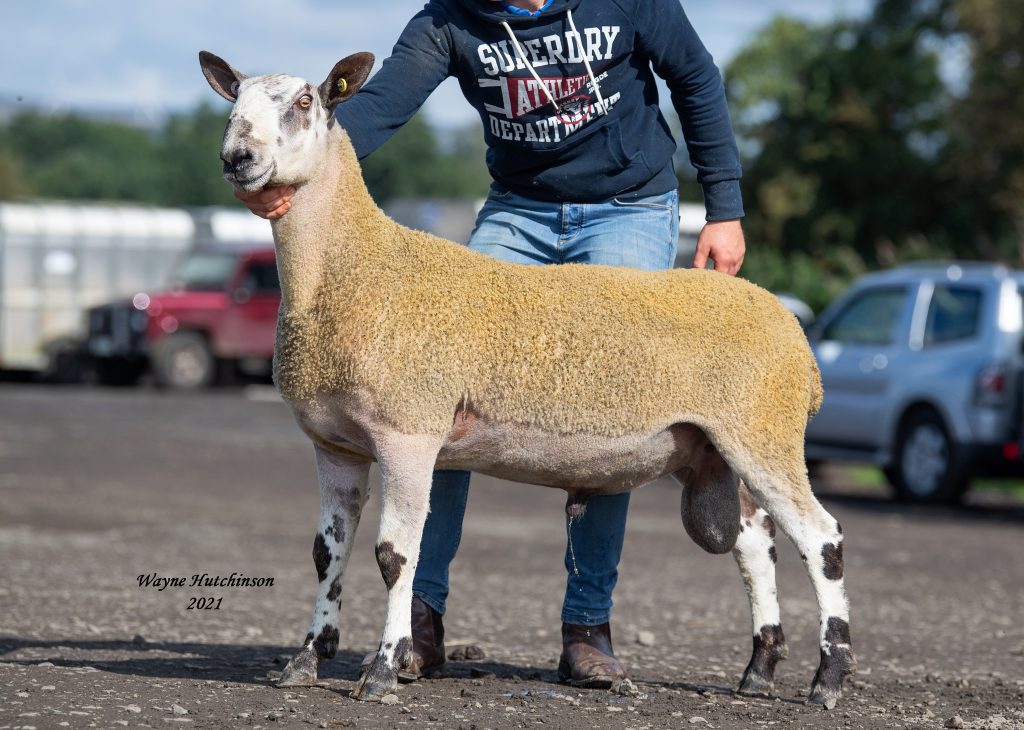