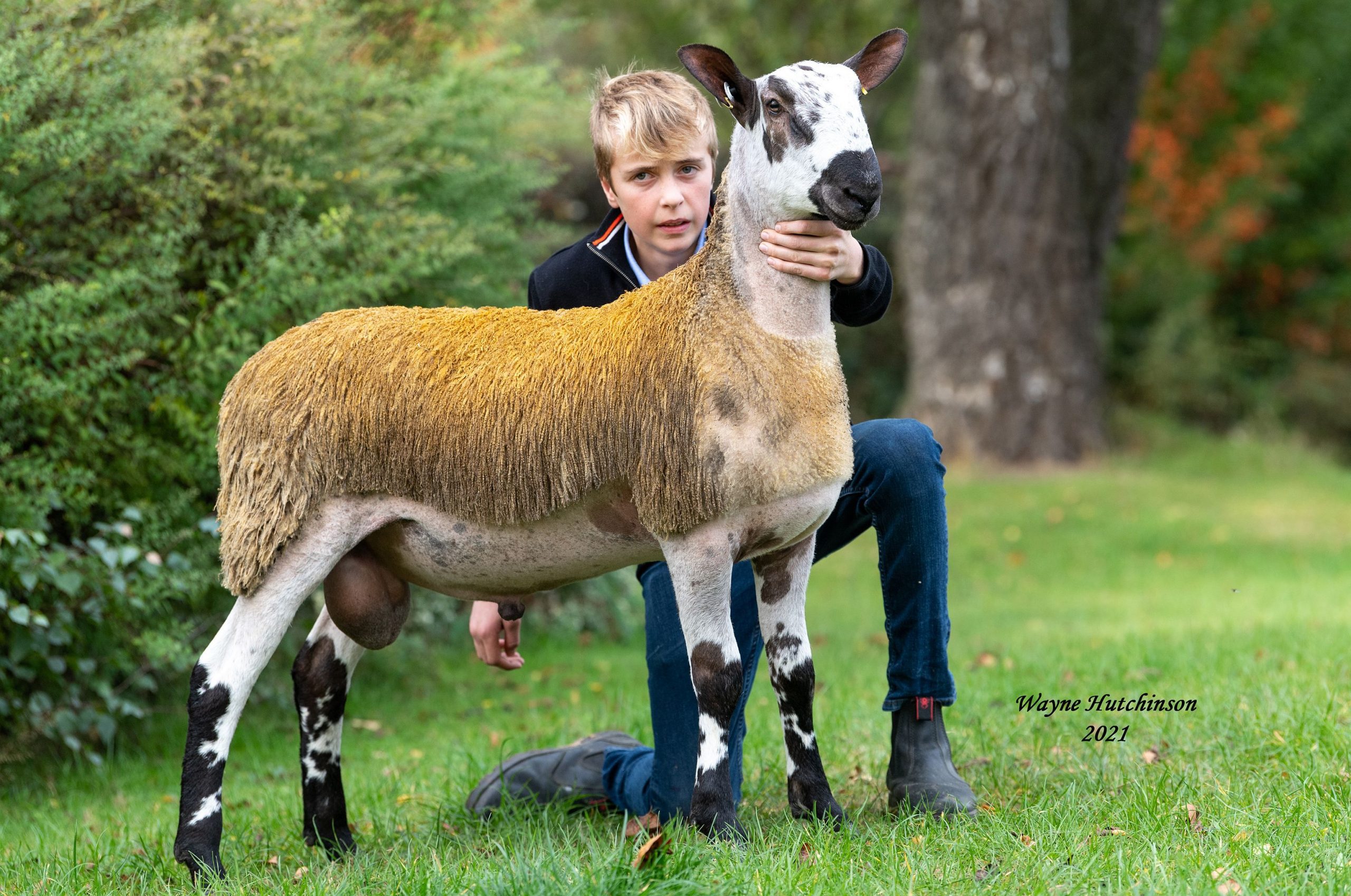 The curtain finally fell on the autumns’ trading in the Bluefaced Leicester circles and after a lot of successful sales and several thousand rams finding new homes, it was the turn of the Carlisle sale, which combines some of the best sheep from both sections of the breed and with nearly 950 sheep catalogued through 3 different rings it was always going to be a busy day for everyone involved, from the vendors to the inspectors, buyers, auctioneers and more importantly the photographer!! When the dust settled at the end of the sale, there was a sense of satisfaction throughout the sale with averages well up throughout all sections, highlighting the buoyancy of the sheep sector, and the breed, which is the focal point for a large part of the national flock.

Topping the trade in the crossing section was a smart, proud lamb from the Marriforth flock. This one was by the M4 Greenriggs, the sire behind the sale toppers at Hawes and Carlisle last year, and has been doing the business again this year, siring one at Hawes selling to Hewgill for £5500. This one at Carlisle was out of the full sister to the mother of the Hewgill tup, by the Carry House that Marrifoth ran. The Marriforth flock were the second in the ring and helped set a strong trade through the day as their lamb sold for £9000, selling to Messrs Jones, Underwood, Builth Wells.

Midlock were once again among the big bucks, selling their pen leader, a son of the M1 Riddings, for the second top price on the day, with a bid of £8000 for this powerful modern lamb. He goes back to Marriforth breeding on his mother’s side, and a combination of power and colour had the punters flooding into the pen. It was a joint deal landing the tup with Messrs Fallows, Burnton Farm, and I Borthwick, Galashiels, combining to hand over the readies for this one and levelled up for the sale with £2916 for their 6 tup lambs.

The Thornborrow family from Dawyck continued in a rich vein of form after their good run at Hawes, with a bid of £5500 for their pen topper. This one was by the Giants Causeway tup they bought out of Ballymena last year for £23,000 and out of a ewe by J22 Hewgill. He sold, after some brisk bidding, to the Quarry flock from Messrs Browell, Hexham. The Dawyck flock saw another son of the Giants Causeway hit £3000, closing out a great autumn for them in the Blue Faced Crossing sale rings.

A trio of tups hit £5000, the first of these was a shearling from the noted Nunscleugh flock from Harry Gass. This powerful shearling was a combination of good true crossing bloodlines and overall power, a proper “Back to the Basics” tup according to one of the buyers. By the homebred Nunscleugh J15, which is a son of the E1 Hewgill, one of the more noted bloodlines within the breed and out of a ewe by the Midlock Mustang son, Midlock Big Ben. He was at last years sale as a lamb, but didn’t get bid high enough, so Harry took him home and used him, where he did well, getting some good young lambs in the run. He was knocked down in a three-way split to Midlock, Firth and Hamildean.

Next at the £5000 figure was a smart lamb from Val Edmondson, with Manesty P1, a son of Skeughdale N4, a son of L33 Hewgill, which they bought last year for £2200 and has been a revelation in their flock, selling lambs at Lazonby averaging £139 for their run, with the Skeughdale putting 4 in their top pen. He is out of a Lakethwaite ewe that the bought out of Hawes last year as a gimmer shearling for £1800, the top price on the day. He was knocked down to Robert McTurk, re-investing some of the cash he made at the Castle Douglas sale with his Barlaes shearling.

Another at £5000, later in the sale came from the respected Alwinton flock from G Dixon. This powerful lamb was by the Tintoside tup they are using, and has done well for them, out of a ewe by an Orra View tup. This one sold to John Park, Dalpeddar Farm.

Other notable prices saw a bid of £4200 for Jamie Pirie for a son of his homebred tup J14, which goes back to Highberries Hotshot, out of a Carry House ewe by the noted G34 Midlock. This one sold to Andrew Paton, Maybole. Later in the day a brace hit £4000, the first from BWF Blues, run by Benson Wemyss, This one by Allanfauld M5 sold to G G & M A Long, Longstark Flock. The next at £4000 was out of the next pen into the ring from Neil Marston and Mary Dawson, with their Highberries flock. This one, P23 Highberries, stood second to the pre-sale champion and was by the M9 Carry House, a son of Carry House Flash, and out of one of Marys own ewes by L3 Low Tipalt.

Mike & Ella had a long trip from Builth Wells with their load of lambs, but the journey was worthwhile as they took the days championship with a solid tup lamb by the £17,000 Low Tipalt out of Hawes last year. He sold for £3200 to TW Hamilton, Kirkton of Crawford. 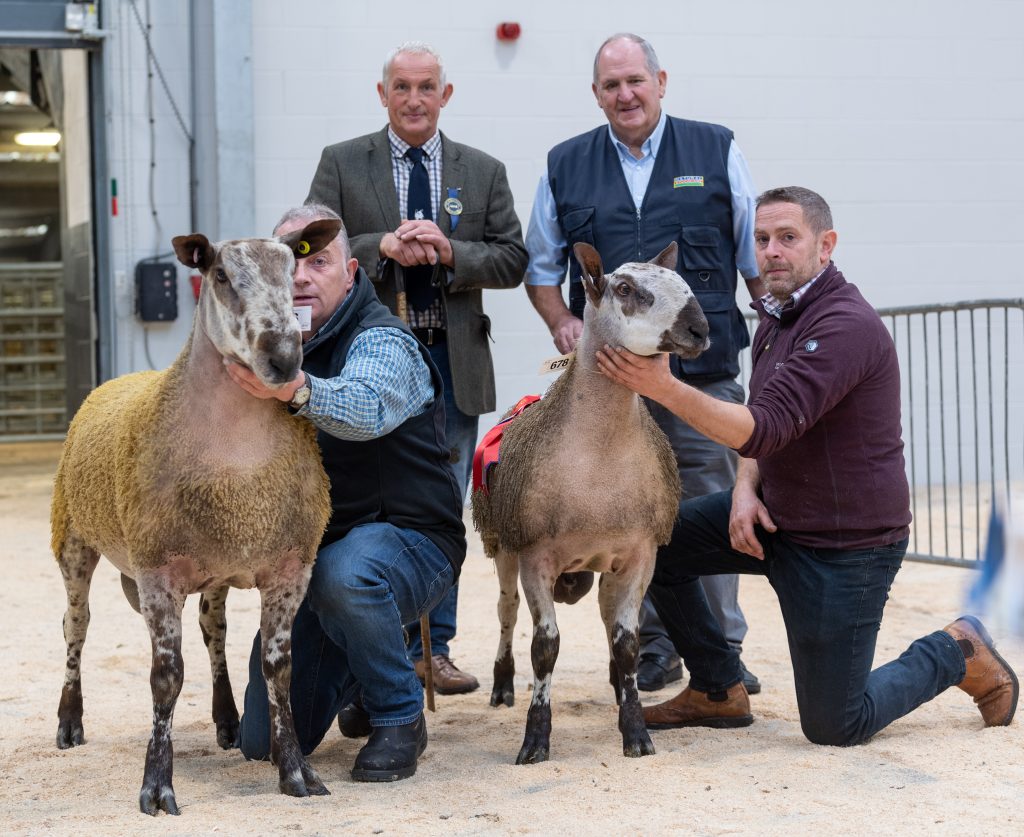 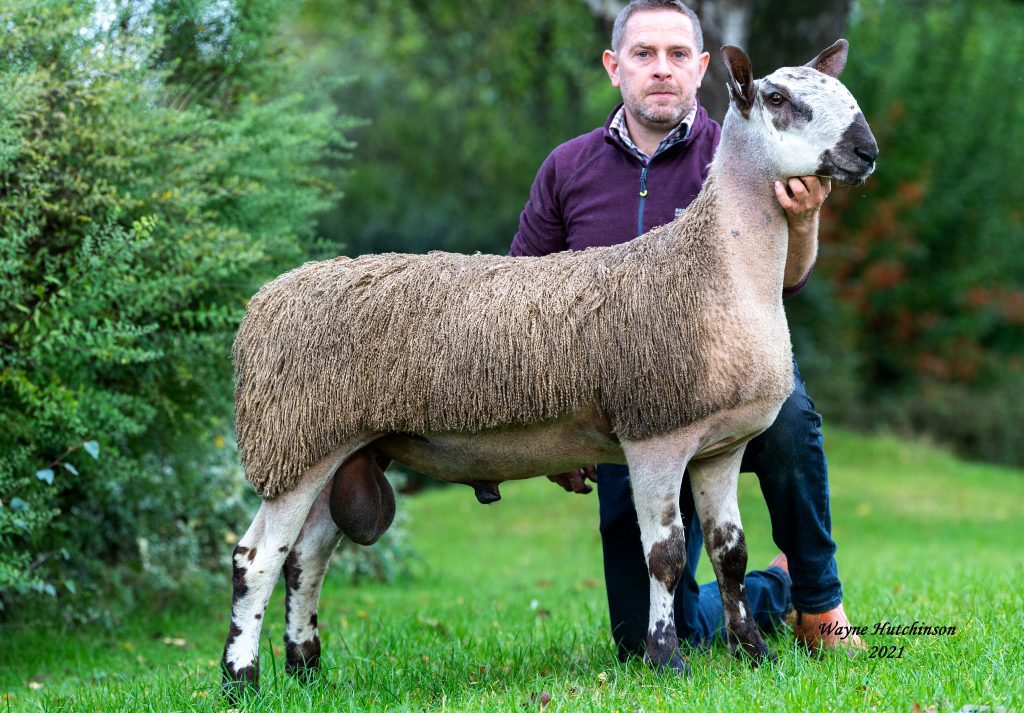 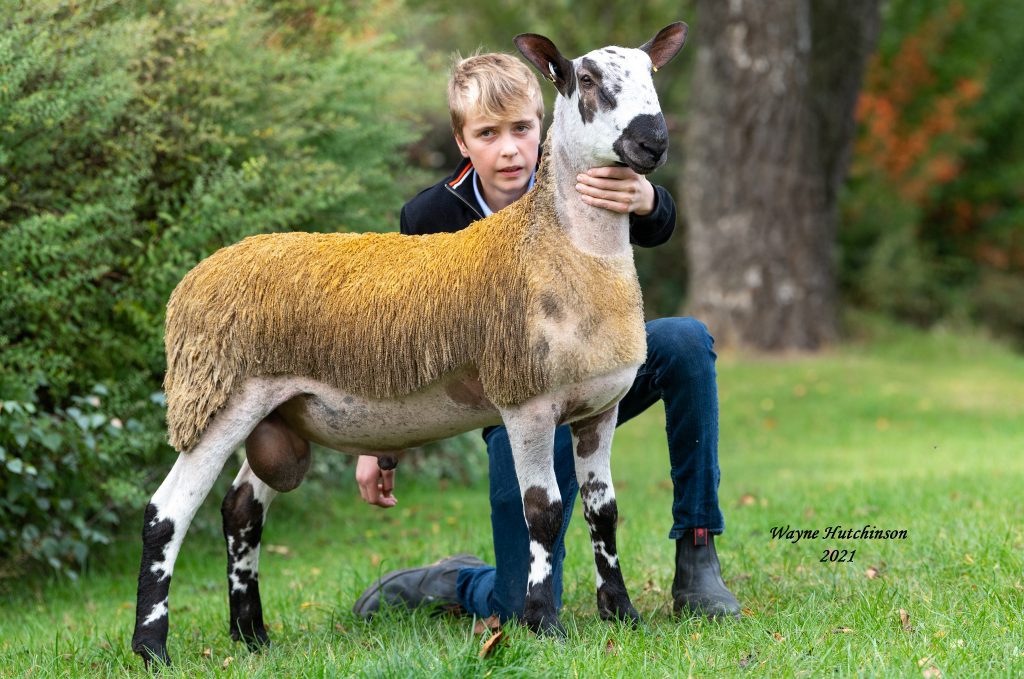 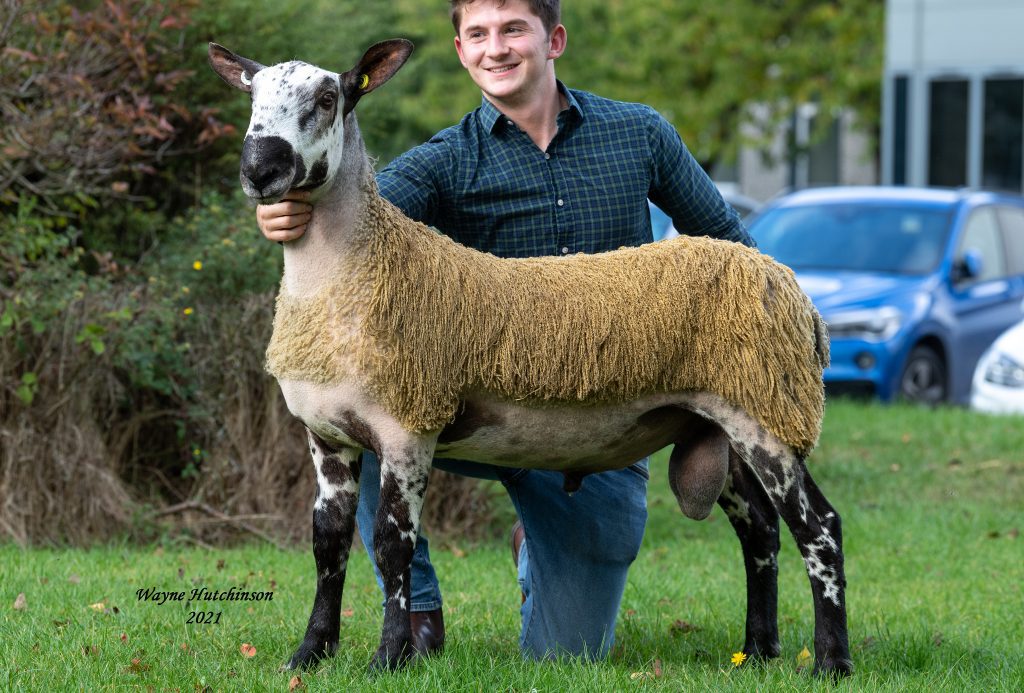 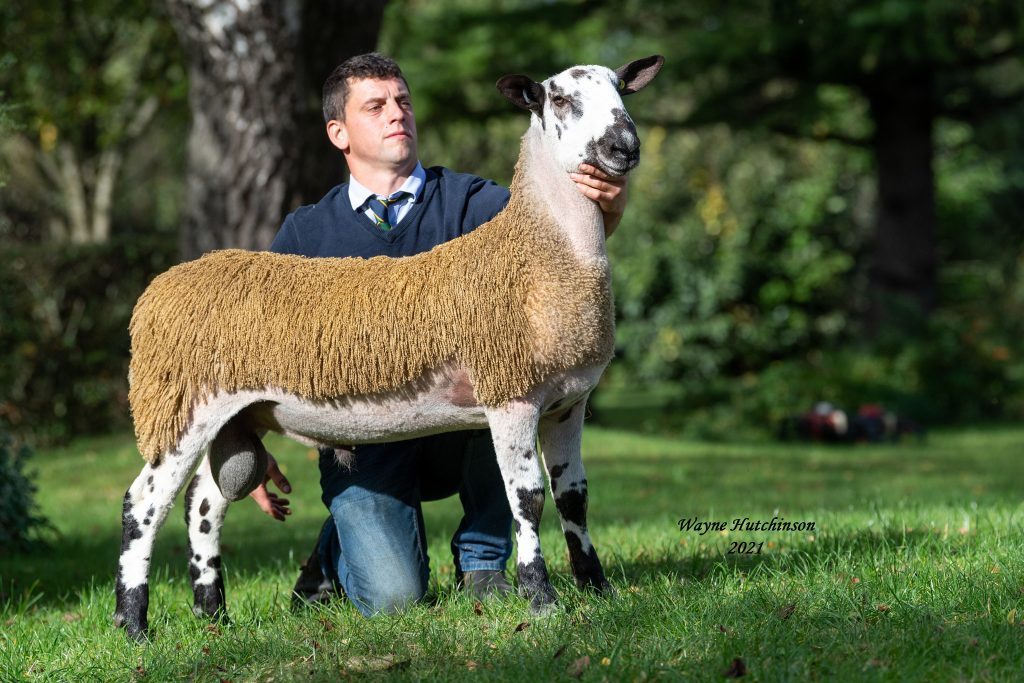 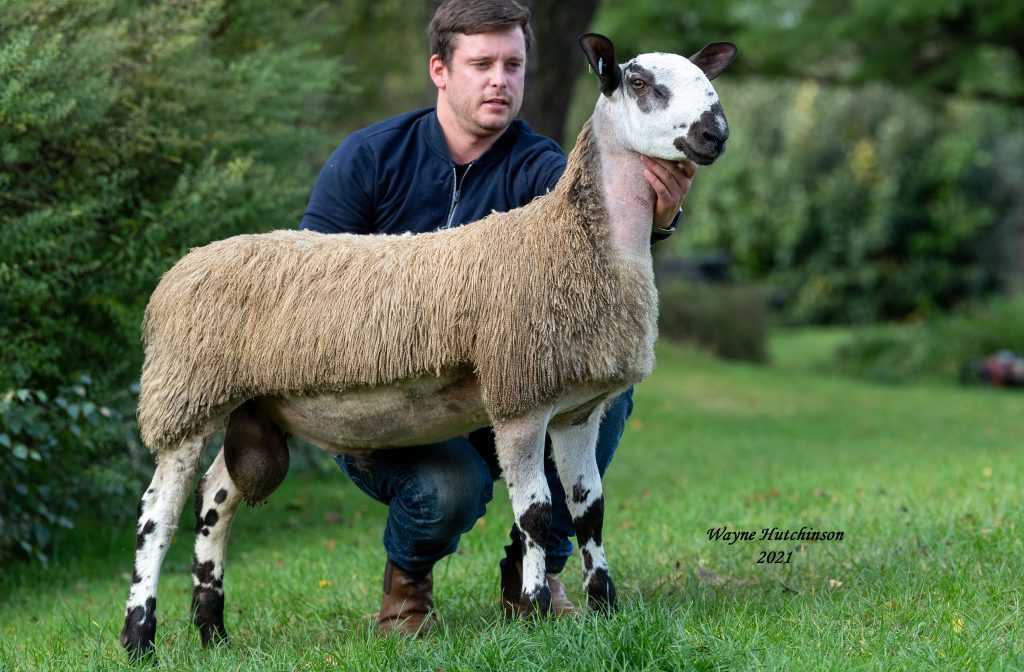 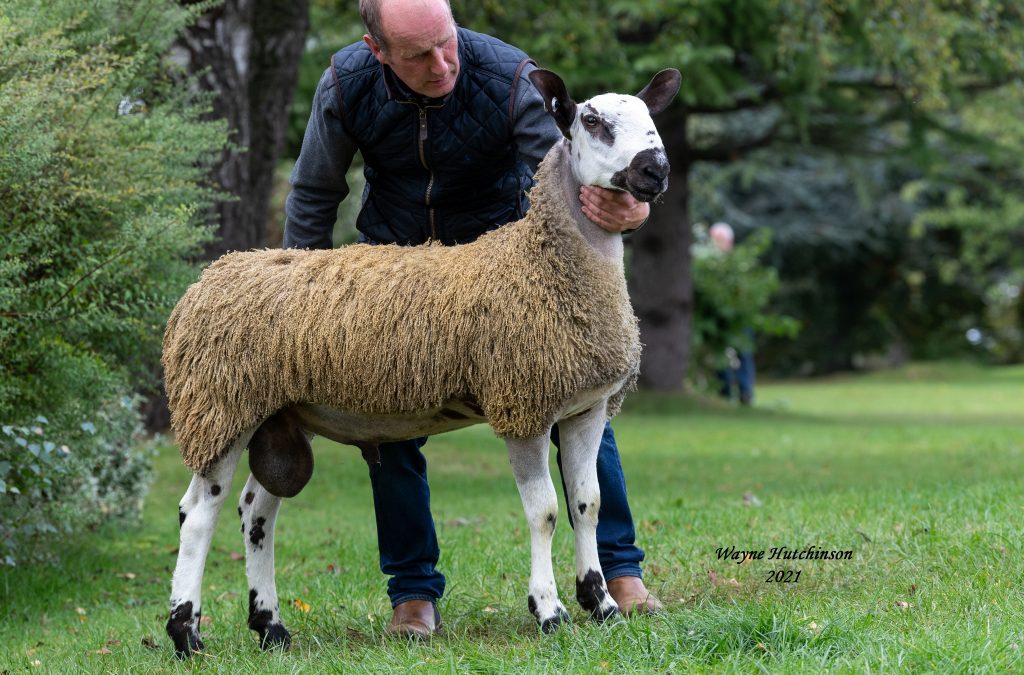 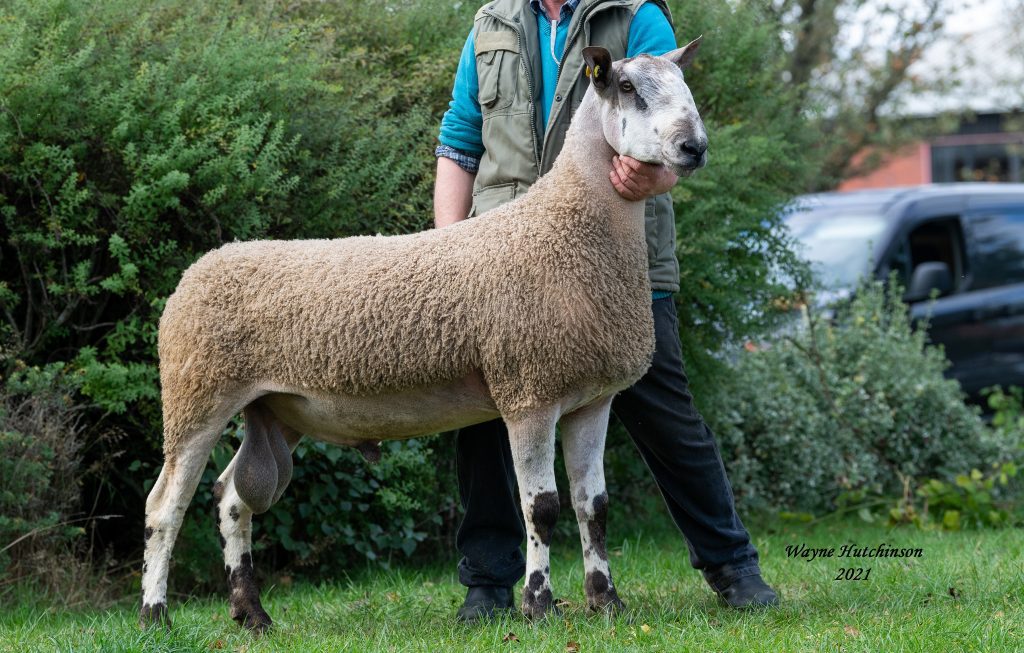 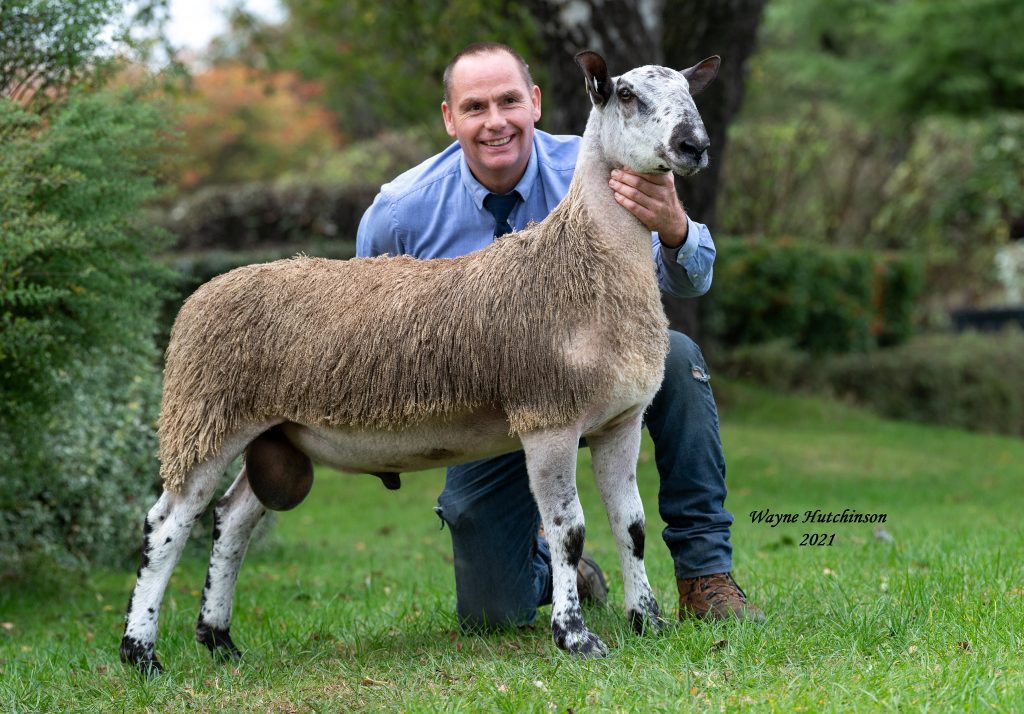 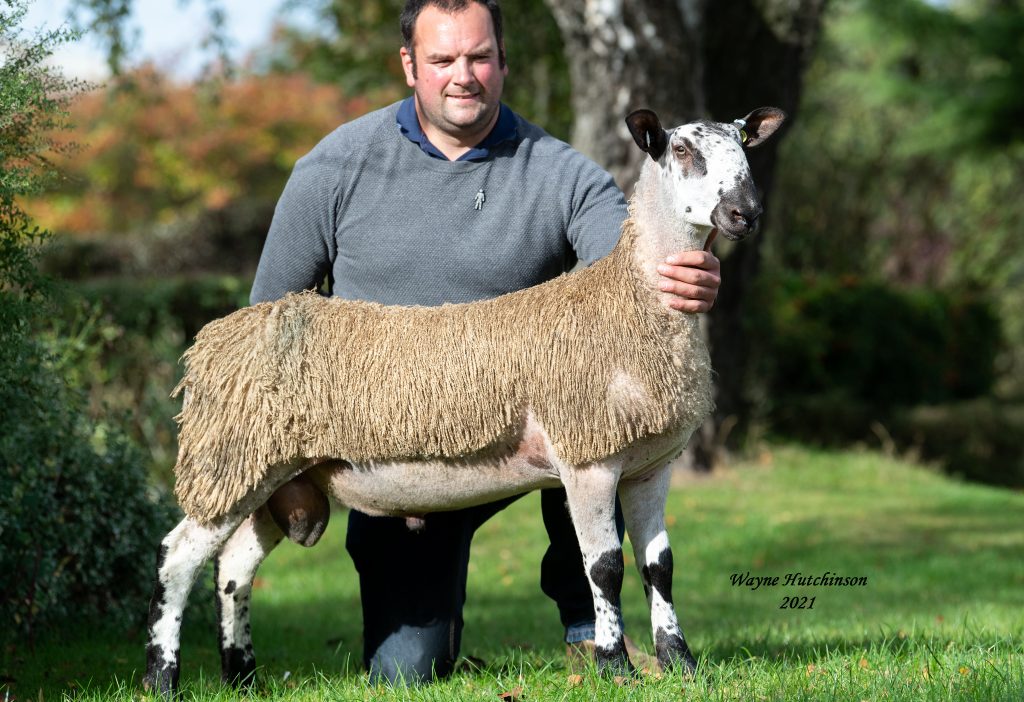 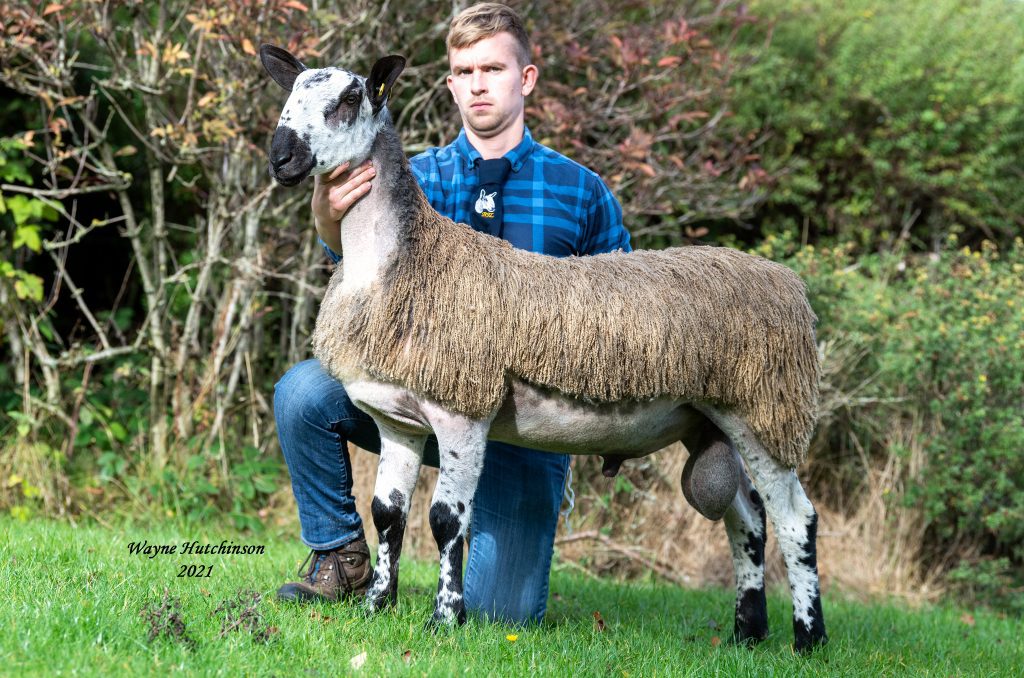 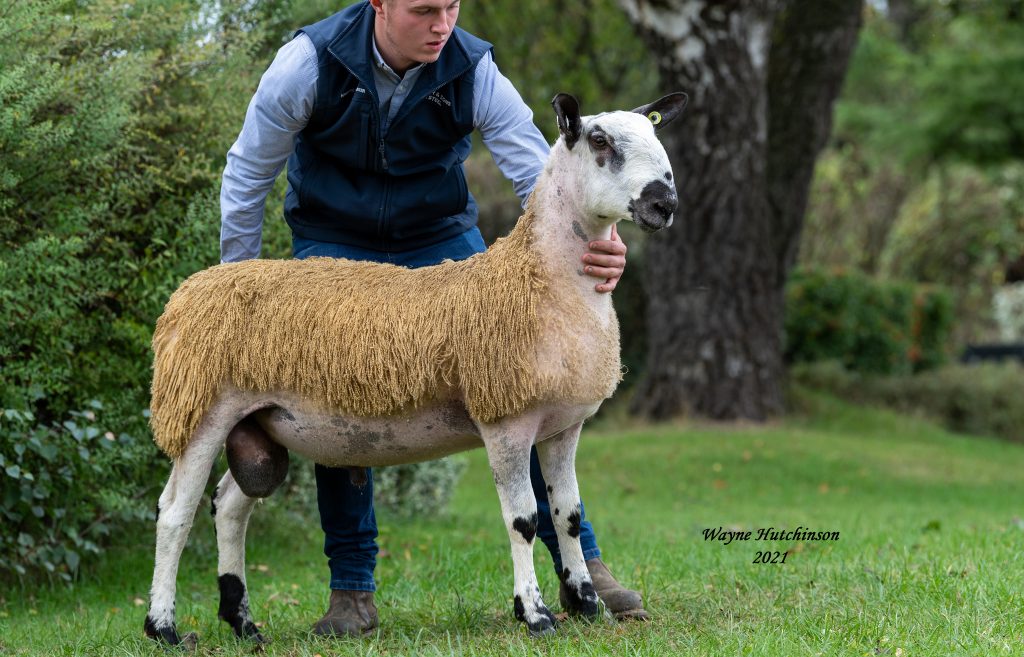 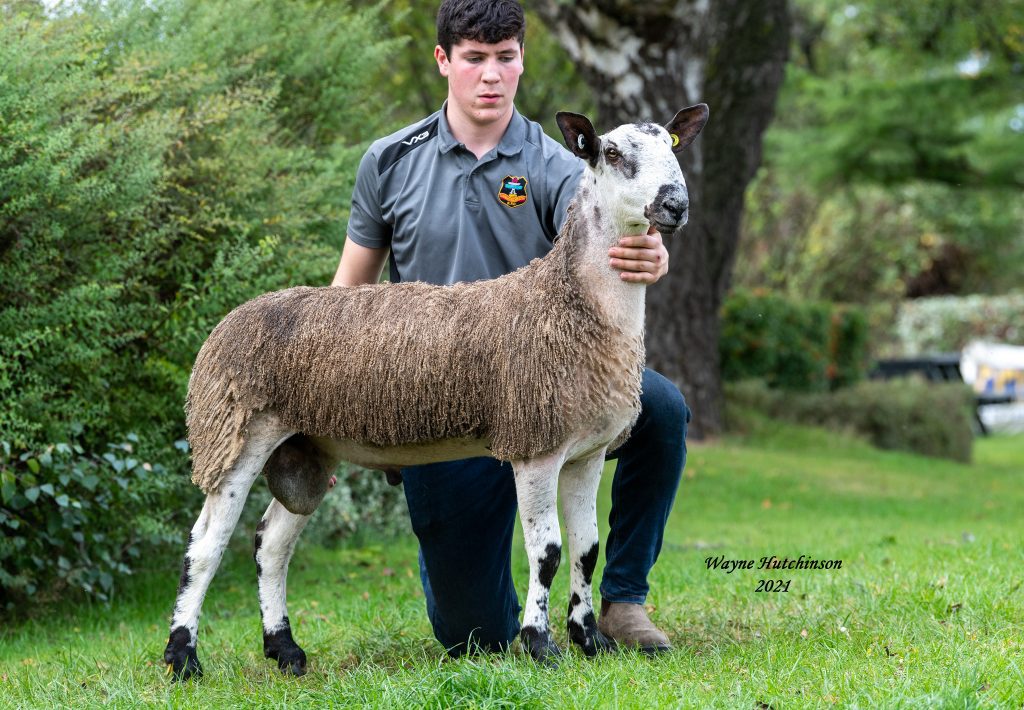 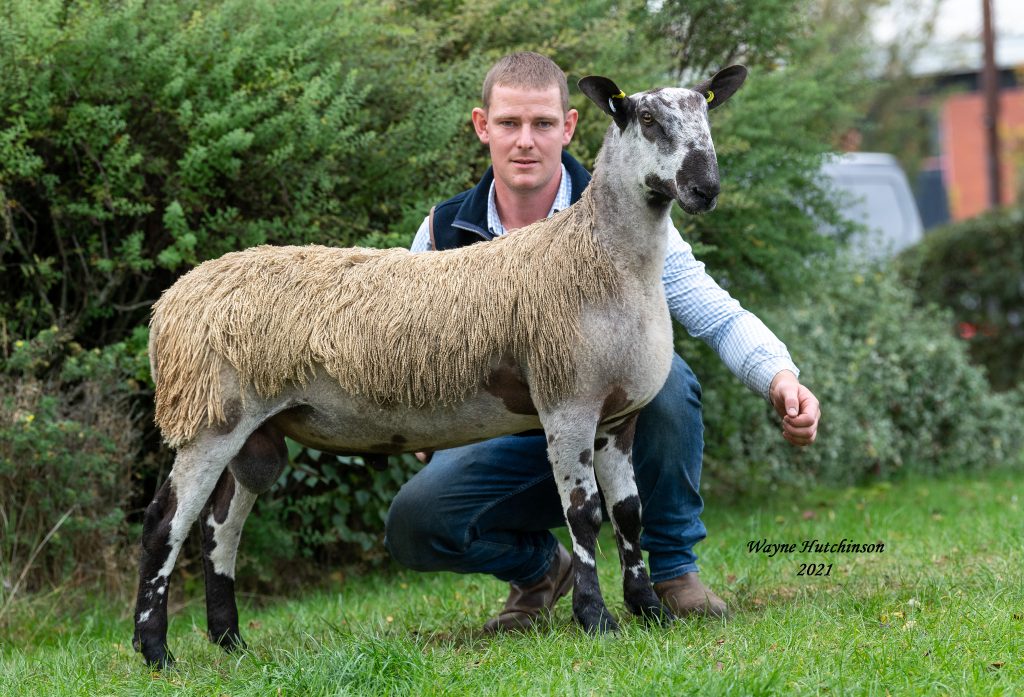 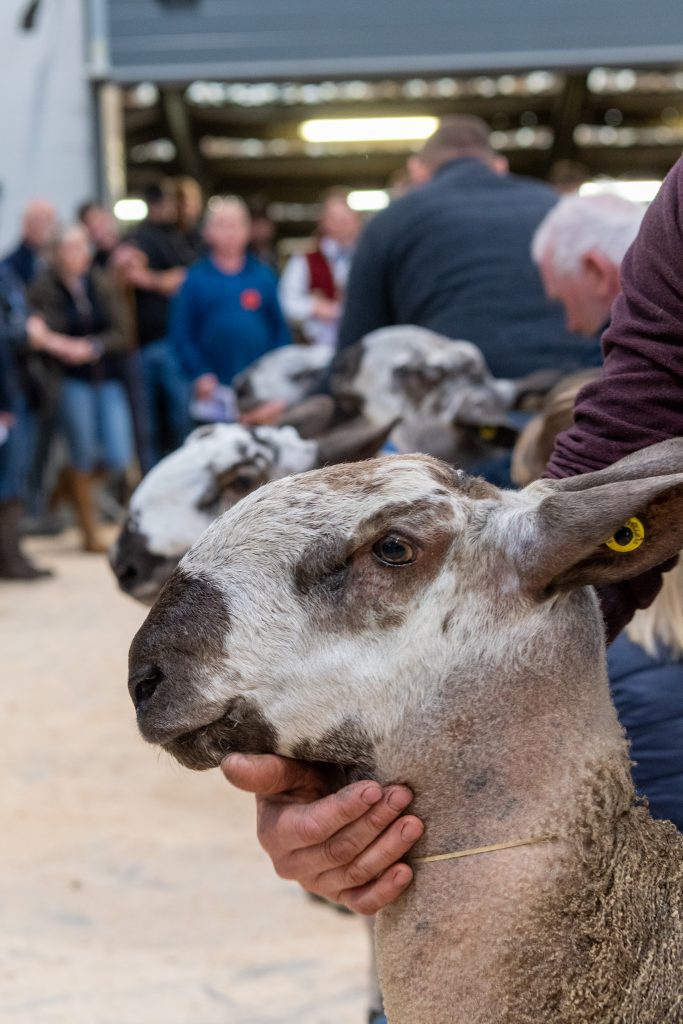 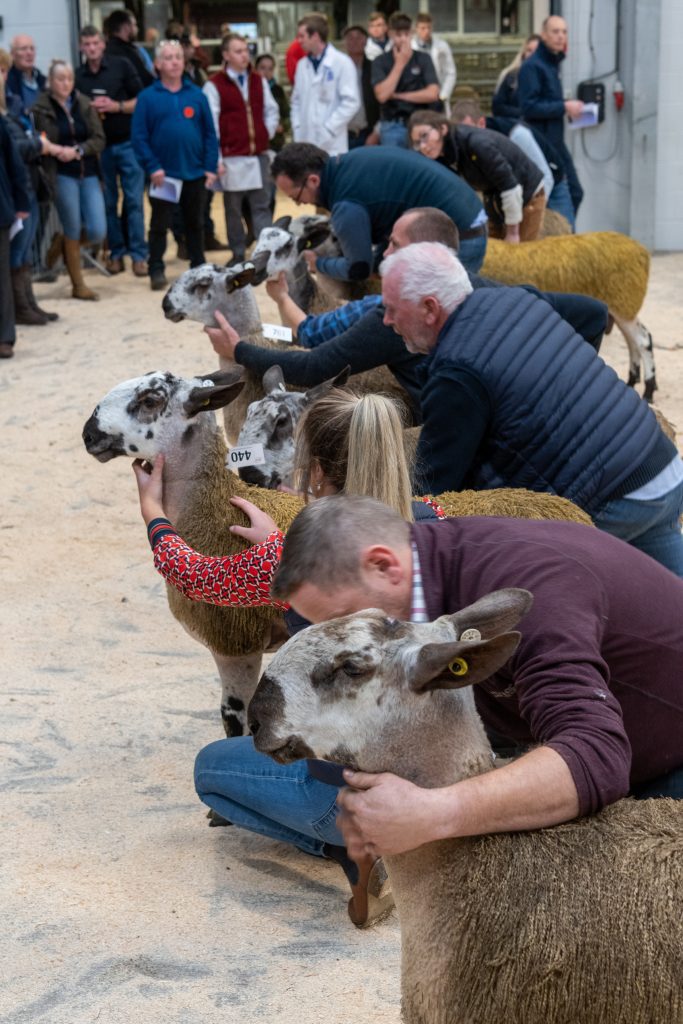 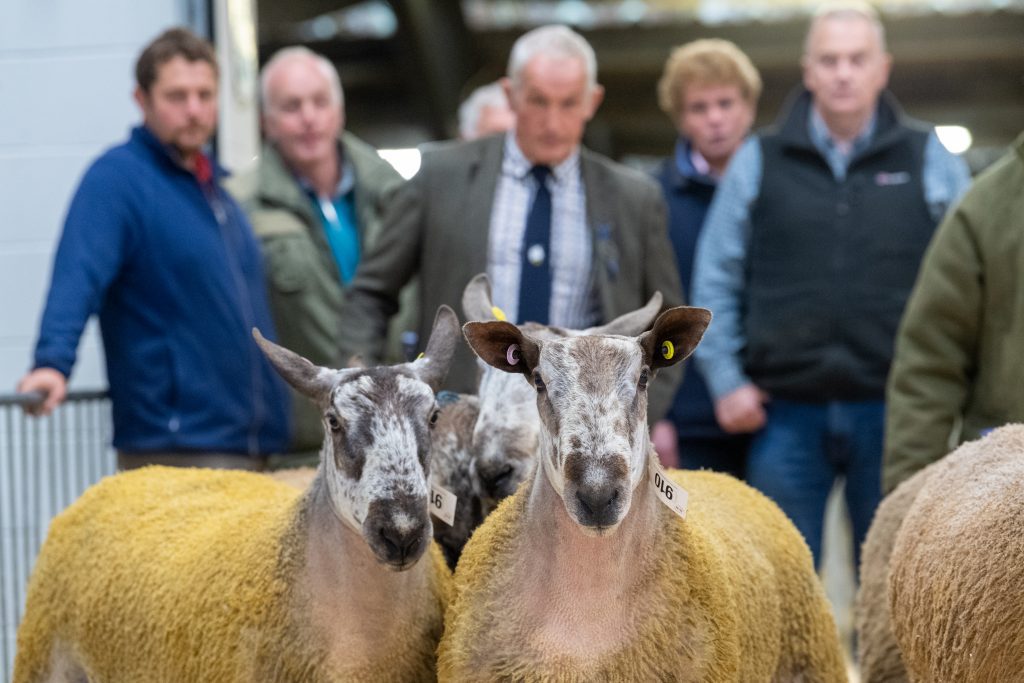 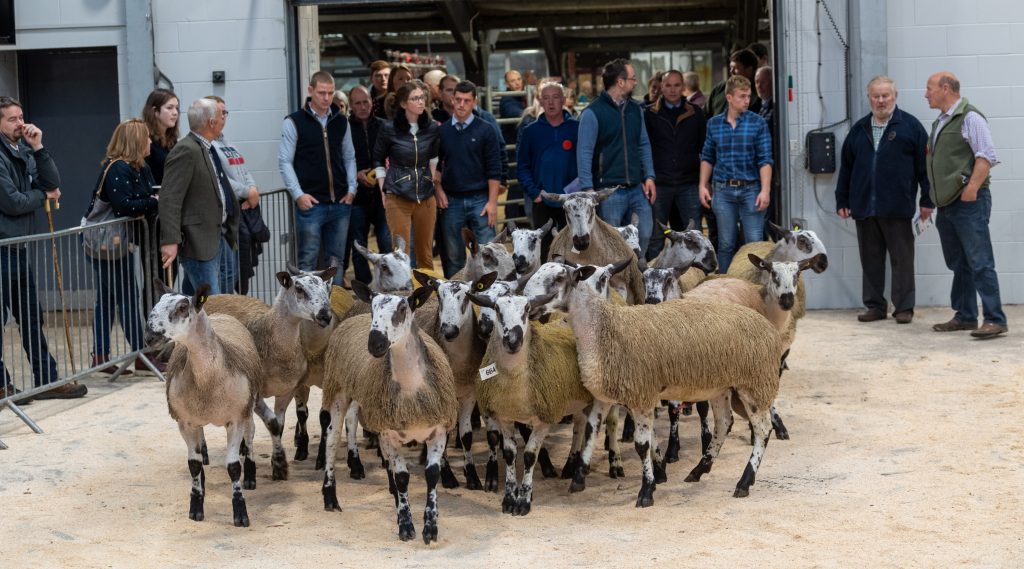 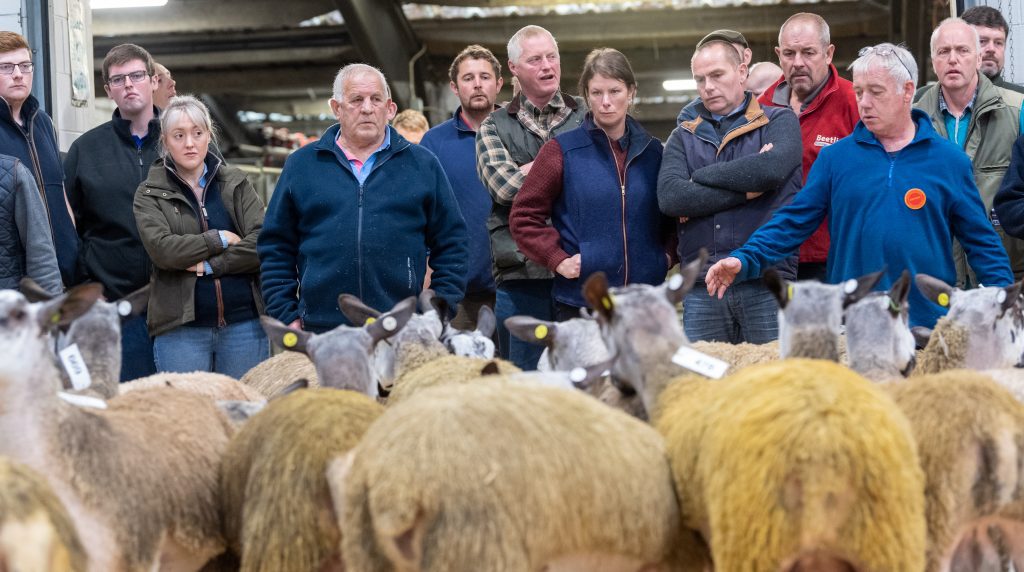 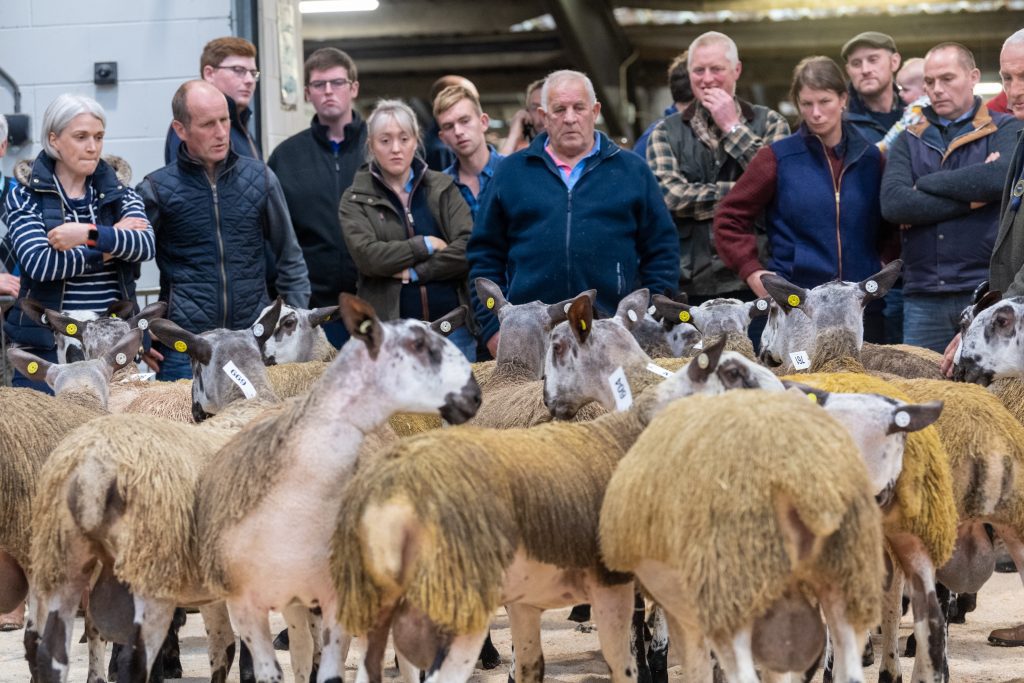 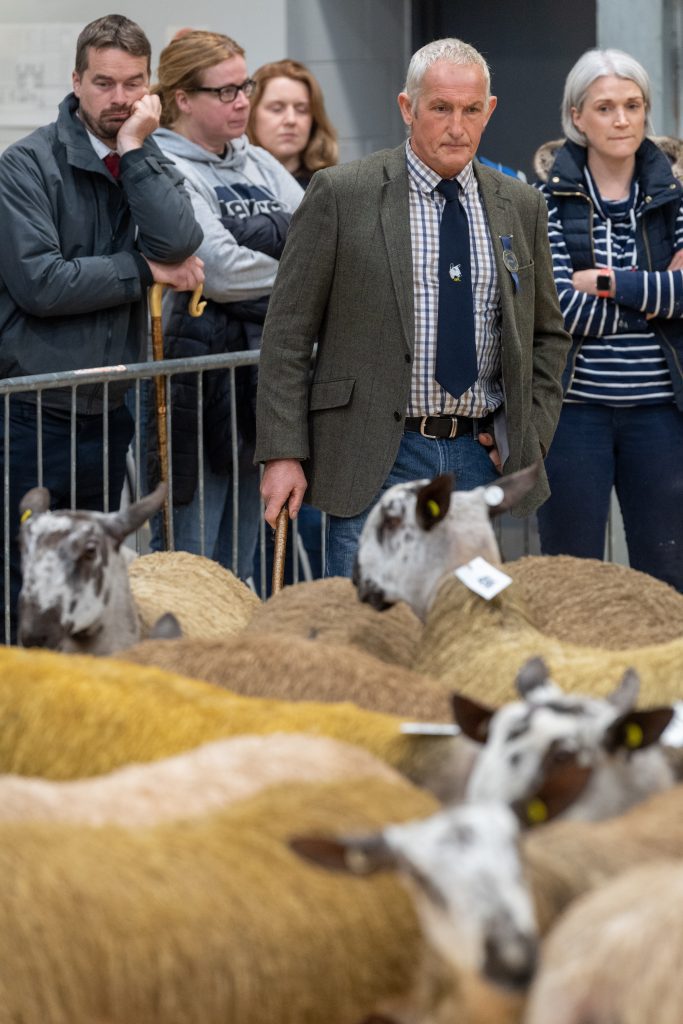 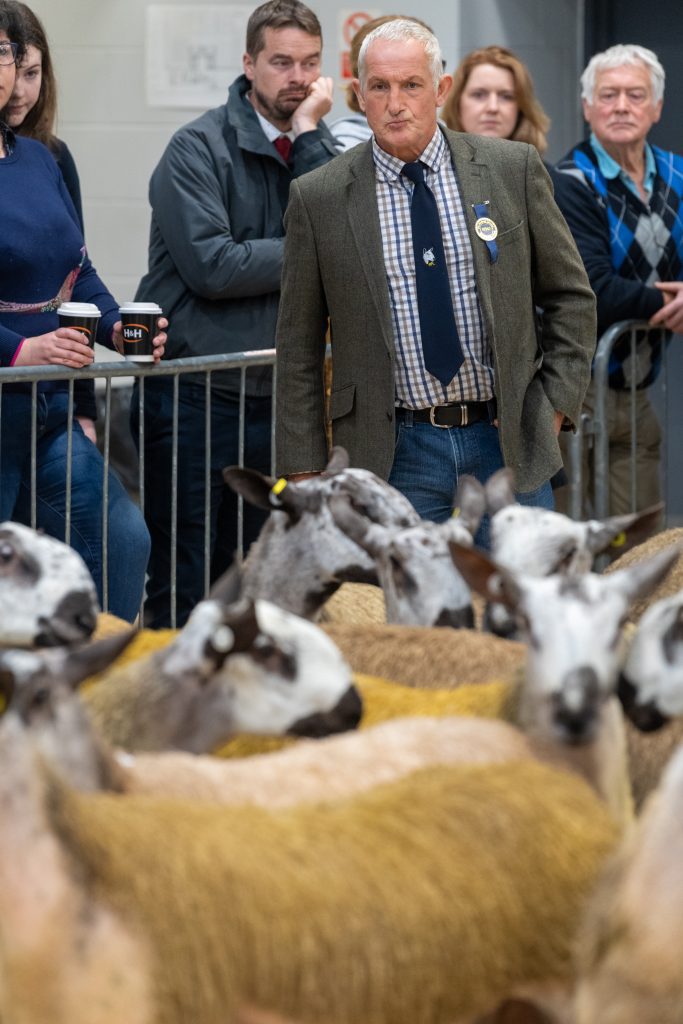 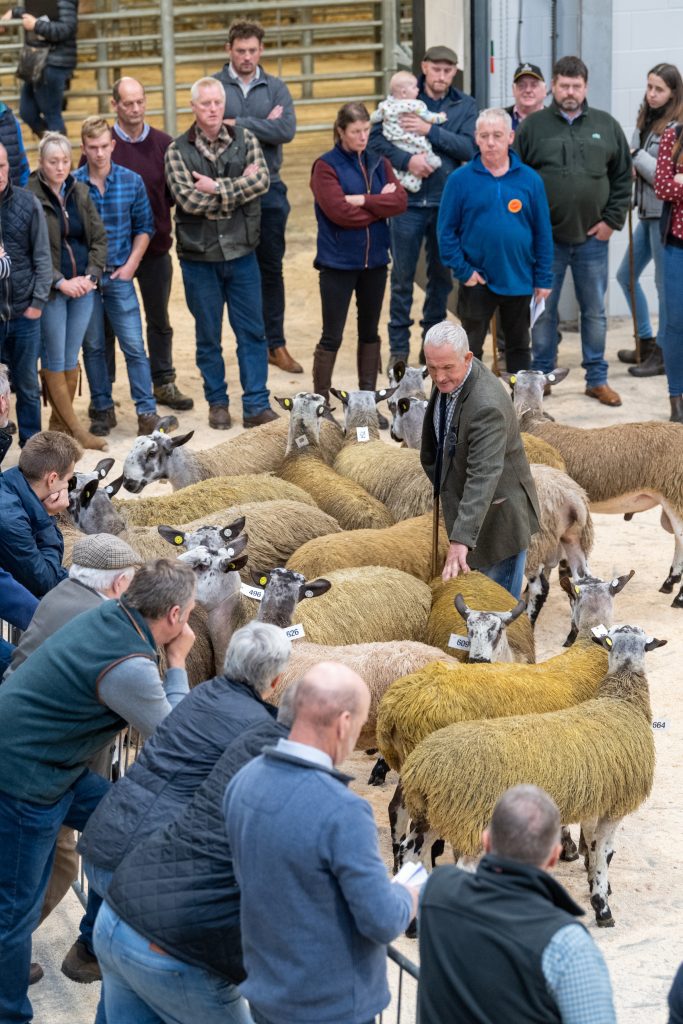 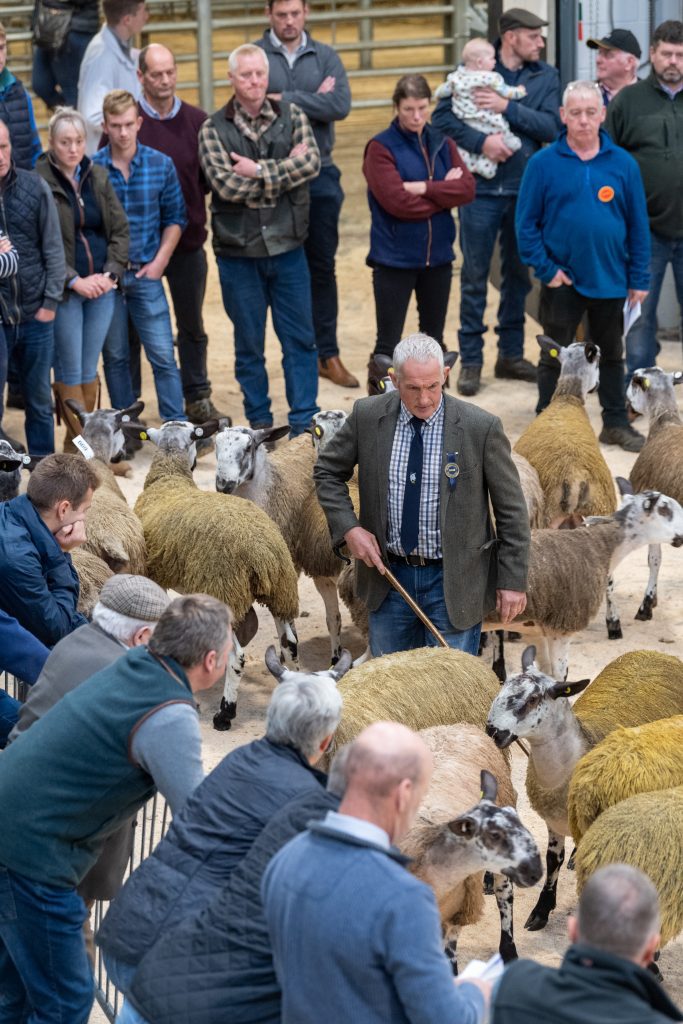 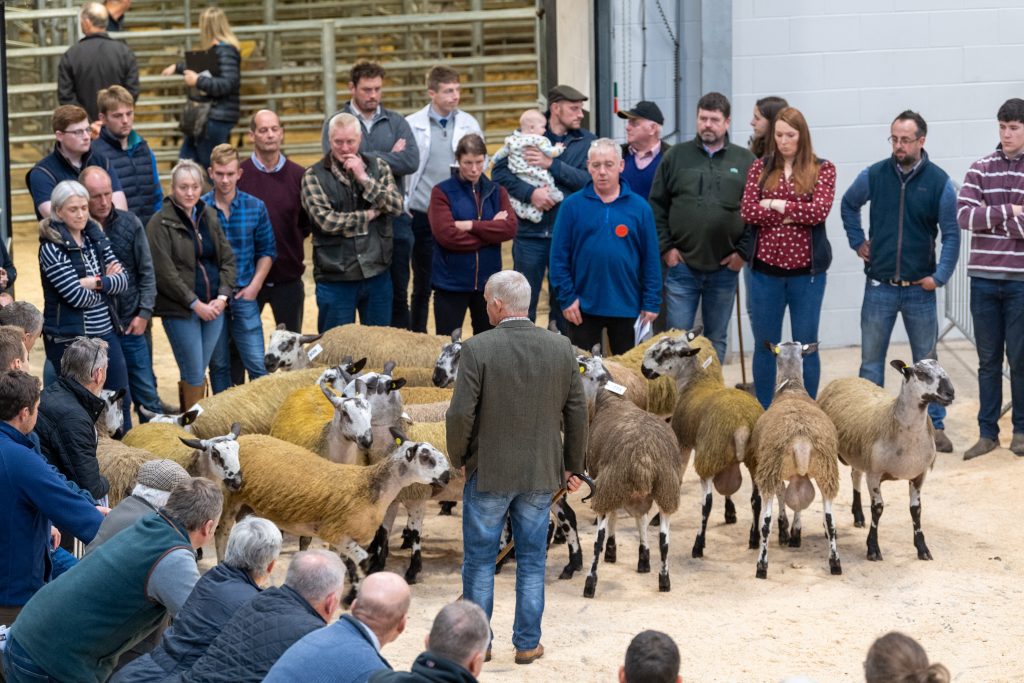 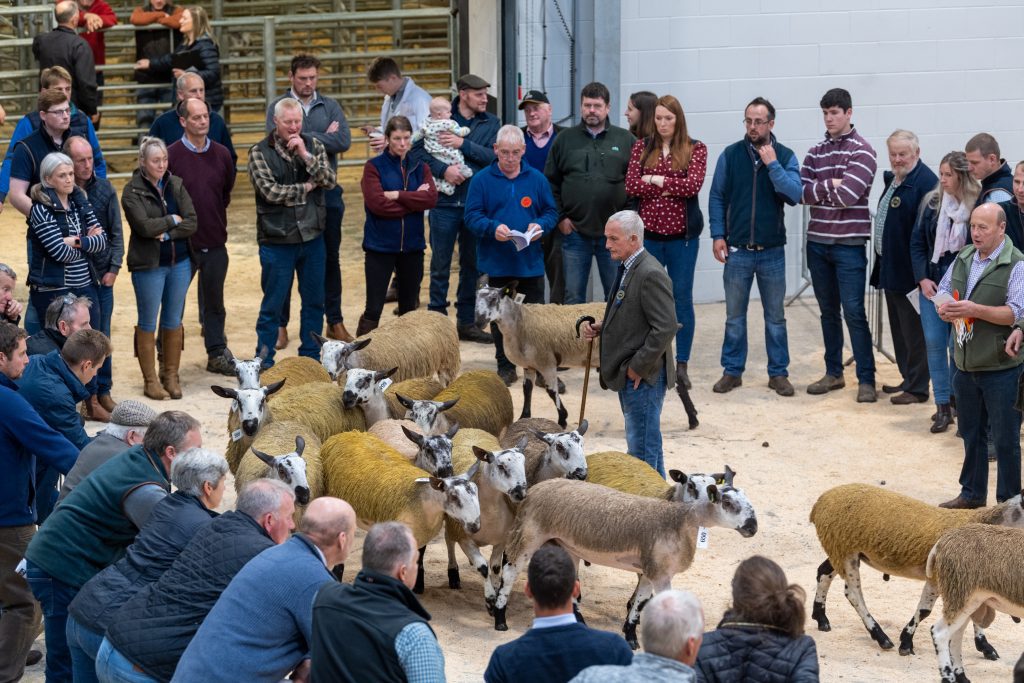 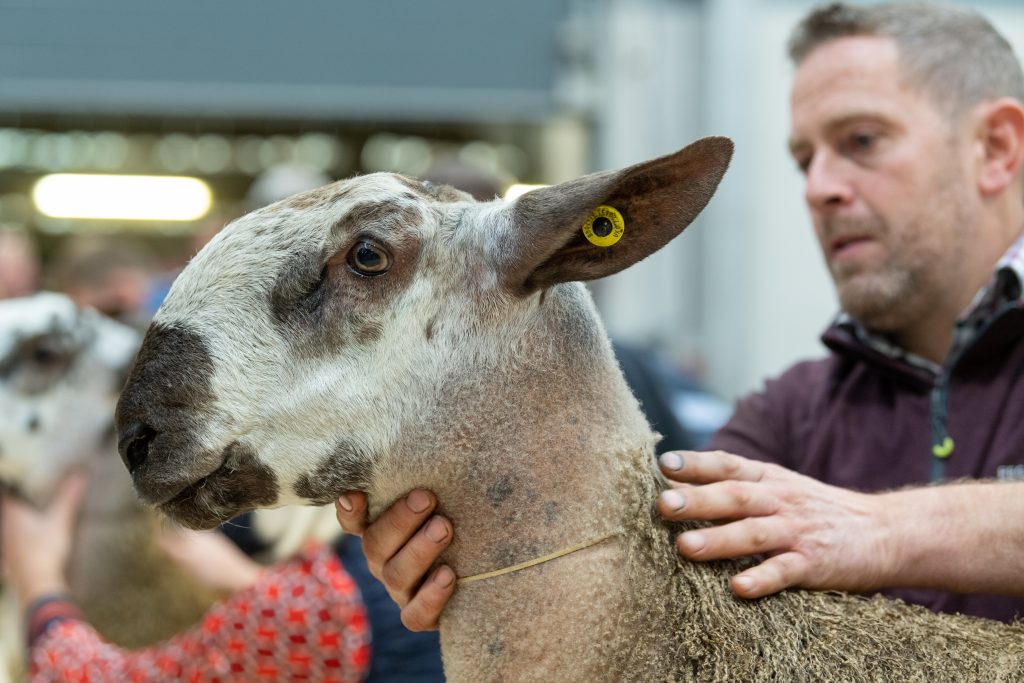 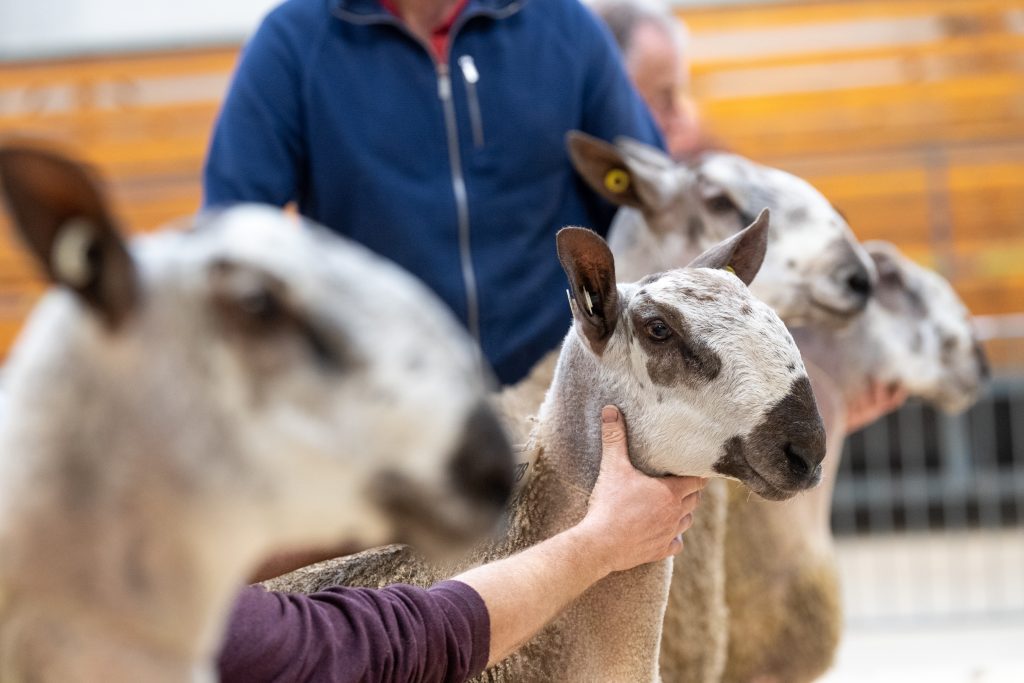