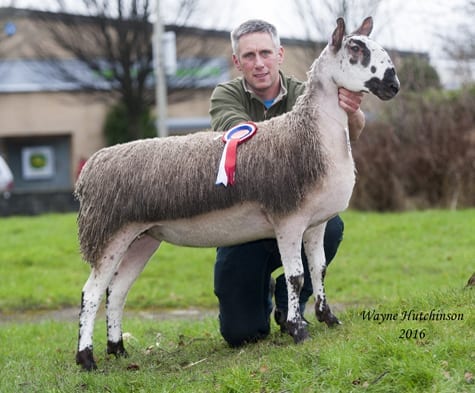 A bumper catalogue of sheep drew a packed ringside at what is becoming the place to sell female Bluefaced Leicesters. Buyers from all over the country descended on to the mart and there was standing room only around the ring from the first lot to the last. With a total of 274 sheep entered, many people wondered if a glut of entries might result in a steady trade, but their fears were soon washed away as the bidding flowed freely, making easy work for the auctioneering team at Borderway.

Topping the day’s trade was a cracking gimmer hogg from the Kirkby Redgate flock. It is an embryo lamb by the £6500 G1 Hewgill, which has done well in the flock siring the champion Mules, and out of the flock’s top breeding ewe by D17 Hewgill. She caught the eye of the judge, Matthew Emmott, early in the day with her style and power, and he placed her as the Overall Champion. Plenty of others agreed with his judgement and the bidding was very strong, with the hammer dropping at a new breed record for a female of 11,000 gns, selling to C Davies, Redditch of Brood Ltd, who are putting together a real mouth-watering flock of top bloodlines. Redgate also saw another ewe lamb out of the same ewe by D17, but by the G17 Marriforth, the same way bred as the record breaker they sold for £34,000 last autumn. This sold for 4200 gns to Martyn Archer from the Carry House flock, Northumberland. Martyn also dipped into his pocket later, shelling out 2800 gns for the pen leader from the Smearsett flock which is the full sister to the £12,000 tup they sold to Marriforth. The Redgate pen averaged well, finishing at £3433 for eight sheep.

Neil Marston from the Highberries flock enjoyed a good day at the office as he sold several in lamb sheep. The Highberries prefix has been symnomonus with top quality breeding for a while now and interest in the pen was high. His pen topper, a ewe, is the full sister to the flock’s stock ram, C18 Highberries, out of a ewe by the legendry Y1 Midlock which Neil took to M/s Ellis of the Ilkley Moor flock and got her tupped with his homebred Y22 and carrying twins to G1 Highberries Highlander. It sold for 4200 gns to M/s Shennan, Girvan. Another ewe he offered was a full sister to F14 Highberries which has sired lambs up to £8000 in the past, and out of the same ewe as his first, by the Y1 Midlock, but by C12 Highberries, one of his best breeding tups, by Z4 Hundith. She is carrying three lambs to the G1 Highlander. David and Val Hill from Whitewalls, Asby were the final bidders, paying 3200 gns for her.

Once again the Hewgill flock were in amongst the money and prizes, taking third and fourth places in the gimmer hogg classes. It was their fourth prize lamb which cashed in the best, selling for 3200 gns. This powerfully made daughter of the homebred G49 Hewgill and out of a ewe by B41 Hewgill sold into Northern Ireland to Lee Beacom, Co. Fermanagh. The third prize from the same pen, again out of a ewe by the B41 Hewgill, but this time sired by the £8000 G23 Marriforth sold for 2000 gns to James Campbell, Milton of Buchannan.

Another familiar name was in amongst the money as Midlock sold their annual consignment, with a top of 3200 gns for a gimmer shearling by the E1 Bull & Cave. She was carrying three lambs to the E1 Hewgill, which has sired some tremendous sheep, including a £12,000 lamb last year. Final bidder for this strong gimmer was D McCrystal, Maghera. The run of gimmers on offer created a great deal of interest with the Midlock bloodlines – some of the most influential in the breed at the moment, and buyers were looking to try and grab some of the breeding on offer, and prices reflected this too. They had two other gimmers hit 3000 gns, the first sold to Messrs Hall, Keilder. G147 Midlock, by F1 Low Tipalt, had been shown successfully as a lamb, and out of one of the flock’s best breeding ewes, carrying twins to G2 Marriforth. The next at 3000 gns was the first prize gimmer shearling, again by the F1 Low Tipalt, and out of a ewe by the W25 Midlock Controversy. She is the full sister to one of the best Mule breeding shearlings sold by Midlock last year and carrying three lambs to a homebred tup, H50 Midlock, a son of E1 Hewgill, which they retained. Forking out the readies was Richard Thomas from the Tanhouse Farmflock, who liked the ewe, but also having seen the tup lamb that she was in lamb to, at Peebles Show, was more than happy to buy into a new bloodline. Midlock enjoyed a bumper trade throughout and averaged £1796 for 19 sheep sold.

The Reserve Champion of the day came from noted Welsh breeder, Mike and Ella James, from the Duhonw flock, based in Builth Wells. This late April born lamb is a real sweet example of the breed, oozing style and quality. She caught the eye of the judge who saw enough in her to make her his own, bidding off strong opposition to take her home for 2700 gns. She is by F1 Parkgatestone and the maternal sister to F1 Duhonw Golden Balls, which is proving a great sire for this flock.

There were a couple of embryos on offer at the sale, a first for the breed. They certainly attracted plenty of attention, and the top price was from the Highberries flock, when he offered a ewe carrying two embryos from his show ewe by D24 Highberries which was never beaten whilst out showing and sired by C24 Highberries, the sire of Highlander. Some strong bidding ensued to get this highly rated pregnancy. Julie Lee, Stockley Burn Farm was the last bidder standing, paying 4000 gns. Another embryo implant on offer also attracted a lot of interest, with a ewe from Smearsett carrying twins by the noted B13 Black Tag, which has done so well for the flock, and out of a ewe by the Z4 Hundith. This was a chance to get some top notch genetics from some of the breed’s most proven breeding. This one sold for 3800 gns selling to Neil Marston, Highberries. 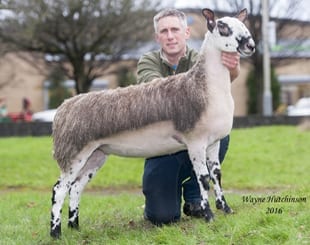 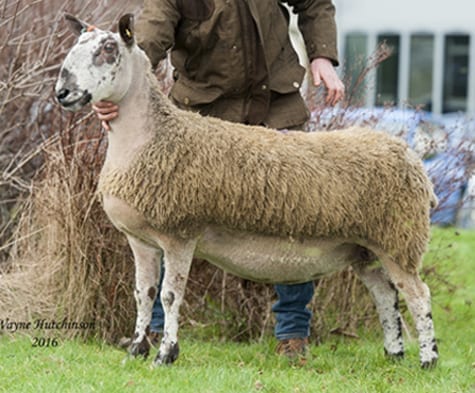 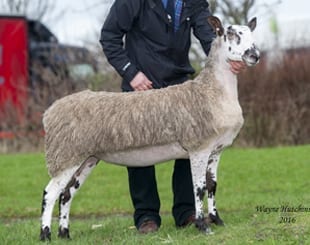 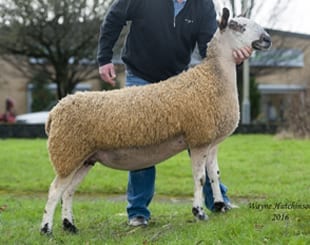 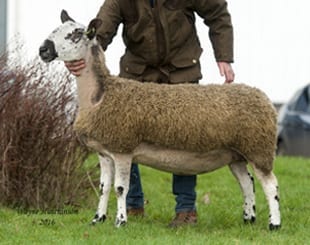 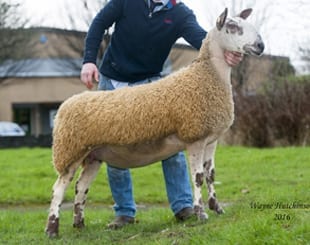 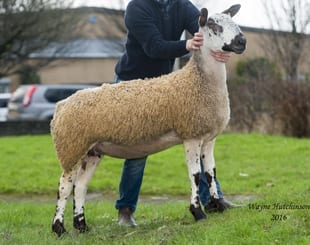 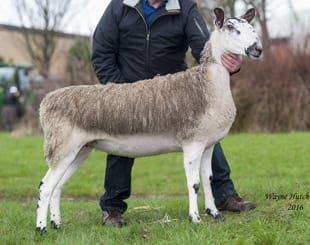