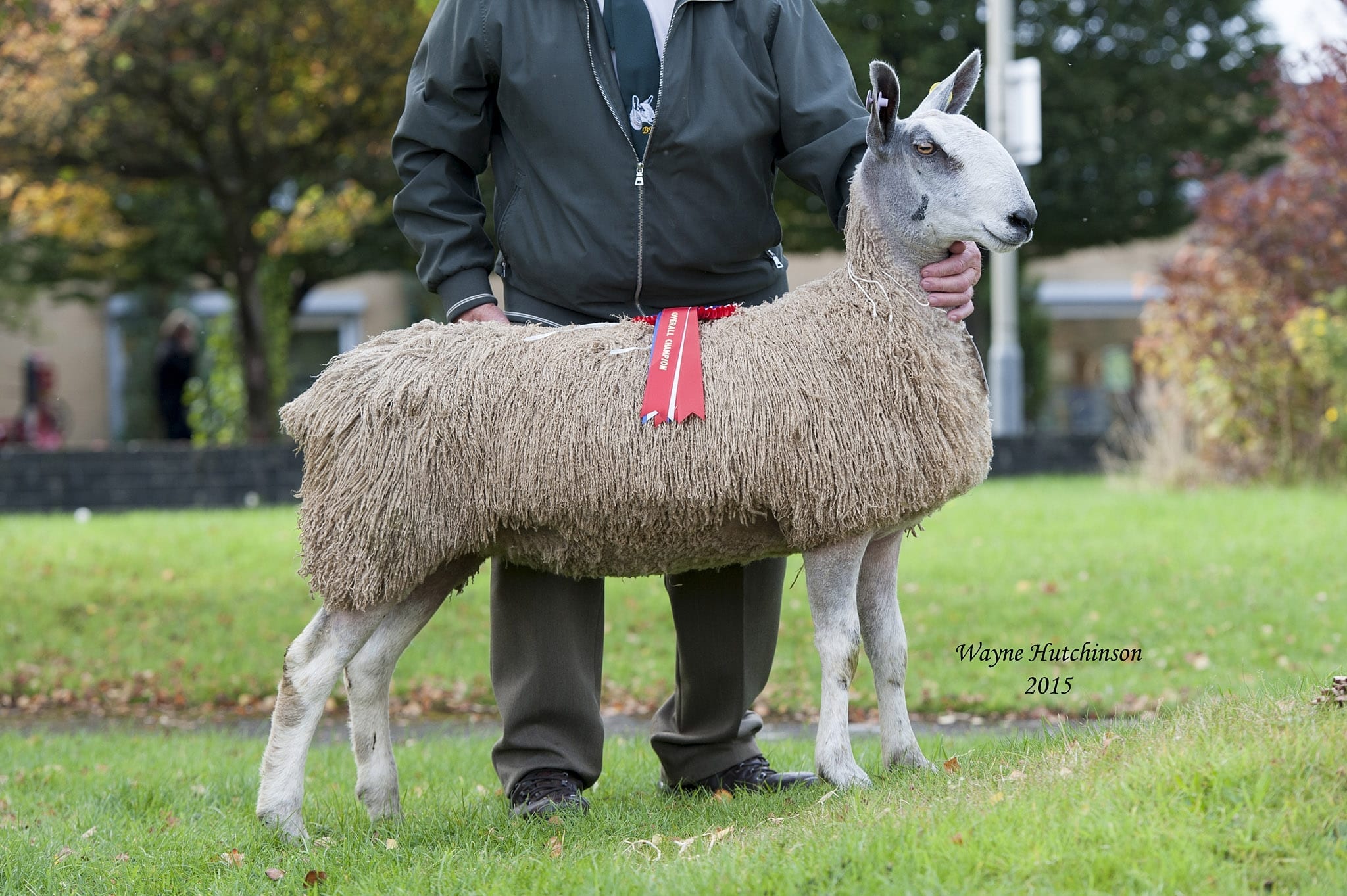 The final big sale of the Bluefaced Leicester season saw a great catalogue of sheep forward, with nearly 1200 entered and it was always going to be a marathon of a sale. The Carlisle sale is a melting pot of the breed, with high flyers from all sides of the breed selling, from the more traditional types to the modern crossing types. With this in mind it was decided to sell ram lambs of both types through their own separate rings, with the aim of making sure the sale didn’t stretch to the epic proportions of Hawes. This proved to be a success, with the final hammer falling around 6.30 pm.

In the traditional ring trading was a little less frantic, but at a good clearance rate non the less. Topping the trade here was the Male Champion, placed by Phil Davies. He was the very last consignment into the traditional ring, making it a long wait for Scott Thomason, who runs just 17 pure ewes on a windswept Walney Island, Cumbria. His pen leader H1 Piel View is no stranger to the show ring, having won his class at the Great Yorkshire Show this summer. He is by the homebred F9 Piel View which was the Champion at the Yorkshire Show this year and out of a ewe by T3 Barlaes. He has bundles of style, combined with a great skin and quality head, and was always an eye catcher. He certainly caught the eye of G & B Ingram, Logie Durno, who started the bidding at £2000 and after a stunned silence it looked like he might land him for the opening bid, but he slowly climbed to fetched £2600. The Piel View flock enjoyed a good trade and saw their first lamb make £2200. This one had stood second at the Great Yorkshire Show and is by F9 Myfyrian and out of a ewe by the old Z1 Hazelwood. He was bought by J Dykes from the Mendick flock, West Linton.

Aled Jones from North Wales has enjoyed a nice year with his Craig Yr Orsedd flock, taking the 3rd prize in the open class with H10 Craig Yr Orsedd, which went on to sell for £2400. He is the full brother to his £7000 tup sold to Myfyrian a couple of years ago by B1 Arkleby and out of the same ewe which bred the £2000 Auchry tup, a 9 year old by T29 Scrainwood which has done remarkably well for the flock. This lamb was sold to M Quinn of the Whinnyhall flock. Aled also took the Reserve Male Champion ticket with his first prize recorded lamb, a triplet by a homebred tup and out of a ewe by B9 Teviot, which bred last year’s show lamb. It sold for £1600 to A Lyttle, Co. Fermanagh.

The Woodcroft flock enjoyed a canny trade, topping at £1900 for a son of F10 Derwenlas and out of a ewe by D1 Cernyw, selling to R Purvis, Halterburn, of the Yeavering flock. They had two more tups break into four figures.

The overall champion in the traditional section went to a smart gimmer lamb from Chris Armstrong of the Broomhills flock. She is by the E1 Cefn Parc tup which has done well for him and is out of a ewe by A1 Street. She sold for £1000 to A Morton, Bank Hall, Kirkland near Penrith.