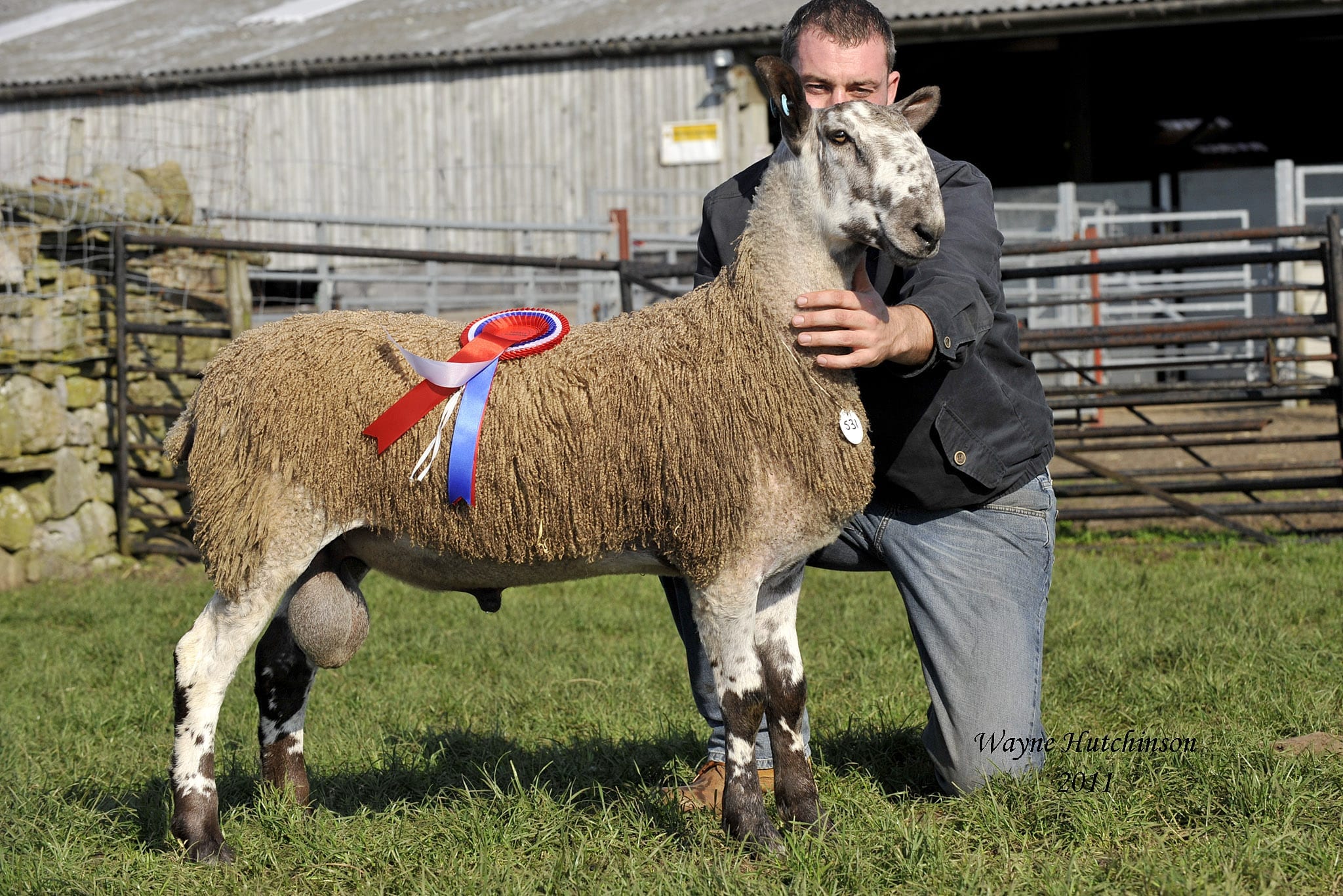 It wasn’t just the temperature which was red hot at Hawes on a beautiful late September’s day, as the annual pilgrimage to the premier sale of Bluefaced Leicester crossing sheep. Averages rose in the tup lamb section by some £43 on the year and a massive £447 in the aged tup section, whilst the shearlings saw a drop of £221. The ring was packed from the 9am start right up until the last ram lamb went through the ring at 12.30 am the following morning, in what must surely be the longest single day sale of sheep in the country.

The days judges, Seamus O’Kane and Stewart Park, were vindicated in their choice of champion, as Jack Lawson’s, Hundith, tup lamb swept all before it, and then went on to make the days top price. This cracking lamb, with some of the best crossing bloodlines behind him, is sired by the £9000 Asby Hall and out of a ewe by Y1 Midlock, which is the in vogue bloodline at the moment. Even Jack was silenced as his star lamb climbed rapidly up the price scale, with auctioneer Raymond Lund finally felling the hammer at £16,000, with the tup away to the Bull & Cave flock run by Mark Nelson. The Hundith flock enjoyed a great trade and saw them level out at £3437 for 16 ram lambs sold.

Once again the Midlock pen attracted some serious attention, with buyers keen to get their hands on some great crossing tups which combine power, style and great skins, which have gained a reputation for going away and doing well. The pen leader D41 Midlock, was a much talked about embryo transfer lamb, out of one of the flocks best gimmer hoggs by the noted B4 Tanhouse Farm and by last year’s £9000 C2 Hewgill champion. The lamb was unshown, but certainly didn’t go unnoticed and was knocked down for £14,000 to Granville and Paul Fairburn, Marriforth, with a consortium of  Yorkshire breeders the under bidders. The Midlock pen averaged a massive £4220 for 10 lambs sold, with their next top a £5500 bid for D6 Midlock to John Huddleston, Ravenscar.

With the Mule gimmer lambs being such a red hot trade this back end there was no surprise to see the Hewgill pen full of potential customers. The Lords picked up the champion tickets at Hawes and Penrith earlier in the month and enjoyed an unbelievable trade for their run of lambs. Their pen topper was a very stylish lamb by B41 Hewgill and out of a ewe by Z14 which has been a strong breeder for the Lords. B41 Hewgill is the son of Z40 Hewgill and had six lambs in the champion pen at Hawes and five in the Penrith champion pen, and was bought by George and Josh Shields, Skeughdale, who had a great trade with their Mule gimmers at Hawes, averaging £133 for 300, and reinvested £10,000 of that back into the Hewgill tup. Colin Lowis, Pooley, a regular buyer out of the Hewgill pen took their first lamb in a £5000 deal. This was another son of B41 Hewgill, and helped the Lords to average £3220 for 10 lambs sold.

Capping a great autumn sales season was David Watson, Middleton Hall, who over the last few years have been building up a reputation for some top notch Mule gimmers, and it hasn’t gone under the radar of other breeders, as Ashley Caton, Otterburn Lodge, forked out £9500 for their pen leader, D2 Middleton Hall, a great skinned lamb by the £2100 C2 Bull & Cave lamb they bought last year and out of a ewe by Y15 Hundith.

There were a couple of lambs at £8500 at opposite ends of the sale. Early in was Michael James, Duhonw who had a great trade with his pen of powerful tups. It was his third lamb in which gave Michael and Ella their personal best, after making £3200 and £5500 with his first two lambs. D3 Duhonw is by the A5 Hawkswell E+ that has been doing so well for the flock and out of a ewe by Y4 Tanhouse, which has also bred a gimmer lamb Michael sold for 2700 gns at Carlisle in the spring.  It was a real Celtic sale as the buyers were from north of the border, selling in a four way spilt to Midlock, Nunscleugh, Firth and Hamildean.

The other lamb at £8500 came late in the sale out of the noted Gordon Rosethorne, Lunesdale pen, which has a great following amongst the North of England Mule breeders, with many of the best bloodlines containing Lunesdale genetics along the way. This lamb by B1 Highberries and out of a M1 Star Green, was bought in a two way spilt between Phillip Dawson, Kentmere and Neil Marston, who had a really good trade earlier in the back end with Mules and Leicester’s at Cockermouth and reinvested some of this into some of the Lunesdale bloodlines.

In the aged tups and shearling section it was an old tup from the W A & A Booth which was making the headlines, selling to the Kirkby Redgate flock for £8000.  This homebred tup, A6 Smearsett, has been a good consistent breeder in the flock, getting several lambs in the top pen of Mule gimmers each year, is by the £17,000 W2 Lunesdale out of a good breeding ewe by M1 Star Green, which also bred the female champion of the day, selling to James Porter, Riddings, for £2500. The Booths also had a good sale with their lambs too, taking the day’s top average of £4250 for six, with a top of £8000 selling ro R Hargreraves, Barley.

Demand for the best tups and bloodlines was in evidence all day, as buyers demanded top quality conformation and good skins. Sheep with plenty of power were making the top prices, and with the demand for the Mule gimmers, there seems no stopping the surge in the popularity of the Bluefaced Leicester.