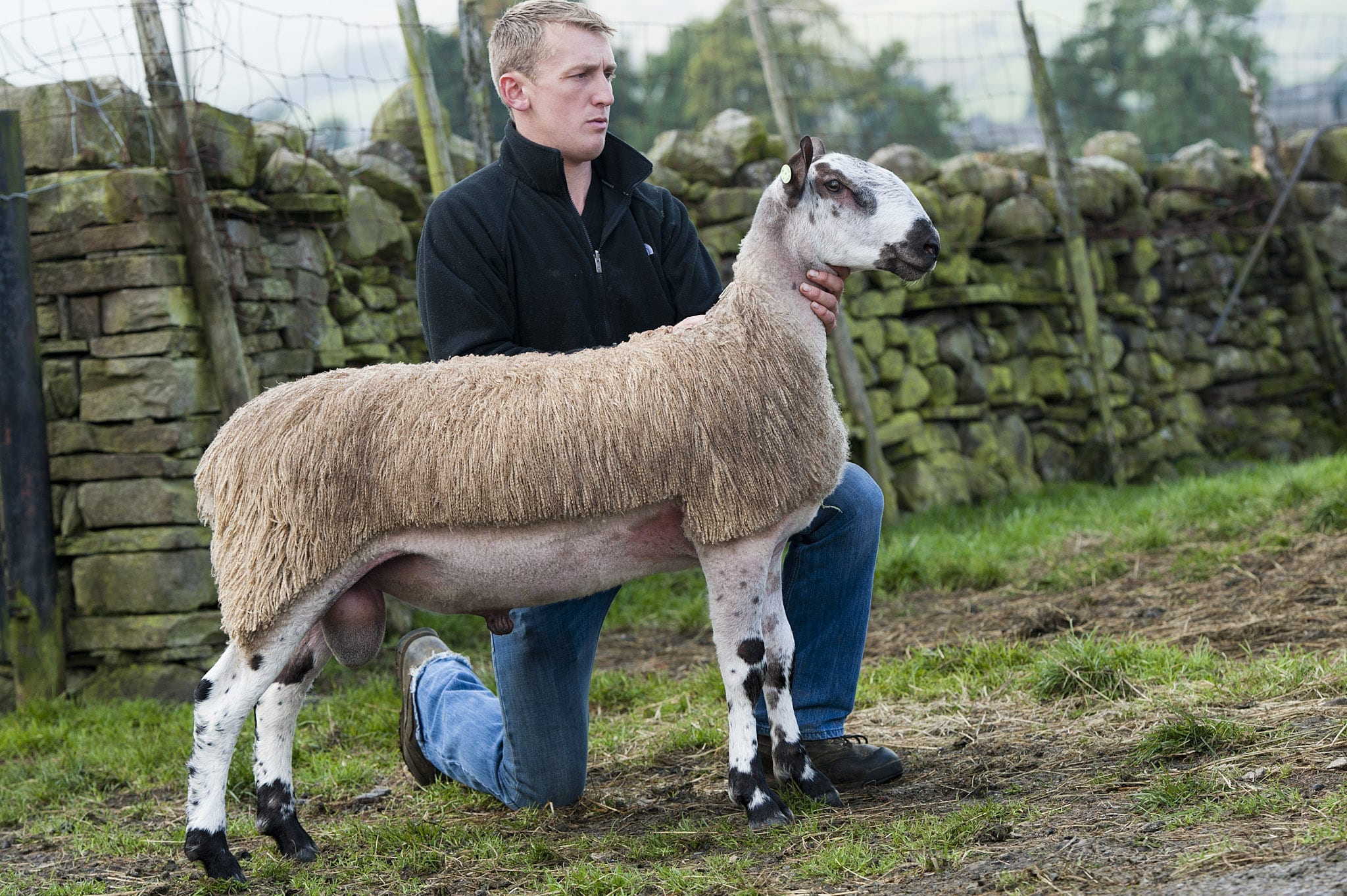 Once again Hawes proved to be the place to be if you were anyway involved in crossing sheep. Buyers joined sellers from all parts of the UK, from Devon to Argyll, to get a piece of the action, in what must be one of the UK livestock sale showpieces. The atmosphere was great all day, with the biggest crowd around the ring for many years, and was full to the very end, 12.30am, with standing room only, and then only with restricted viewing for many, a testament to the popularity of the breed in this corner of the country.

Topping the days trade was F10 Penhill from Tom Willoughby. A cracking tup lamb full of Midlock breeding. He was by the E29 Midlock, the Willoughby’s bought for £5000 last year, and has done particularly well for the flock, taking the breed championship at Reeth Show and also siring the champion Mule lamb there too, and out of a ewe that they had bought from Midlock by Z35 Midlock. With all this Midlock breeding behind him, it was perhaps no surprise to see plenty of Scottish interest in him, and it was a brace of Scottish consortiums battling it out for his services, with Messrs Minto, Thornborrow and Wallace the final bidders, forking out £16,000 between them. A stunned Tom also saw his fourth lamb in the ring, also sired by the E29 Midlock, race away and prove popular with the punters, with the hammer just dropping shy of five figures at £9500, selling to Northumberland breeders, J Browell, Quarry House, completing a fantastic day for the Penhill flock.

The trade built up all day and it was some of the later lots into the ring which saw the bids flowing fastest. David Abberley from the Old Hemley flock may have been concerned when he saw the ballot, only 40 lots from the end of the 16 hour sale, wouldn’t normally be considered the best of places, but it didn’t hurt his trade, taking the days second top price for F1 Old Hemley. Stewart Park and Eunice Mills from the SP Dalpeddar flock had waited patiently all day for their number one target, which they have renamed “The Tank” due to his immense size and power. He is by the £10,000 C2 Tanhouse Farm, and out of the sister to A5 Old Hemley, which has proved to be a good breeding line within the flock, going back to the Y1 Midlock. Stewart had to fend off some serious bidding to land this unshown lamb, and had to write a cheque for £15,000 to acquire him.

Earlier in the day Jimmy Bell from the Cottage flock, Crawford, Biggar, set tongues wagging with his pen of lambs. Strong, stylish modern lambs, these were very much in demand. His second lamb into the ring, F19 Cottage, was the headline act, selling for £14,000 to Paul and Granville Fairburn, Marriforth. He is an embryo son of the £12,500 E4 Hewgill bought last year, out of the full sister to a gimmer lamb Jimmy sold at the Highland Show in 2012 for £5500 which was by Z1 Todhills, which in turn goes back to the £6000 gimmer bought from Neil Marston of the Highberries flock, with the Z4 Hundith influence still proving hard to get past in the ring. Strong trade for the other lambs from the Cottage flock, including a £4600 bid for the full brother to F19 which headed to Peter Heard in Devon, saw Jimmy conclude his autumn trade in great form, averaging £3762 for eight lambs. No doubt he will raise a can of Magners at that!

It was a real case of “Back to the Future” for the Keer flock as they saw an embryo son of the home bred J7 Keer, a star performer for the flock some two decades ago. They decided to reintroduce some “fresh” breeding via an ET, flushing a ewe they had sourced from Midlock by the B4 Tanhouse Farm, combining the best of old and modern bloodlines. They have retained a full brother for their own use, and saw the bidding for this exclusive bloodline stack up in the ring, with the hammer dropping at £12,000, the highest price for the flock yet. The buyer was Peter Lee from Morley Hill, Weardale, who was a great fan of the J7 breeding all those moons ago, and couldn’t resist going back for more!

There were a brace of lambs hitting £11,000, the first early in the sale from Ron and Fran Wilson, Low Tipalt, with their first lamb, F1 Low Tipalt. This much admired lamb has been one of the stars on this summers show circuit, being shown four times and winning on each occasion. It is out of a ewe by X2 Midlock that Fran bought off Ashley Caton and by D15 Smearsett, which is proving his worth in the Smearsett flock. It went north of the border, as many of the top lots did, selling to the Midlock and Firth flocks.

Firth had the other lamb hitting the £11,000 mark, as their number one lamb caught the eye. It was by the £11,000 Hewgill E1 bought last year and out of a ewe by W25 Midlock Controversy, which is one of the best crossing lines on the farm. It was bought by Jamie Pirie, Stirling, who is a fan of the Firth bloodlines, having bought from them before, but as they say, if it works, don’t mend it, with Jamie’s flock doing well at the Castle Douglas sales over the last couple of years. This was his most expensive purchase, and the Hall’s top sale to date too. This sale helped the Firth flock to the leading average on the day, of £5120 for five tups sold.

Creeping into the five figure bracket was a personal best from Paul Brown, Ravenstonedale. His number one lamb, F1 Oak House, a son of the D17 Hewgill bought last year and out of a ewe by the noted W1 Keer sold in a three way split to Neil Marston, Highberries, Ron and Fran Wilson, Low Tipalt and Martyn Archer, Carry House for £10,200.

Hewgill always enjoy a cracking trade on the back of the success of their Mule gimmer lambs, which this year topped at £620 with the champion pen at Hawes. Their topper was F1 Hewgill, which sold to a returning customer Colin Lowis, Pooley Bride in a £10,000 deal. The last to hit the magical five figure mark was a strong lamb from Geoff Taylor, Swathburn, by the C2 Hundith and out of a ewe by T6 Keer.

Shearlings topped at £8000 for E38 “Batman” from Messrs Fairburn, Marriforth. This powerful shearling has proved himself, siring three lambs in the Marriforth top pen, and won the progeny title at Skipton. He sold to Andrew Cambell, Drimsynie.

Other notable prices included a bid of £7000 for the Reserve Champion of the day, a clean modern type from Kirkby Redgate. This son of C49 Hewgill, champion at Penrith last year sold to Todhills. The Champion of the day came from Martin Allan, Greenhow, who had a long wait after showing before going through the ring. His lamb sold to Ashley Caton for £6500, by the C2 Hundith, the same breeding as the Swathburn tup sold earlier in the day.

On the whole trade was strong, with forty more tups sold than last year, but with breeders being selective about how much they paid, the auctioneers had to work hard for their commission, and this saw the average drop £232 on the year.