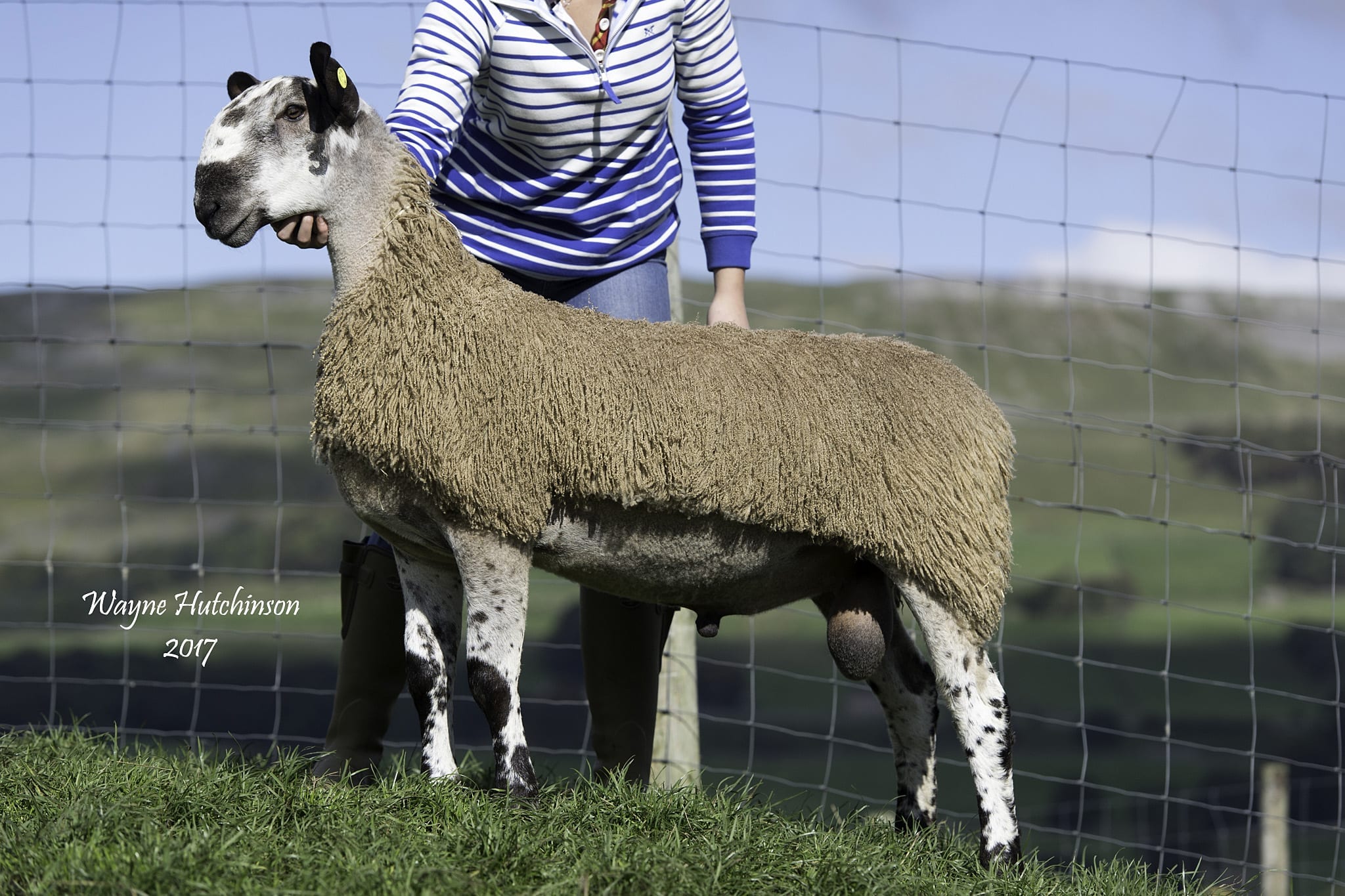 Another year, another crazy day at the annual Hawes Bluefaced Leicester jamboree, where bids flow and wallets empty in the blink of Raymond Lund’s eye. Fortunes are made or lost on the strength of a pen of Mule gimmers. This year’s marathon was a gruelling 16 hours long, starting at 9 am and the last tup went through the ring at 1.15 am, with a bleary crowd witnessing the last consignment taking the sale’s top average, so safe to say the trade held up to the end!

Topping the day’s trade was a familiar name, with Allan Wight and his Midlock team smashing the breed record with a powerful tup lamb out of the flock’s top ewe. He was by J6 Hewgill bought out of Hawes last year for £5500 and out of a ewe by the B4 Tanhouse Farm which had already bred over £40,000 worth of tups. Raymond Lund was holding the gavel when the Midlock consignment came in and he oversaw proceedings like the auctioneering maestro he is, making the audience part of the game, drawing out laughs and bids in equal measure. He drew the bids expertly…. even when there were shaking heads in the under bidder’s team, from Northern Ireland, for the last few bids. His hammer fell at £37,000 selling to Jamie Pirie, Blarnavaid and Andrew Campbell, Drimsynie. The Midlock pen levelled with an average of £6911 for their nine lambs.

The Midlock pen seemed to set the fireworks off, and a rash of big prices soon followed, as buyers looked for tups to step them up, and when they found them they were certainly having to pay for them. A brace of tups hit £24,000 later on. The first was from the Smearsett flock run by the Booth family, Feizor. This long, stylish lamb stood 4th in the show and drew the crowds into the pen. He is by G11 Smearsett, more affectionately known as Ted, a son of the renowned D17 Smearsett and out of a good old breeding ewe by the S1 Lunesdale, a throwback to the old Mule bloodlines of Gordon Rawsthorne. The bidding was strong and when the hammer fell it went in a three way split, selling to the Asby Hall, Hundith and Westside flocks. All with an outstanding reputation breeding Mules already, but looking to tap into the exceptional bloodlines within this sheep. The Smearsett flocked levelled at £3614 for 14 tups sold.

Late in the evening Harkerside enjoyed a great trade, taking the next £24,000 bid, with their pen leader, K1 Harkerside, a son of G6 Midlock which has done a great job in their flock and also the Shafthill flock too, with whom they share him. It was out of a ewe by B1 Todhills G6 which has produced a great run of Mule lambs, with the Harkerside having eight in their top ten by him as well as producing a string of successful lambs, allowing him to win at the Penrith Progeny show in the past. It was the best trade ever for the flock, run by Fred and Ruth Prescott who overlook Riddings from the opposite side of the valley and have always been inspired by them. They sold him in another three way split selling into Scotland to Jimmy Bell, Stewart Park and John Graham.

Close behind at £23,000 Riddings enjoyed their best ever trade. The Riddings name is legendry within the breed, producing some of the best sheep for many decades and have forged a great reputation over that time. The judge, Neil Marston, Highberries made them the day’s champion, remarkably the only second time within the flocks’ history. The champion wasn’t the one who made the money however. It was their number one lamb, K1 Riddings by the Carry House Jackpot, purchased last year for £14,000, and out of a seven shear ewe by Z1 Riddings, who really caught the eye of the breeders. He had stood 3rd in the pre-sale show. The place was buzzing as he followed the champion who made £5500 and by the same tup into the ring. A rush of bidding saw the hammer fall, with the same buyers taking both tups. The successful team behind this double coup were Martin Allan, Greenhow and Craig Taylor, Swathburn.

Andrew and Caroline Hunter, The Steel, enjoyed a spectacular day at the sale on only their second time selling there. Their tup lamb had enjoyed some pre sale whispers and lived up to its billing when it sold for £20,000. He is by a £4000 Firth and out of a ewe by the £10,000 Midlock shared with Carry House. Both tups have been producing the goods with the Mules with 21 out their champion pen of lambs at Hexham being sired by either one of them. The buyers for this one were very local with Tom Willoughby, Penhill, J Allinson, Sealhouses and Buckles flocks joining forces to land him.

It was one of the longest days ever for Michael James, Duhonw. He must have thought the Leicester Gods were against him when he saw the draw for the sale. Last out of everyone, but he had an ace up his sleeve, in the form of the best tup he has ever bred. No stranger to winning tickets at the show here, on one occasion taking both champion and reserve. He didn’t have any tickets to adorn his tup, just missing out on the cut. He needn’t have worried too much as his turn slowly approached, and at just after 1 am he entered the arena, with his K1 Duhonw, a powerful son of G1 Midlock out of a ewe by E1 Swarthburn. Raymond Lund’s voice just lasted long enough to draw the bids out, starting way down, but finishing at £20,000 for this great tup, selling in a way split to James Herdman, Obie Sharp, P Hedley and C Campbell. Mike ended the sale with the top average for his tups, levelling at £8333 for his three tups. Not too bad a turn for a late ballot really…. but I think he will be happier about next year’s ballot in the middle of the pack.

It may have been Midlock who scaled the heights with the prices, but it was the Hewgill flock which started the ball rolling with the run of five figure prices when they sold their number one lamb for £18,000. This well grown lamb is by the homebred H45 Hewgill, which sired seven out of the 10 top lambs at Hawes as well as lambs in the top pens at Kirkby Stephen and Penrith. Full of homebred bloodlines, H45 is by G49 Hewgill and back to E47 Hewgill. On his mother’s side his mother, by G23 Marriforth, is full sister to H30 Hewgill, sold to Andrew Nicholson and its grandmother is sister to Z14 Hewgill full sister. Bidding was fast and frantic, when the hammer fell it was Keith Ireland, Stackhow, and Andrew Nicholson, Swinside, landing themselves another tup from this noted flock. The Lords also sold to £6400 and £6200 with other sons of H45 Hewgill and left the ring with a cracking average of £5460 for 10 lambs.

It’s been a good couple of years for Martyn Archer at the Hawes sale, and with sons of his champion from last year breeding the champion and 3rd prize winners, it was left to Martyn to split them with a full brother to last year’s winners, as he took second prize and the reserve champion ticket. By the G34 Midlock, a son of Mustang and out of a ewe by Z4 Hundith he bought off Neil Marston, Highberries a few years back, and is proving to be one of the shrewdest investments made. This year’s stonking lamb sold for £12,000 to M/s Macgregor, Park and Brown in a three way split. Martyn’s second lamb, by the G34 Midlock and out of a ewe by Highberries Highlander went on to make £9000 selling to Paul and Granville Fairburn, Marriforth, giving the Carry House flock a very respectable average of £4182 for 11 lambs.

Peter Fell from the Castle Hill flock may not be one of the big names within the breed, but his run of Mule gimmer lambs has not gone unnoticed, with his lambs at J36 auction mart in Kendal averaging £114. He runs 15 ewes on the edge of the Lake District near Ulverston, and his pen leader by H4 Marrifoth, going back to E1 Smearsett certainly caught the eye. Full of good Smearsett breeding, and out of a ewe by A1 Smearsett, he sold for £9000 to M/s Hargreaves, Barley.

Other noticeable prices saw Gordon Rawsthorne sell to £8500 to Paul Hallam, Derbyshire and a bid of £7500 for Jamie Pirie, Blarnavaid making his debut at the sale, selling to Breck House Enterprises.

The trade was certainly electric, and averages rose across the board, with the tup lambs some £125 up on the year, but buyers were choosey, with the best sheep the ones to sell, and with a lot of tups to choose from commercial buyers could buy to a budget. The sale is over now, but the talking isn’t, and it will probably take until next year to recover from it, where it will all begin again!

Many thanks to our sponsors – I’Anson Brothers Ltd & Farmers Guardian Newspapers.