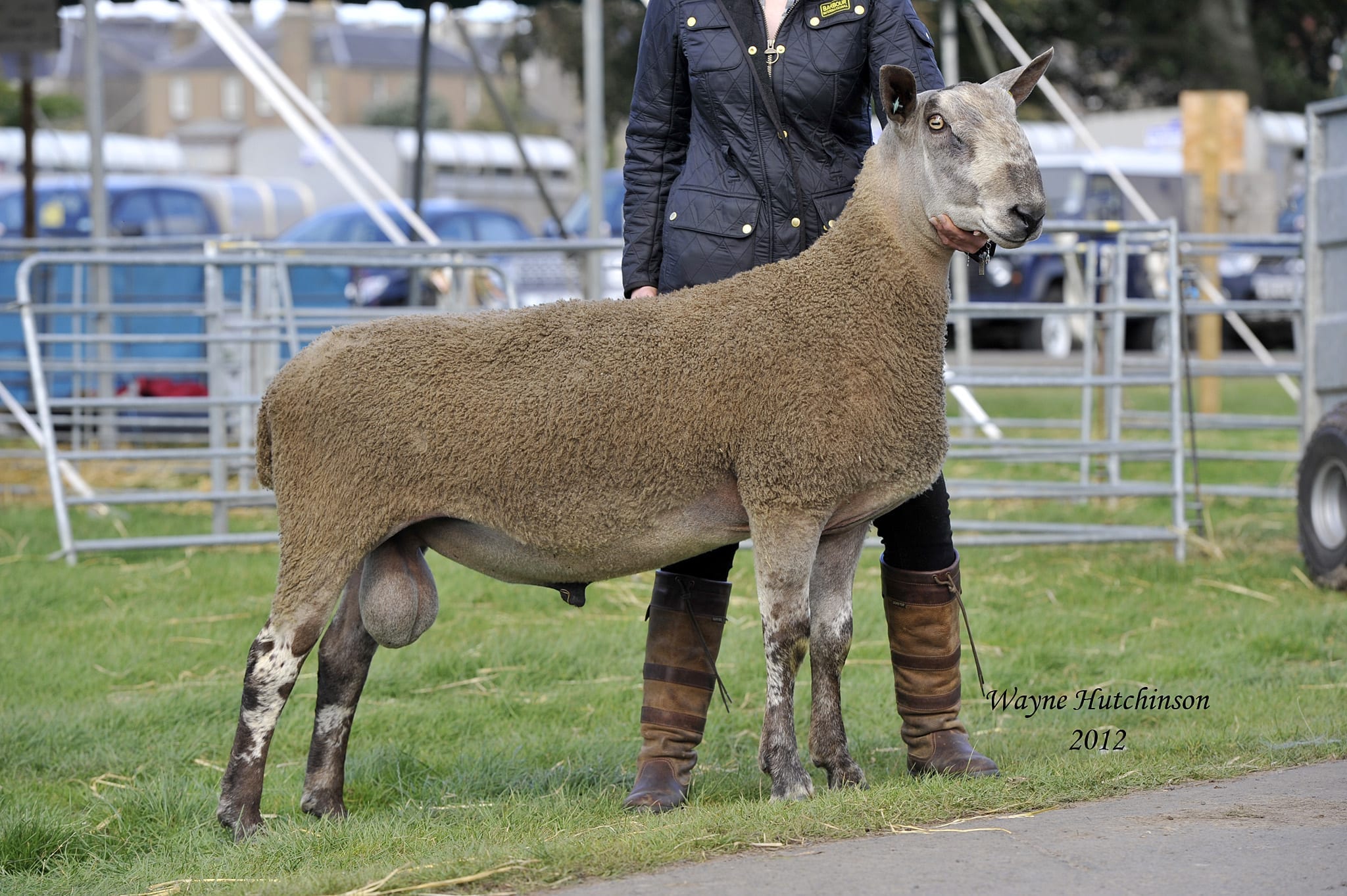 The ram sale season kicked off in fine style once again at the Kelso ram sales, with a strong commercial trade which saw total turnover for the breed just shy of the £500,000 mark for 530 sheep forward, considerably up on the year both in gross turnover and numbers sold. The shearlings levelled out to average £924 and the lambs just over the four figure mark at £1012. Demand was strong all day with the rings doing brisk business to a strong crowd, reflecting the demand once again for the Mule gimmers.

It was fitting that the days top price went to the overall champion, who was placed at the top in the show the night before by Northern Irish judge Seamus O’Kane. The champion was a strong shearling from the Parkgatestone flock of J & J Cunningham. This modern type of sheep was bought by John Park, Dalpeddar, who has had an eye on it for a while. It was last year whilst judging Abington Show that John first set eyes on his new purchase, where he placed him first in the class. Championship tickets run through his veins as he is a son of the £6000 B10 Duhonw which was champion at Hawes a couple of years ago, and he is out of  one of the flocks best breeding ewes by the W12 Ty Mawr. It took a bid of £5000 for John Park to land his pick, but he felt it was good business, especially after seeing lambs by the D2 Parkgatestone in the top pen at St Boswells.

Close on the heels of the top price was a sale of £4600 for the Edlingham flock from James Herdman, who was following in his forebears footsteps, when they sold the top priced tup at Kelso 50 years ago, in the first “Official” Association sale there. James had to settle for second top price this time. The D5 Edlingham shearling had five gimmer lambs in the top pen at Hexham this year, where his progeny caught the eye of his purchasers, Crow Hall and Quarry House. James also pocketed £3000 for another tup, D2 Edlingham, who had also sired five mule gimmers in his top pen which sold for £150. Nilston Rigg were buying him. Both tups were by the £19,000 C2 Midlock which has done exceptionally well for the flock, and his 11 shearlings by him averaged £1921.

Never far away from the top of the tree, and riding on a high after a successful open day it wasn’t too much of a surprise to see the Midlock prefix featuring in the mix, when their much admired pen of strong sheep saw a top bid of £4200 for a son of the B4 Tanhouse. This cocky shearling, full brother to one sold at Hawes last year for £3000, headed south and will be making friends with some Swaledale ewes this backend at the Keer flock in Lancashire run by the Barker family.

One of the stars of the sale was a two shear ram from Jimmy Bell, Cottage. This tup, bred by D Abberley, Old Hemley, has some great breeding behind him, including the Y1 Midlock. Jimmy has had some great use out of him, including lambs in the champion Lanark pen which sold for £138 last year and also doing well at the Penrith Progeny Show. Last year tup lambs at Castle Douglas averaged £1350 by him, with another 7 heading there later this backend. Crow Hall were the eventual buyers when the hammer dropped at £4000.

A whole clutch of rams bordered the £3000 mark, including a strong shearling from Obie Sharp, Newbigging Wells, another son of the £19,000 C2 Midlock, selling to Firth, Dreva and Midlock, buying back in a bit of their breeding. The reserve Champion from A Minto, Townhead, a son of D2 Midlock “Super Ali” sold for £3000, and Dreva had another at the same figure.

Raymond Harding from the Shrewbridge flock in Shropshire had a long trip to the sale, but was delighted with his purchase, D4 Lowes Fell, sold by the Forsters, making their first sale at Kelso. This cocky tups full brother is going to the Hexham sale, hoping to emulate his brothers sale of £2800.

With the demand for the Mule gimmer as strong as ever it is hard not to see a good trade for the best of the tups at this year’s ram sales, and if the demand seen at Kelso continues for big, powerful clean skinned tups, it could well be another record breaking year for the breed.

Obie Sharp, Newbigging Wells, with BFL tup which sold for £3200