Once again there was a tremendous turn out of tups at the NSA Builth Wells sale. A lot of commercial tups were on show, combining power and carcase with some clean skins. All in all a great advert for the breed which is unquestionably the backbone of the British sheep industry.

The trade wasn’t exactly on fire, but was strong enough to keep most sellers and buyers happy. The top price of the day came from Aled Jones from the Craig yr Orsedd flock, which has built up a great reputation over the past few years, and this year he enjoyed a good trade throughout. His sale topper was a smashing tup lamb which had earlier in the year taken 1st prize at the Welsh Progeny Show, and was the full brother to the champion female at the sale. He is by the B1 Arkleby E+ and out of a good ewe by T29 Scrainwood, which is behind many of the good bloodlines for Aled. He sold after some strong bidding to A McClymont, Kirkstead and A Cowans, Philliphaugh, neighbours in the Scottish Borders, for 3000 gns. Aled’s next lamb also attracted a strong trade, fetching 2000 gns. This smart lamb was the same breeding, but out of the ewe which bred his 7000 gns lamb a few years back. Once again it was a Scottish buyer, this time all the way from Turiff, Aberdeenshire to M/s Seed from the Auchry flock. Aled also took 2nd prize in the shearling class which later sold for 1400 gns. This powerful ram had a growth rate of 1/2 kg daily live weight gain over a six week period, giving it an index of 129 in the BFL recording scheme.

It was a 10 hour journey for the Auchry flock, run my Matthew Seed, from north Aberdeenshire, but they enjoyed a good trade on their first visit to Builth. They run 40 Bluefaced Leicester ewes up near Turiff, and saw a bid of 2450 gns for their 3rd prize lamb, G6 Auchry lamb. He is by the D1 Cassington E+ ram which was the champion at Carlisle when they bought him for 3500 gns a few years back and out of a good strong sheep by the Y1 Cernyw E+. He sold to R Lewis for use in his Meudwy flock. In all the Auchry pen averaged £930.

One of the strongest pen of shearlings belonged to Dewi Williams from the Elian flock. He took the Arthur Yeats Memorial Trophy for the best pen of sheep at the sale, and it was a rightly deserved accolade. His run of 60, yes 60, shearlings was tremendous, well turned out and full of power and style. There surely couldn’t have been a better run of sheep at Builth amongst any breed represented there. His top of the run was a massive shearling, F86 Elian, by C1 Wanstead which he bought as an old tup from the Lower Down flock and out of a big strong ewe by B1 Lowes Fell. He sold for 2250 gns to T E & D Jones, Gwnnws. Dewi enjoyed a great trade throughout his run, with buyers looking for strong tups.

The pre sale champion went to noted Anglesey breeder, Myrfyn Roberts, Myfyrian, with a very stylish tup lamb. G1 Myfyrian was first in the recorded class, and with a score of 162Q, he carried some impressive figures to go with the style. He is by the C2 Shrewbridge and his mother is by the homebred C1 Myfyrian. He sold for 2200 gns, as demand for tups with good figures continued to increase as a useful breeding tool. 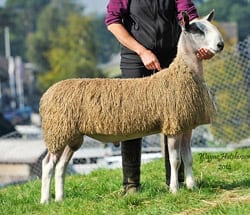 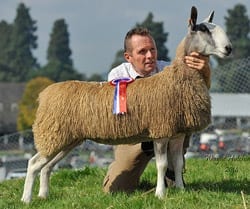 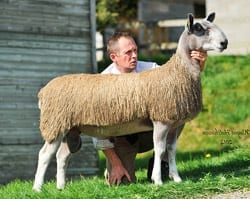 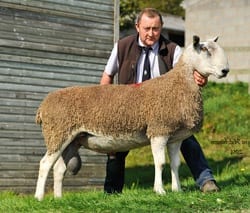 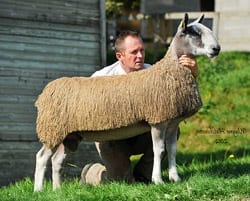 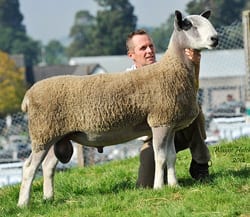 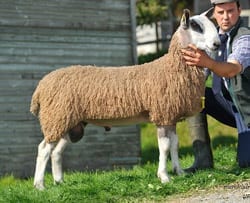 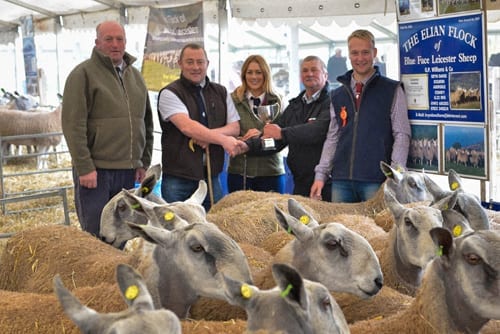