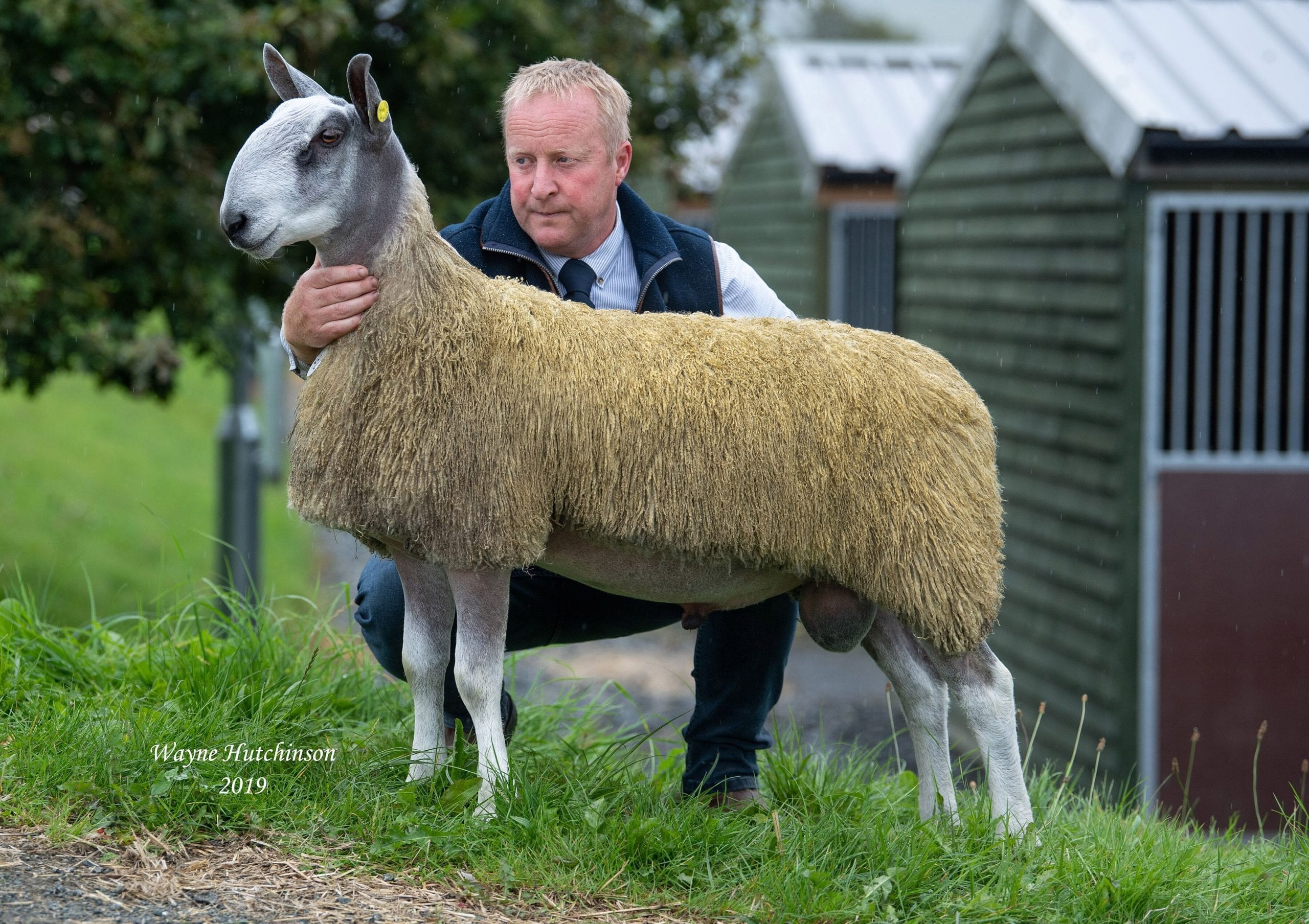 Once again, the NSA sales at Builth Wells was attracting sheep from all over the UK, from the moors of Devon to the Glens of Scotland and all areas in between. Whilst at the start of the sale the ring looked to have less people about, it slowly built up after the Welsh rugby game was completed in Japan…. funny how events in Japan and influence a tup sale in Wales!

Despite worries about the dreaded “B” word, and the headline prices being a lump less than last year, the averages actually rose by nearly £71 for the shearlings to £573.34 for a 97% clearance and while the ram lambs fell slightly by £12 for 97 sold, levelling at £591.14, with a clearance of nearly 75%. The whole sale, all breeds included, saw the average increase by 4.5%, for a clearance of 86%, with flock masters investing in good strong tups, across the board.

Topping the day’s trade was a tup lamb from Frank Johnson, Ashes, with a cracking tup lamb by the K4 Burndale, bought for £1400 out of Carlisle a few years back, and has proved to have been a shrewd buy for the veteran breeder, making his debut at the Builth sale. Two full brothers to this lamb sold at Carlisle last year making £3900 and £3000 gns each. They are out of a ewe by Ashes D9, which he bought at the Shielsknowe dispersal for £500. Tudor Harris, Bonvilston was the buyer of this lamb, bidding all the way from the start to secure his target for 4200 gns.

Another successful debutant was Alan McClymont from the Kirkstead flock, who followed Frank Johnson directly into the ring. The Kirkstead consignment had travelled a good six hours from the Borders, but felt the journey was worthwhile when they initially took the overall championship with Kirkstead M2, a smart, well bred lamb by the G1 Burndale, which has twice won the Highland Show and out of the flock’s show ewe, Kirkstead F22 which has a double championship at the Scottish progeny show. The hammer dropped at 3100 gns for him, selling to M/s Jones, and his full brother sold to 2200 gns, selling in a two-way split to veteran breeder Robin Peart and his protégée, Jack Wilkinson, both based up in Weardale.

Also enjoying a good trade was the Tyhir flock with a young, sharp lamb by the Kirkstead K3, the champion at the Royal Welsh Show for the last two years, out of K33 Lower Down, a ewe bought in lamb by Piel View G7. He sold for 2100 gns, the top price to date for this up and coming flock.

David Henderson is another who has a long journey down, this time just bringing the one entry, North Burndale M1, a son of the L1 Lower Drostre which he bought last year at Builth. This is another son of the Kirkstead K3 and out of a great sheep in David’s flock, having bred his two best gimmers last year, and herself taking a couple of championships as a gimmer shearling. He took 4th in the pre-sale show and sold for 2000 gns to Alan Cowans, just about covering his diesel costs for the trip down!

It was a day that the tup lambs dominated in terms of prices as Scott Thomason sold Piel View M1, which stood first at the Penrith Progeny Show for 1800 gns. This big powerful lamb was by Kirkstead J9, the interbreed champion from Penrith last year, and full brother to the K3 Kirkstead which is doing so well in Wales.

Topping the shearling trade was a monster of a tup from D Williams, Elian, with a son of another Kirkstead, this time K7, which he bought out of Carlisle for £3400 and has done well for the flock. He is out of a homebred ewe by the Addingham “Elite +” B1 and sold for 1500 gns. 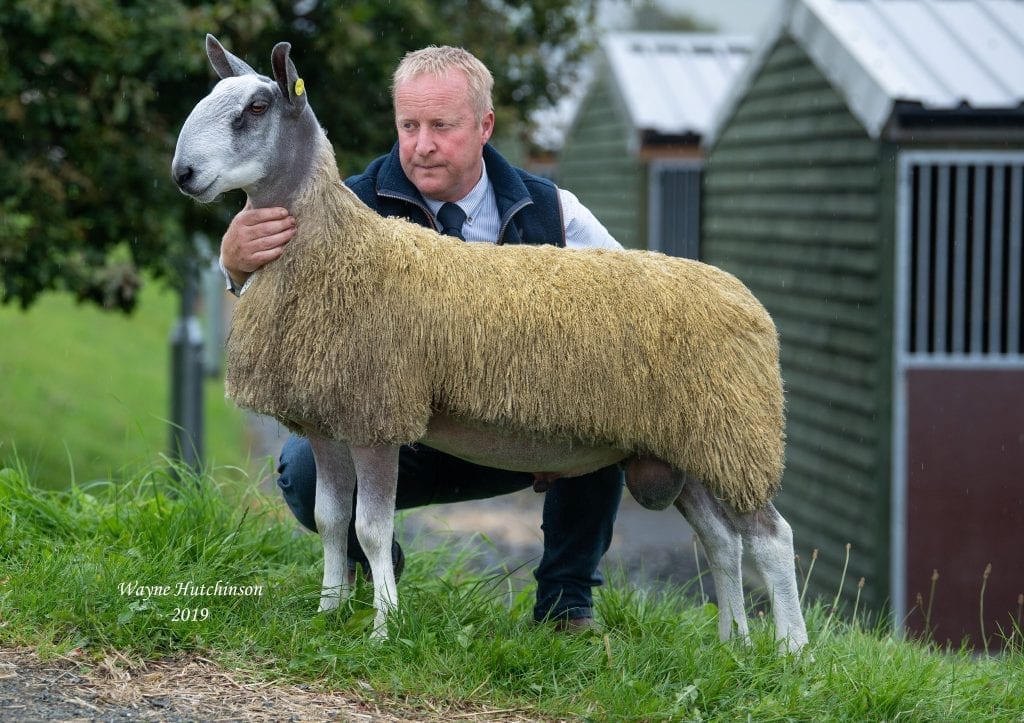 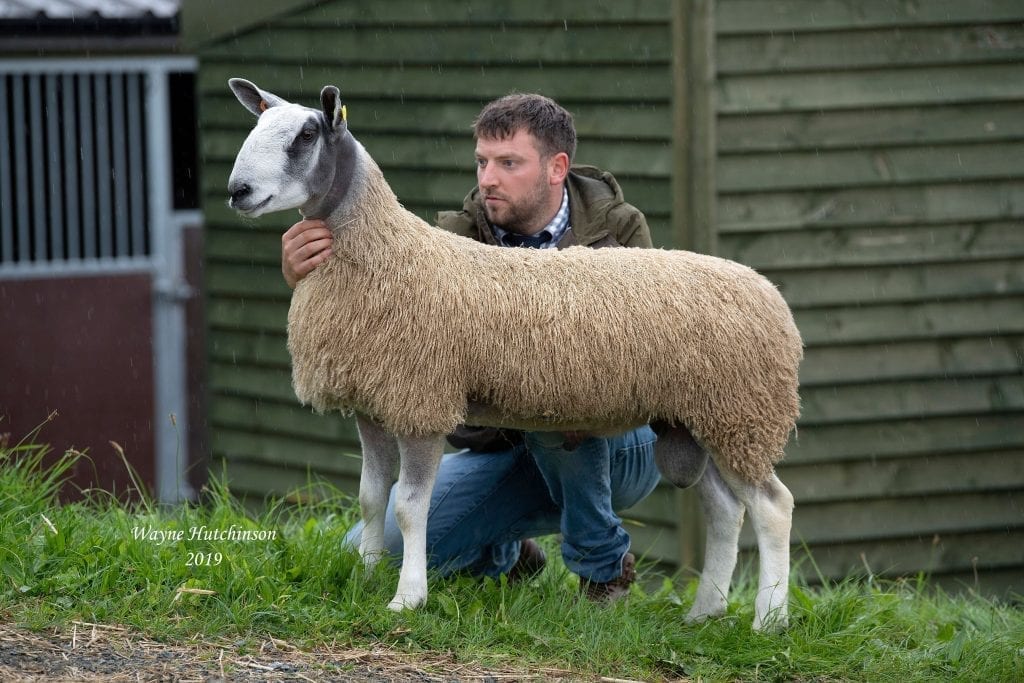 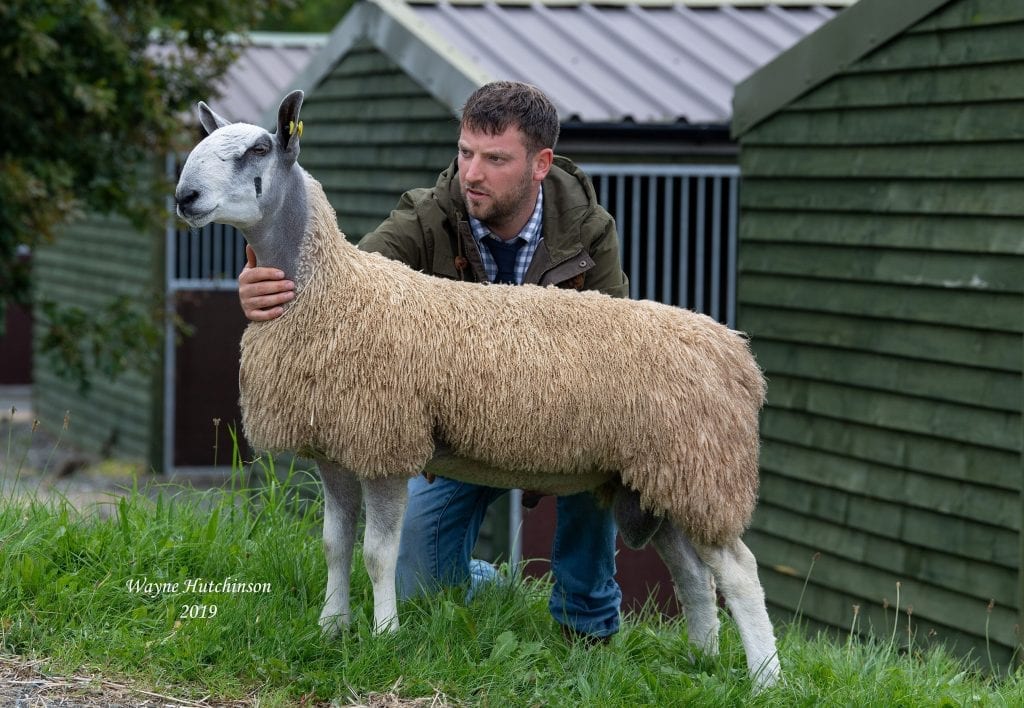 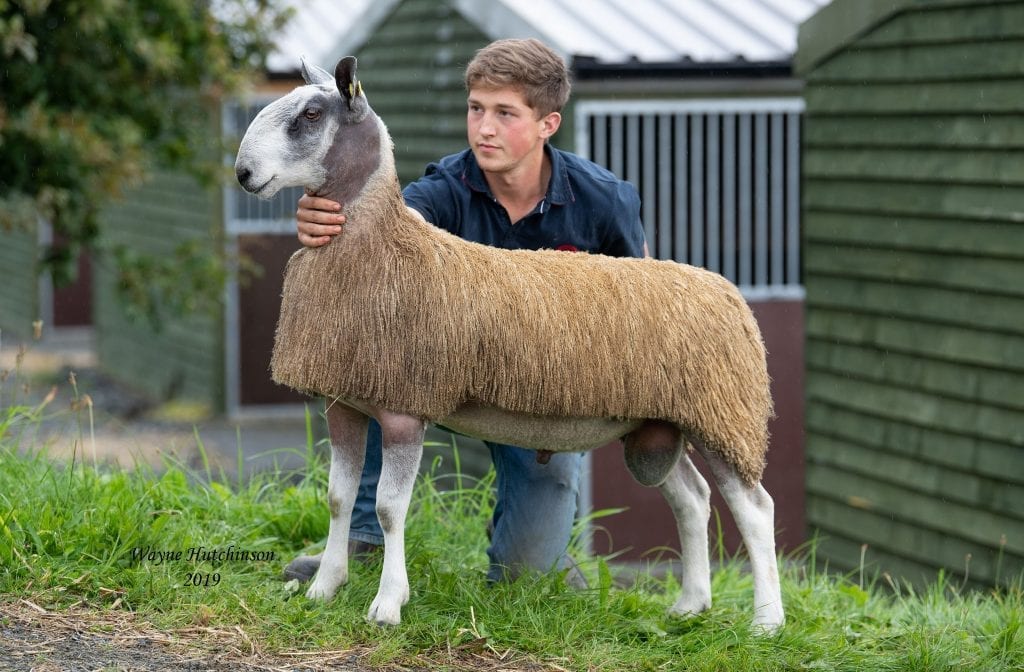 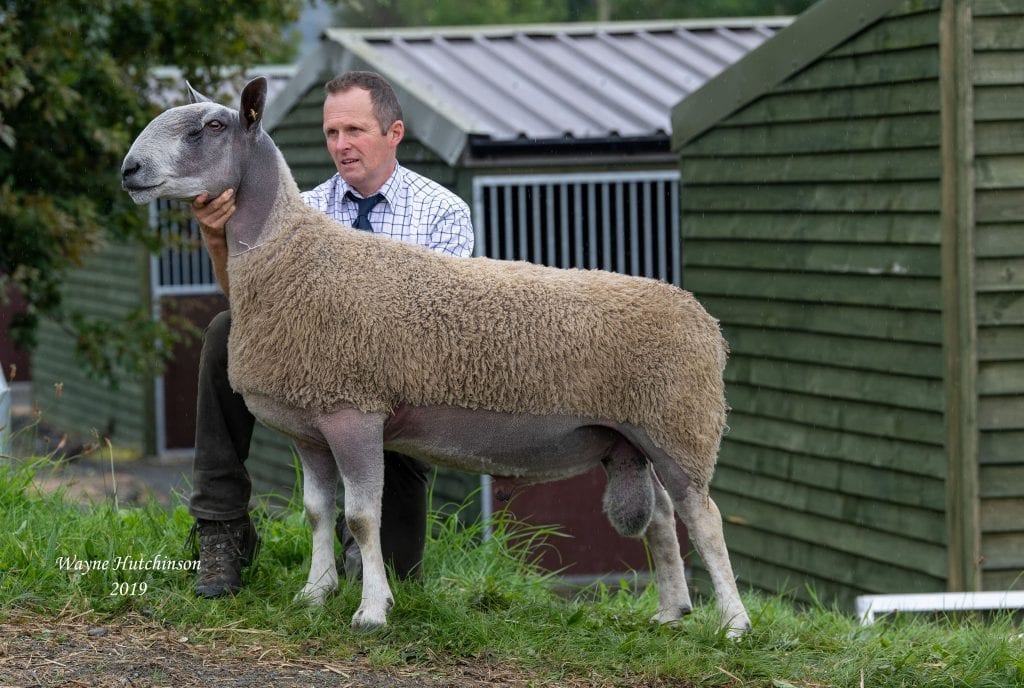 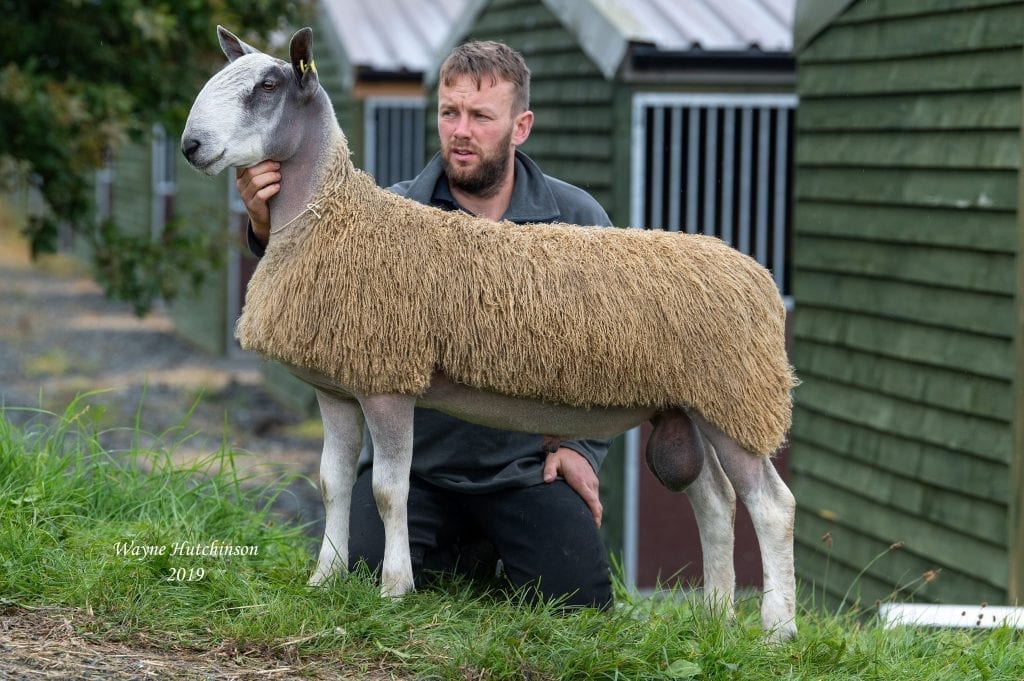 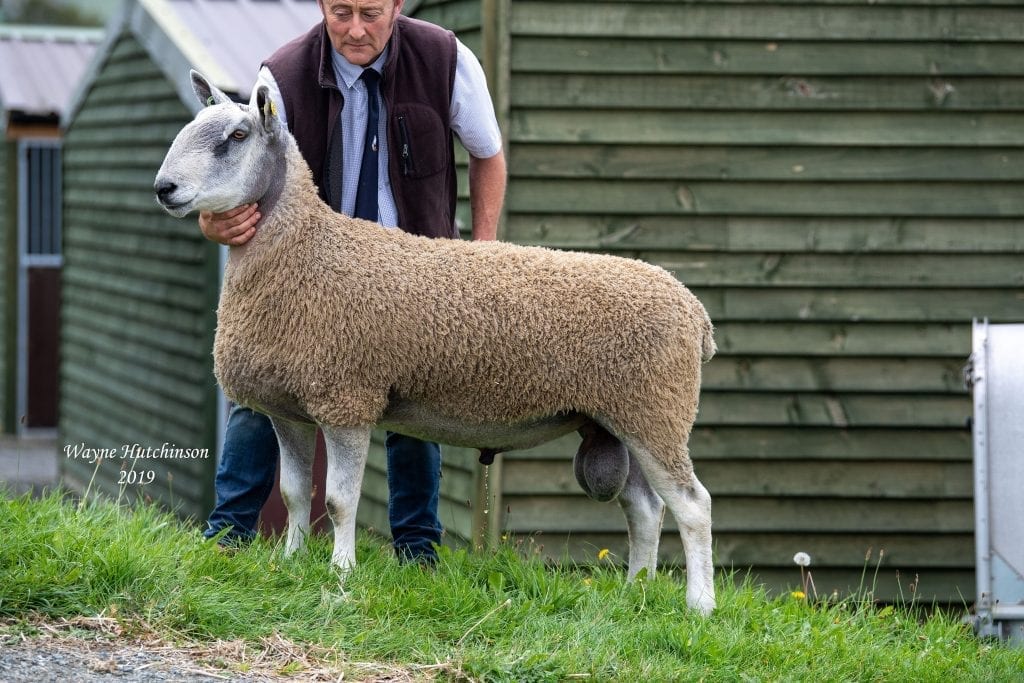 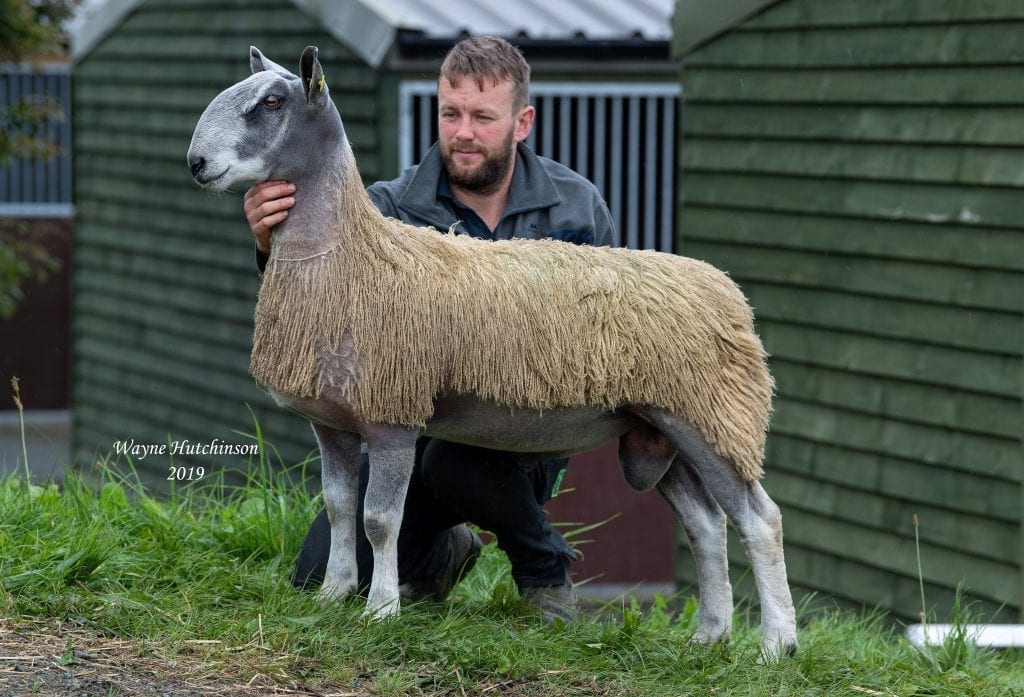 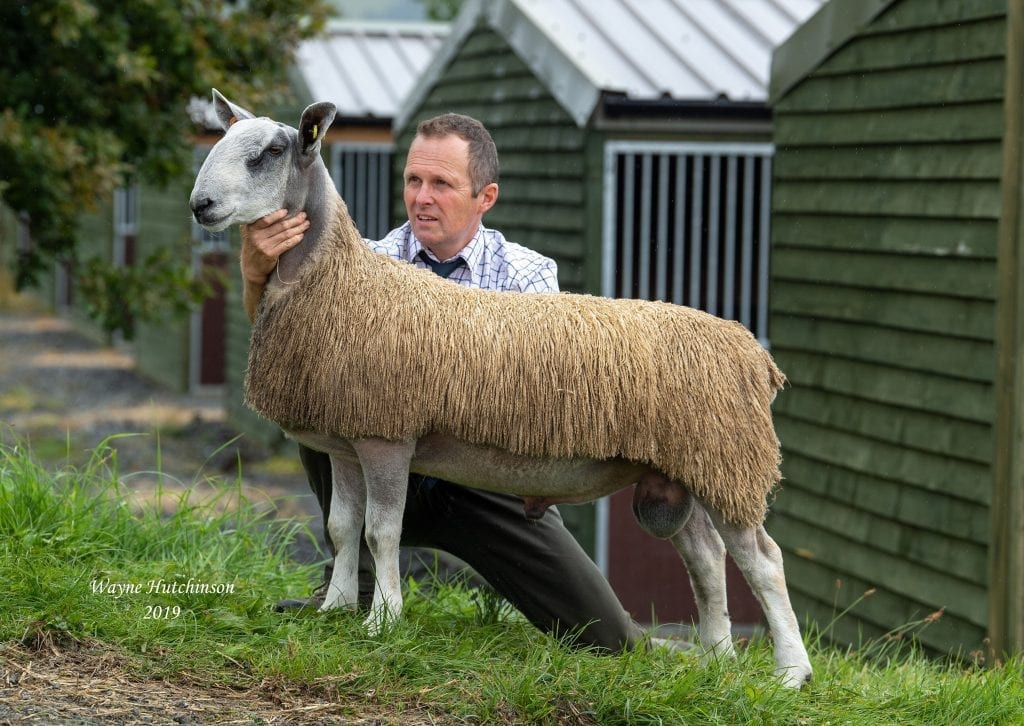 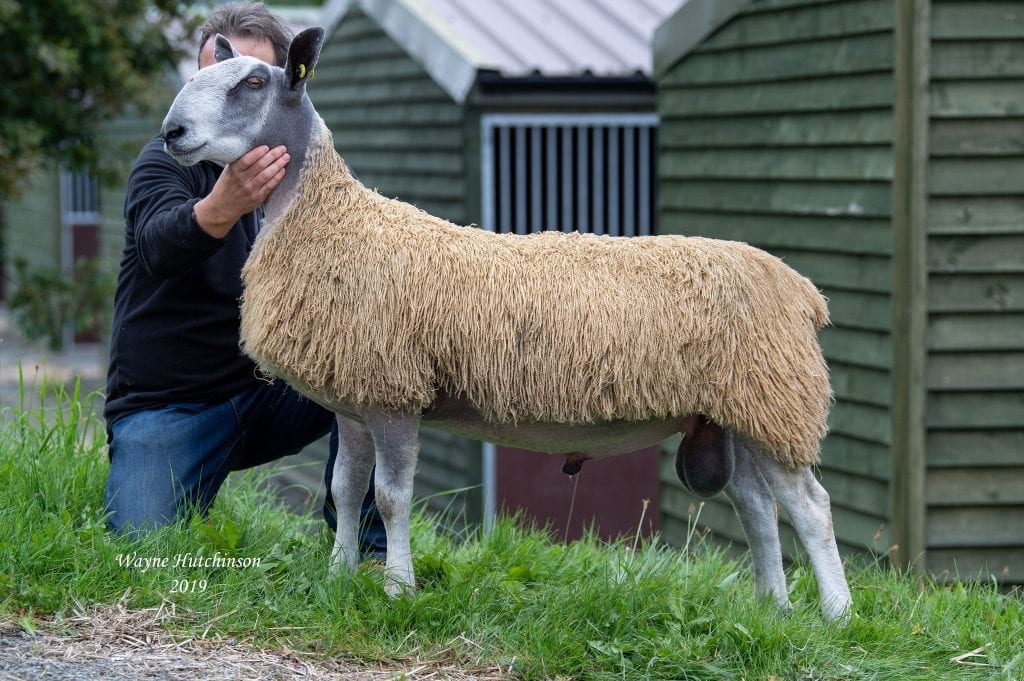 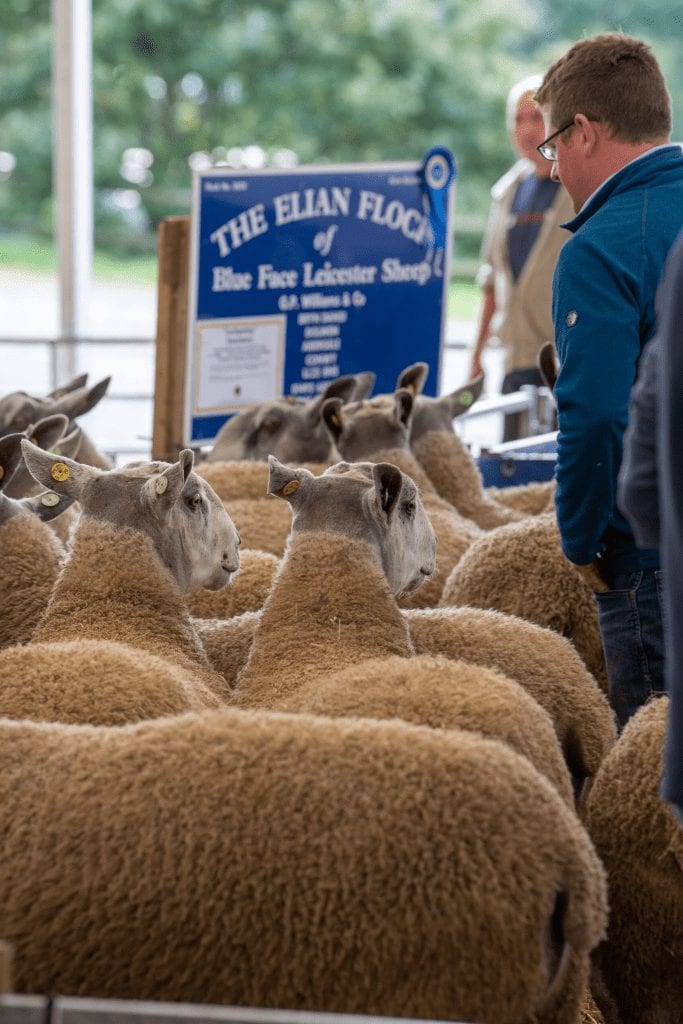 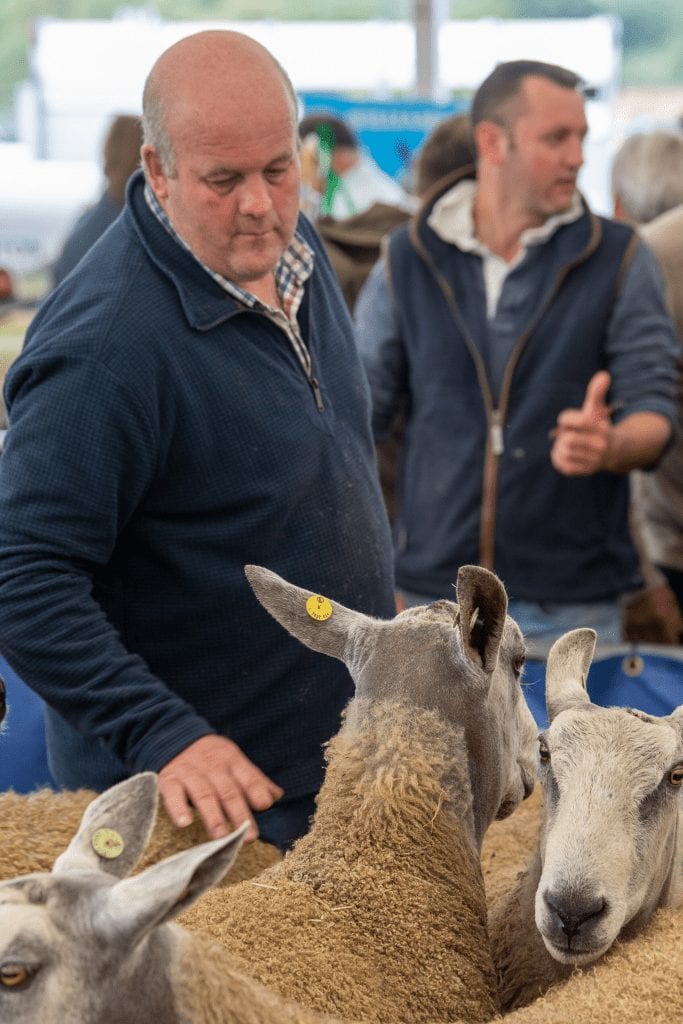 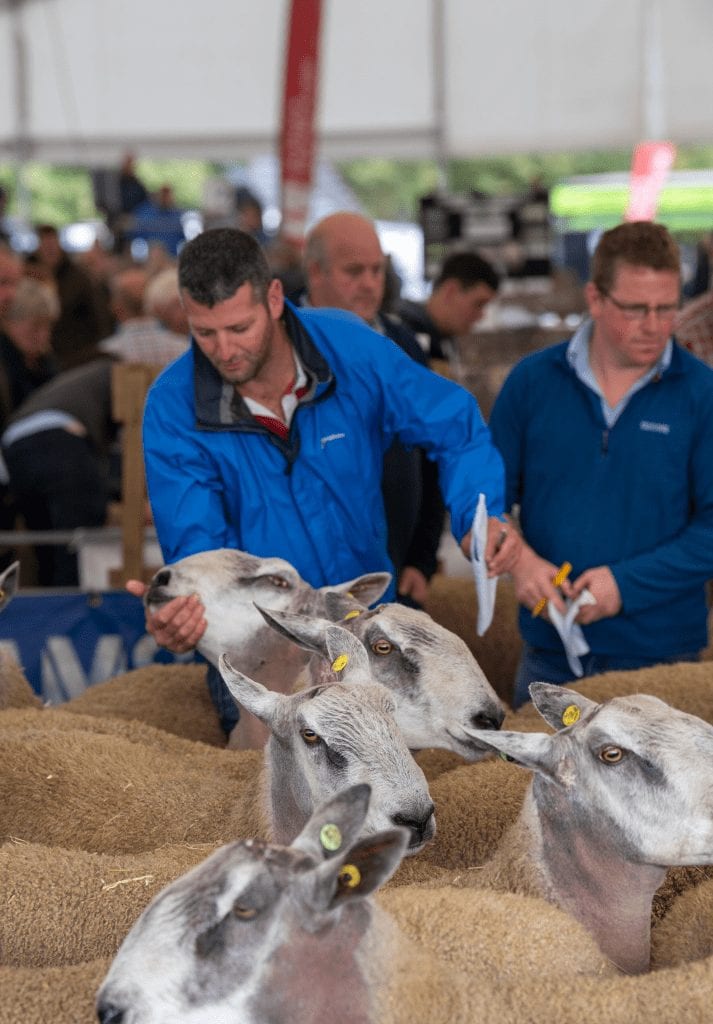 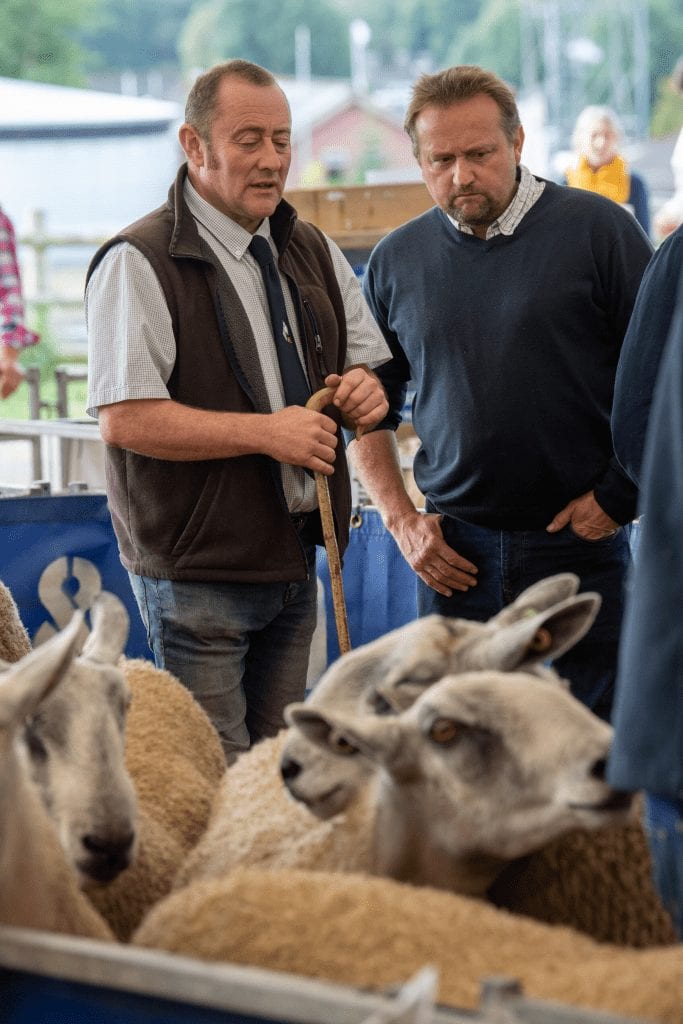 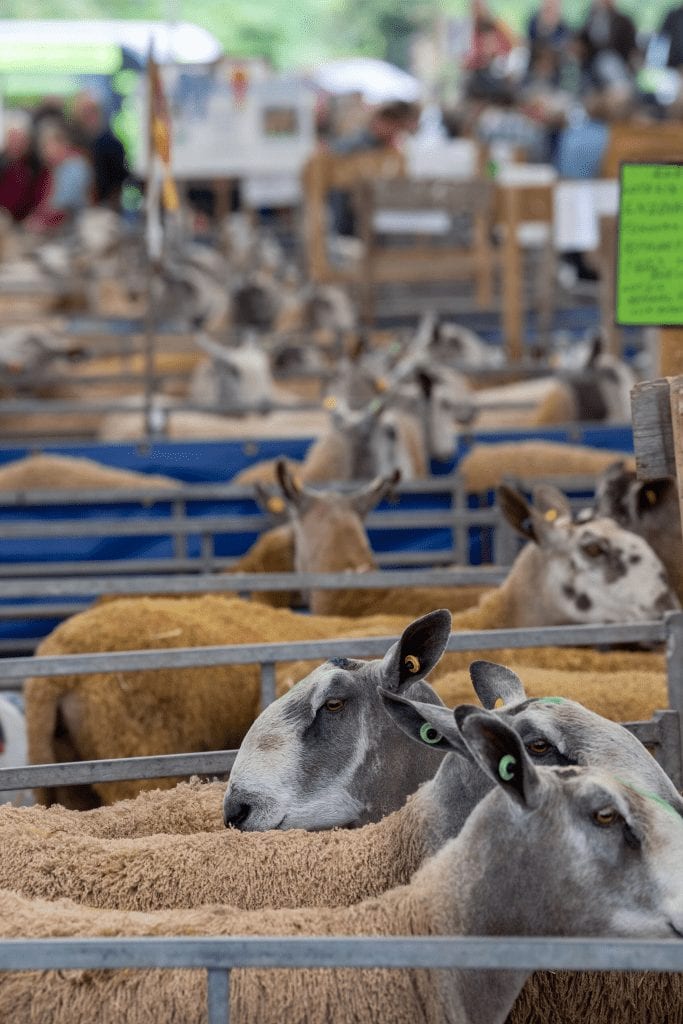 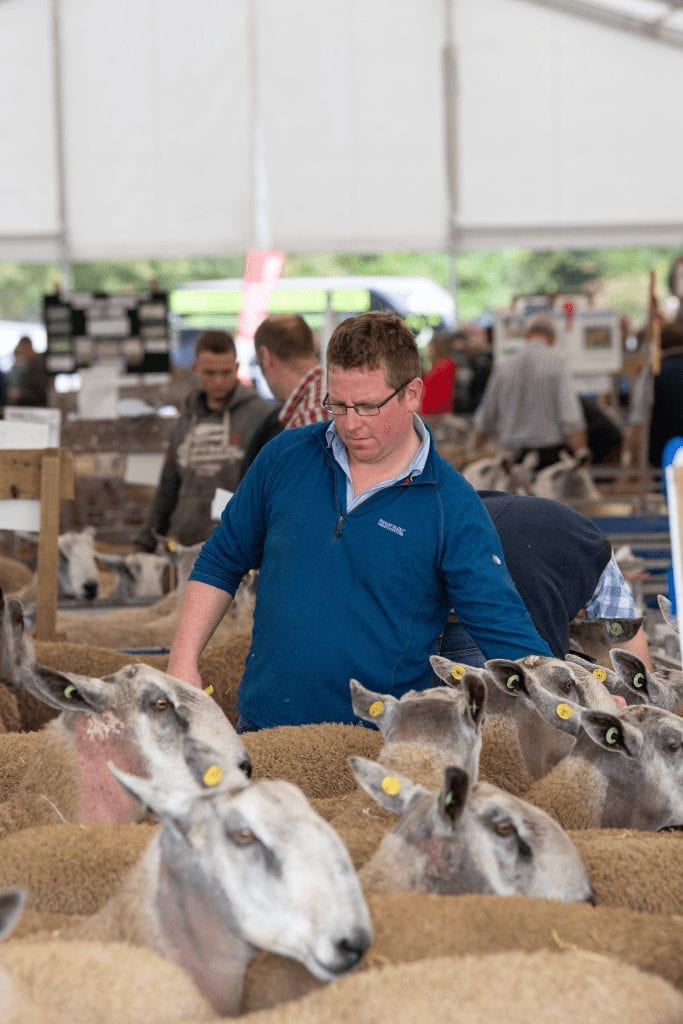