The 2012 Bluefaced Leicester Association sale was held at Ruthin Farmers auction on the 11th October on an unusually fine and clear day. The number of sheep entered increased to 86 with a similar number of yearlings and ram lambs forward and just a handful of females. The pre sale show was judged by Mr Maldwyn Davies of the Grugor flock and Mr Phil May last years judge kindly completed the stewarding duties for the day.

Taking the engraved glass bowl celebrating the Association’s 50th year and supreme champion was Mr Dewi Jones of the Pigot flock. This strong yearling was sired by 3320/A6 Tanhouse Farm E+ and out of a ewe sired by Hewgill Y7. Dewi performance records his flock and this yearling was his highest recorded ram at the sale. It stood with presence and character to take Male Champion and continue all the way to achieve overall honours of the day.

Elfyn Owen took first prize in the ram lamb class for at least the third year in a row which is testimony to the consistency and quality of the Cernyw flock. The ram lamb achieved reserve male champion and was sired by the illustrious homebred Y1 out of ewe sired by Hazelwood X20 and was a worthy winner in a strong and competitive class. The Cernyw flock also performance records its Leicesters, proving character, type and conformation can all be maintained with good stockmanship whilst collecting the data to appeal to the emerging scientific market.

The female class was won by Myrfyn Roberts of the Myfyrian flock with a performance recorded ewe lamb sired by the very successful homebred C1 out of a ewe sired by Ewanston V11. This smart ewe lamb went on to achieve Champion female and overall Reserve champion of the day. The reserve female champion was won by RH Francis of the Ruthin flock with a strong sharp ewe lamb sired by Burndale C4. A very strong Ruthin ram lamb by the same sire was second in its class showing the consistency of this blood line.

Overall a satisfactory sale at the end of the season for the Welsh breeders and we look forward to supporting our Mule breeders and livestock markets in the coming year. 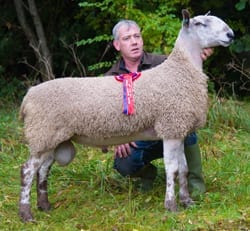 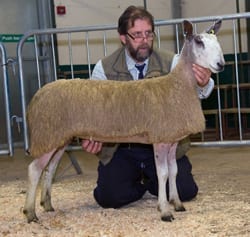 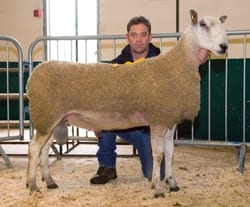