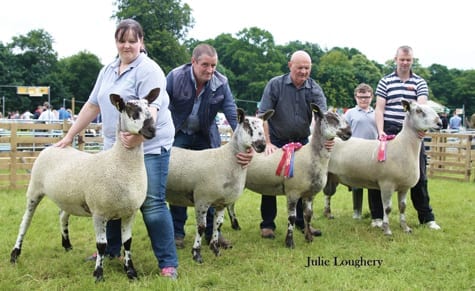 Another strong turnout of Bluefaced Leicesters and Mules were presented at 2016 Antrim Progeny Show, and Martyn Archer, Carryhouse had the difficult task of judging the event this year. In the individual classes, Martyn found his Overall Champion from the Holmview flock of J Adams & Sons who won it last year. Joe, William and Andrew’s first prize tup lamb collected top honour this year, and he is by F7 Firth, a Hawes purchase from Douglas and Derek Hall, and is doing a great job in the flock also siring last year’s champion. Reserve Champion in the Bluefaced Leicester section went to Seamus Laverty of the Orraview flock who is no stranger to the limelight at Antrim with his first prize shearling tup, H8 Cottage purchased from Jimmy and Wendy Bell last year. Following on from his success in the individual classes, Seamus Laverty, Orraview won the top accolade in the progeny show, winning the Overall group with his home bred ram F1 Orraview with his three flashy gimmers. F1 Orraview being a son of Cottage Contraband has proved himself year after year at Antrim. Reserve Champion Progeny Group was awarded to Graham and Julie Loughery, Temain flock with their three sharp ewe lambs by “Mr Grey” H1 Starbog, a E4 Hewgill son, a half share purchase from Hugh Henry.

In the Mule section, Michelle Wright, Mullaghwee dominated the top awards, winning the Championship in the individual section with her first prize ewe lamb. Michelle also went on to win the progeny title with G4 Parkgatestone and his three ewe lambs. G4 was purchased last year for £9000 at Kelso from J & J Cunningham. These three lambs had great skins and colour, and Michelle’s ewe lamb also went on to scoop the Reserve Overall Interbreed Champion of the show which was a great achievement for the Mullaghwee flock and the breed. James Adams received Reserve Champion in the Mule section with his ewe. Oliver and Eoin Loughran, Hilltop, were awarded Reserve Champion in the Mule progeny section with F4 Orravale and his three ewe lambs. 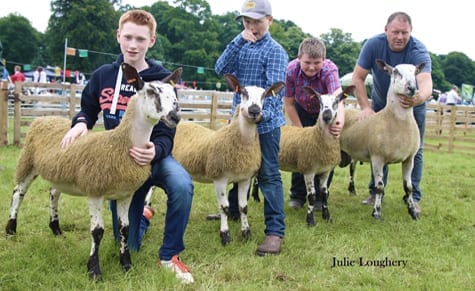 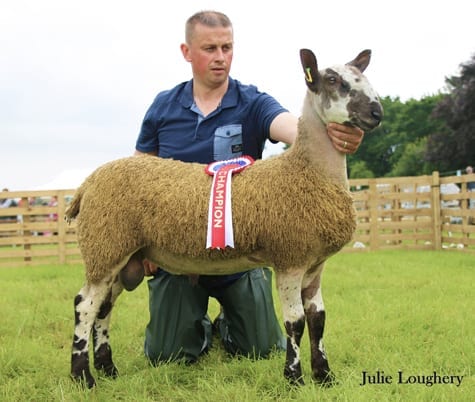 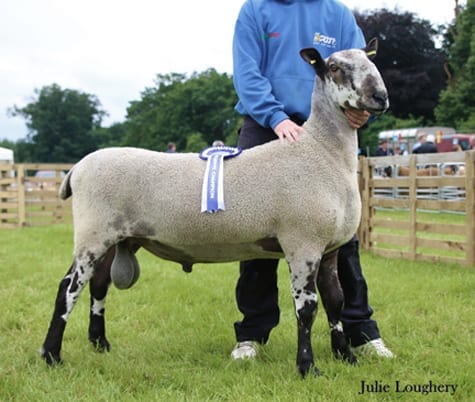 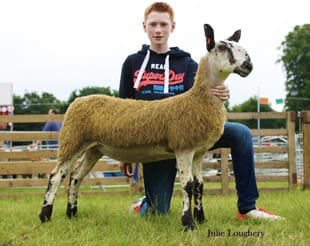 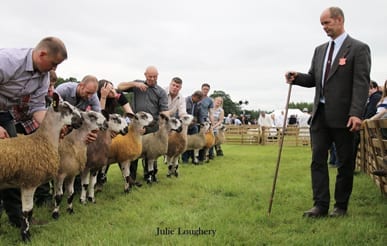 Martyn Archer judging a class at this year's show