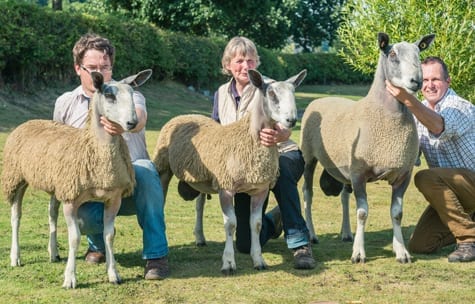 Welshpool Progeny Show 2016
On one of the warmest days of the year, another quality show of Bluefaced Leicesters were brought out for judging at this year’s Welsh region progeny show held within Welshpool Livestock Auction by kind permission of Welshpool Livestock Sales.

Bluefaced Leicester Classes
The judge this year for the Bluefaced Leicester section was Mr Michael Gray from the Northumberland based Espley flock. In the open classes Michael awarded his overall champion to the female champion which came from S A & R P Jones, Craig Yr Orsedd flock. She is a triplet lamb out of a homebred ewe 3363/C56 which was sired Edgton B14 whose bloodlines go back to Kilfaddoch W7 which was bought out of the Kelso Ram Sales by Helen Forsyth. The sire of the ewe lamb is a homebred ram Craig Yr Orsedd E25, and he is out of a homebred ewe Z69 sired by Scrainwood T29. E25 bred the open class winner at the 2015 progeny show, a yearling ram which sold at the Builth Wells NSA Ram Sales last year for £1800. E25 is also the sire of this year’s reserve female champion, a shearling gimmer from Miss Jacqui McLeod, Wanstead.

The reserve overall champion was awarded to the male champion, a homebred two year old ram from the Cernyw flock of Elfyn Owen – 1070/G1 Cernyw Gladiator. Gladiator is sired by 1070/C15 Cernyw Muscleman ‘Elite’ out of a Derwenlas Ewe 3822/D41 bred by Phil May, and has been shown previously this summer achieving amongst his list of awards – Reserve Male Champion at this year’s Royal Welsh Show. He is a performance recorded ram with an Index of 157, and is within the top 5% on muscle depth and top 10% on scan weight and mature size. Some of his offspring will be offered for sale at this year’s Association sales.

Reserve male champion was awarded to Myrfyn and Jayne Roberts from the Myfyrian Flock with their 1st prize ram lamb from the open class. He is a homebred ram lamb 1183/J2 sired by 2814/G2 Street, out of a homebred ewe 1183/D15, and is entered for this year’s NSA Wales & Border Ram Sale at Builth Wells. The ram lamb was shown this summer at the Anglesey County Show where he was awarded Male Champion and Reserve Supreme.

The reserve female championship was awarded to the first prize shearling gimmer from Miss J McLeod, Wanstead. She is an ET sired by 3363/E25 Craig Yr Orsedd and her dam is a homebred ewe sired by 2832/Y8 Elian Nigel. Jacqui’s gimmer has also been successfully shown this summer gaining 3rd prize in a large class at the Royal Welsh Show, 1st prize at the Eglwysbach Show, and finishing the season off on a high note by being awarded the overall champion Bluefaced Leicester at Denbigh and Flint Show.

In the Bluefaced Leicester progeny classes, again a great show of groups were forward for judging and Michael awarded his champion group to Myrfyn and Jayne Roberts from the Myfyrian flock with their group – recorded ram lamb and ewe lamb with their sire. The sire is 2814/G2 Street, and the ewe lamb is out of homebred ewe 1183/F14 who has been shown successful throughout the summer. The ram lamb is 1183/J1 out of another homebred ewe 1183/B38 who has been a consistently good breeder for the flock over the years. The ram lamb 1183/J1 is also being offered for sale at this year’s NSA Wales & Border Ram Sale at Builth Wells.

The reserve champion group was awarded to S A & R P Jones, Craig Yr Orsedd flock with their first prize group of three ram lambs all by the same sire, Arkleby B1 E+. The lambs are embryo lambs, two of which are out of a homebred ewe 3363/B37 whose bloodlines go back to the 119/Z2 Cocklaw which was bought out of Hexham as a lamb. The third lamb is out of another homebred ewe 3363/Z69, and is a full brother to homebred E25 and G1 which was top price at the 2014 Builth Wells NSA sale selling for 3000 gns to Alan McClymont to join the Kirkstead flock. These three lambs will be offered for sale at this year’s Builth Wells NSA and Carlisle sales.

Mule Classes
In the Mule section our judge for the day was respected Mule breeder Mr Eric Hughes. In the open classes another outstanding run of sheep were put before the judge. In the aged ewe class, Will Jones, Gwenthriw came away with the red rosette, and also took top spot in the shearling ewe class. In the Mule ewe lamb (coloured type) class, the honours were awarded to Mrs Wendy Jones, Upper Rheol who also took first prize in the Mule Ewe Lamb (whitefaced type) class with John T Armstrong from Herefordshire taking the first prize in the Mule ewe lamb (any other type) class. From all the first prize winners, Mr Hughes awarded his breed champion to the 1st prize shearling ewe from Will Jones with reserve awarded to the 1st prize aged ewe also from Will Jones. The shearling ewe was purchased in the Autumn of 2015 amongst a pen of 20 bought for £185 per head. Both the ewes were sired by Llanilltyd rams bred by Idwal and Tom Jones, Libanus, Brecon out of Beulah ewes bred by Tudor Bound, Cefnbach, Oakley Park, Llanidloes

Progeny Show - Three Ram Lambs With Or Without Sire

Progeny Show - Three Ewe Lambs With Or Without Sire 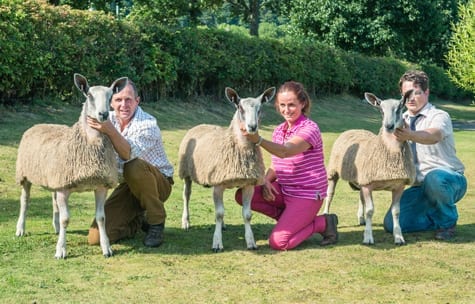 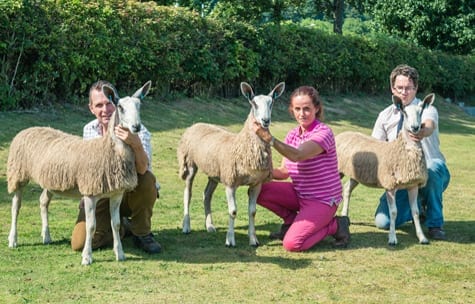 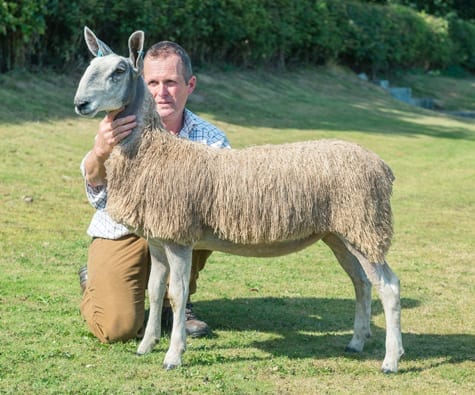 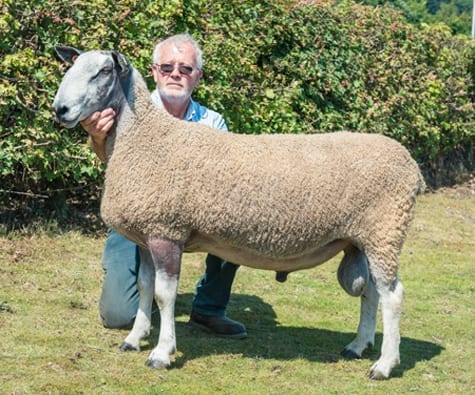 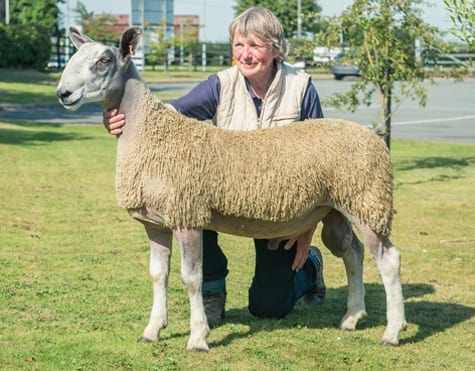 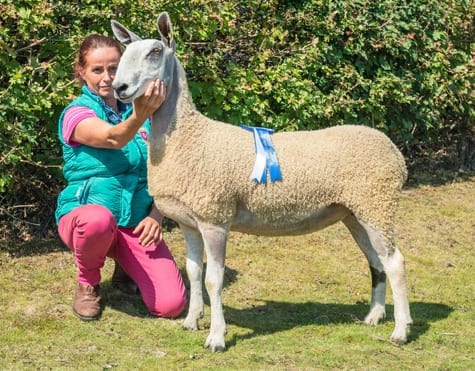 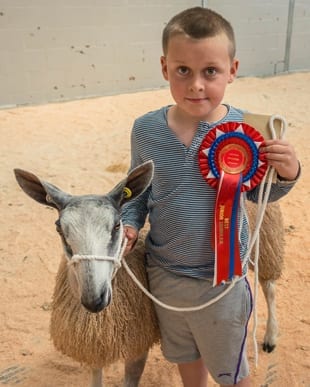 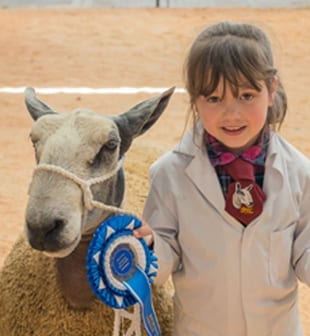 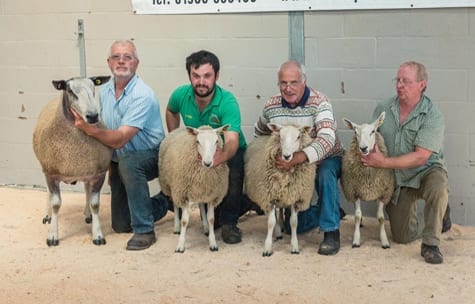 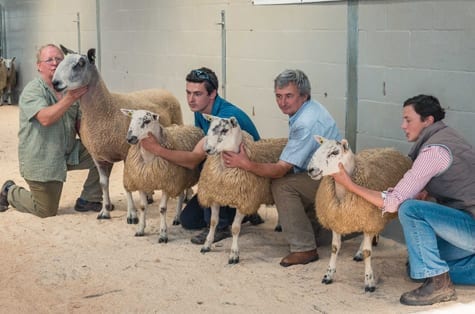 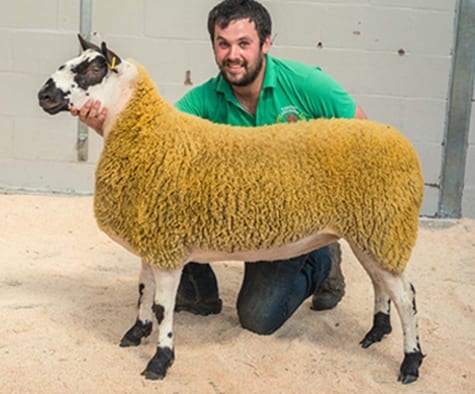 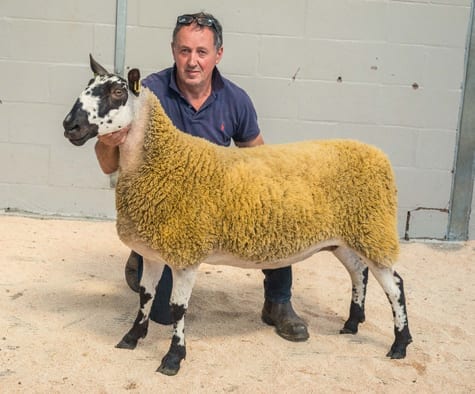