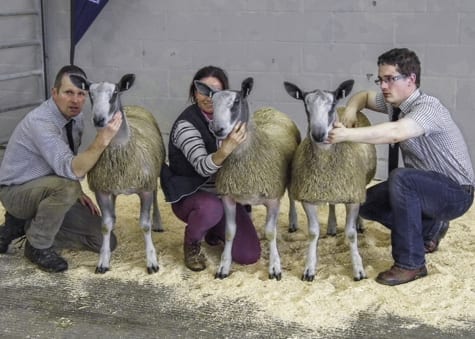 Bluefaced Leicester Classes
With excellent numbers of quality entries forward in all classes it was never going to be an easy job for our judge this year for long time member of the Association Mr Brian Dallyn, Killington flock, who had made the journey from his home in North Devon to preside over proceedings.

In the open classes after a lengthy judging session Brian awarded his overall champion to the male champion which came from  S A & R P Jones, Craig Yr Orsedd flock, showing a homebred shearling ram 3363/G30 sired by a homebred ram 3363/E25 which was shown successfully in the aged ram class coming away with the red rosette. He was sired by the 3865/B1 E+ Arkleby, a ram who has produced a tremendous string of progeny year after year for the Craig Yr Orsedd flock.

The reserve overall champion was awarded to the female champion a homebred shearling ewe shown by Dewi Parry, Nant-y-Glyd flock 4290/G014 who was sired by 3649/C1 Wanstead E+ out of a Hazelwood ewe.

Reserve male champion was awarded to Paul Howell with his 1st prize ram lamb from the Long Mynd flock and he was sired by 4395/G1 Daisy. The ram lamb was also awarded the best skinned sheep prize.

The reserve female championship was awarded to the first prize aged ewe from Miss J McLeod, Wanstead. The ewe is a homebred ewe C3649/C21 sired by 2832/Y8 Elian Nigel.

In the Bluefaced Leicester progeny classes, again a great show of groups were forward for judging and Brian awarded his champion group to S A & R P Jones, Craig Yr Orsedd flock with their first prize group of three ram lambs by the same sire, 3865/B1 E+ Arkleby.  This is the fourth year in a row Aled Jones has taken the crown in the progeny section, his third year with Arkleby B1 E+ progeny (2012, 2013 & 2015) and in 2014 the sire for the champion group was the homebred ram 3363/E25.  This is a tremendous achievement for the flock and for Aled as a breeder who year after year continues to produce prize winning stock.

The reserve champion group was awarded to S A Harding, Shrewbridge flock with a group of three shearling ewes by the same sire, and these were all homebred ewes sired by 3570/E3 Long Mynd out of homebred ewes.

Mule Classes
In the Mule section our judge Mule and Bluefaced Leicester breeder Mr Richard Ellis from the Ilkley Moor flock was also well travelled, coming down from his home in the Yorkshire Dales.

In the open classes another outstanding run of sheep was put forward for our judge.  In the ewe class M/s Jones & Tibbott, Gwenthriw, came away with the red rosette, and they also took top spot in the shearling ewe class.

In the Mule ewe lamb (coloured type) class there was a large class of 20+ lambs put forward for judging and this was a difficult class to judge and Richard eventually awarded his first prize to a sharp colourful lamb from M C Roberts, Myfyrian, with Stephen Abberley, Old Hemley gaining the blue rosette.

In the progeny group section there was another strong show of groups forward for Richard Ellis to judge.  The overall champion group was awarded to the group of three Mule Ewe Lambs (coloured type) shown with their sire shown by Michael James, Duhonw. The sire is 2851/F4 Low Tipalt who Michael owns in partnership with Idwal & Tom Jones, Llanilltyd, and the three ewe lambs were out of Beulah ewes.

The reserve group was awarded to Miss Daisy Williams, Daisy flock with her group of three Mule ewe lambs (whitefaced type) and these were sired by a homebred ram 4395/F1. 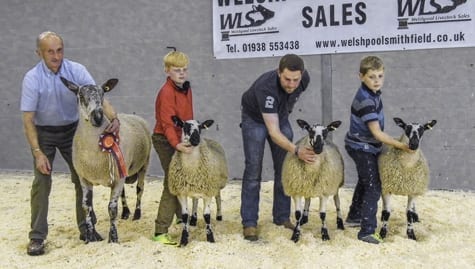 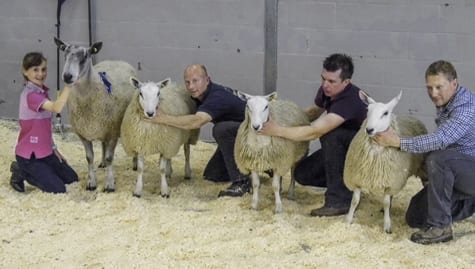 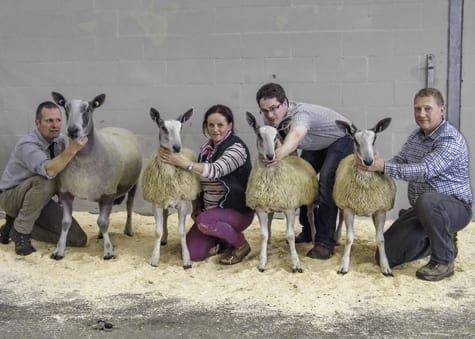 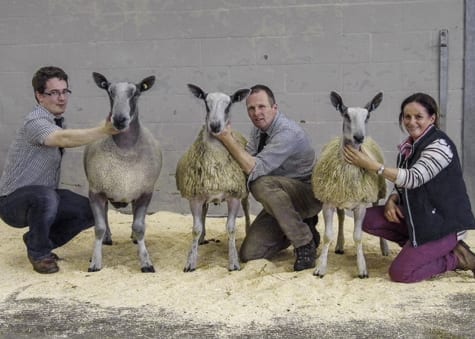 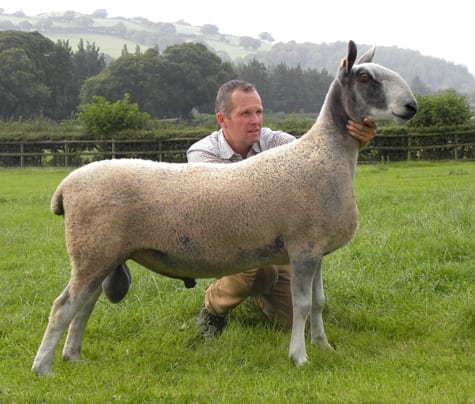 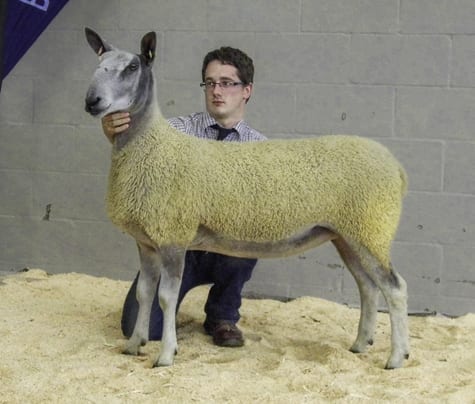 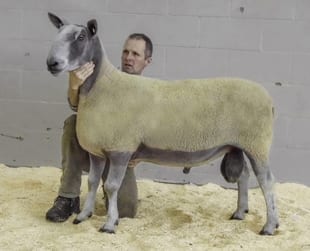 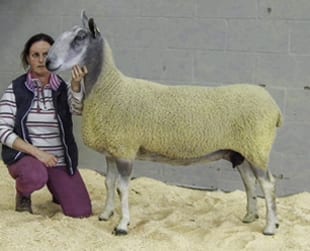 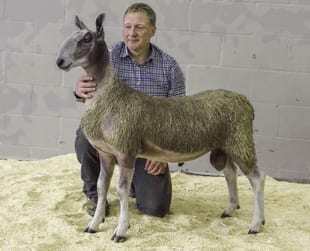 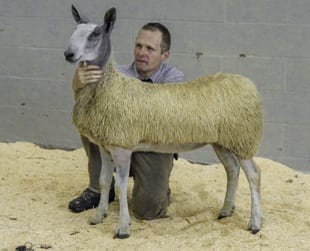 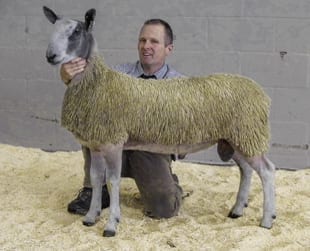 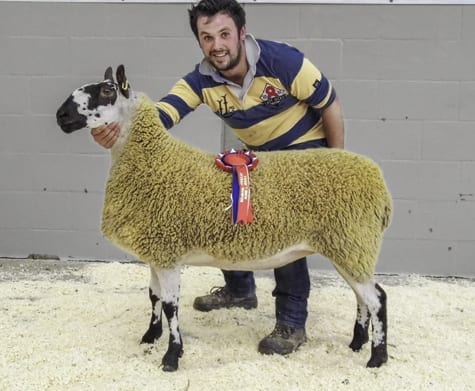 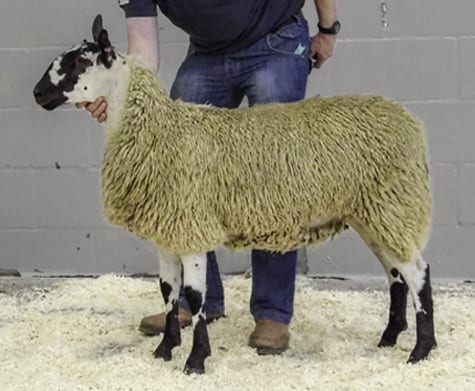 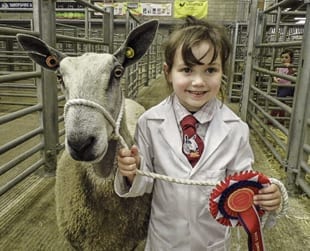 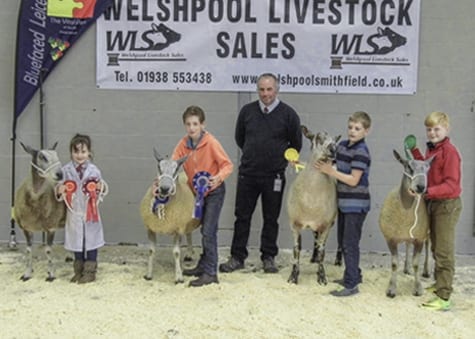