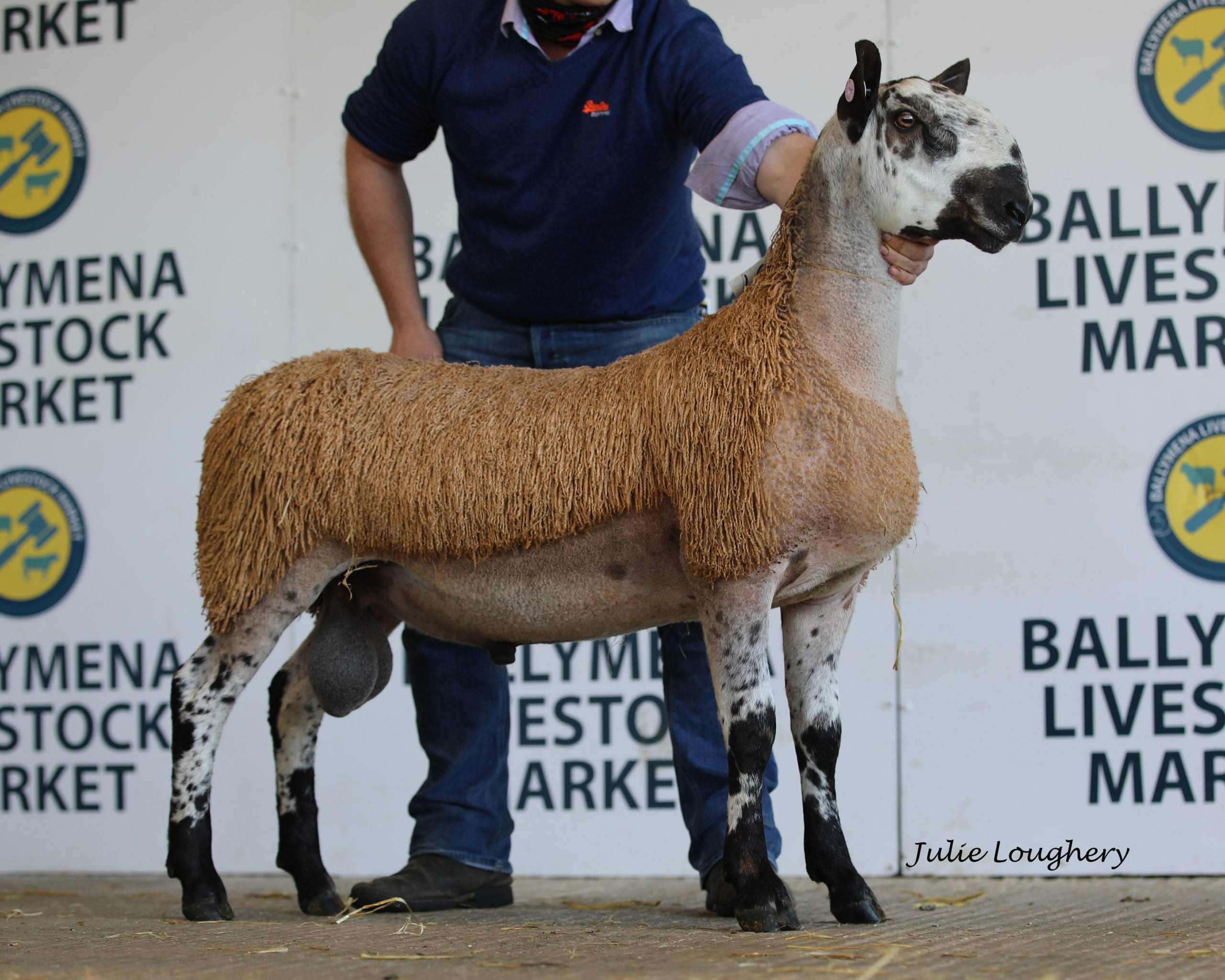 Once again, the Ballymena Bluefaced Leicester Sale was met with excellent quality stock which met the demands of the buyers from neighbouring regions.  The hype surrounding the sale brought an excited atmosphere to the sale ring on the day.  Each year the sale’s success has heightened and arguably the opportunity for export has benefited the breeders; twenty percent of the shearlings and almost forty percent of the ram lambs travelled to new homes outside the region.  Many roads lead to the sale, with terrific trades in the Mule world; buyers were eager to shop for lots that carried blood to produce colour and skins. With the introduction of a second ring to sell the females the sale wrapped up more rapidly than in other years.  The throwback of Covid saw the ever evolving use of online bidding.  Albeit back in March it was difficult to envisage how the sale would happen but fast forward to Saturday and breeders saw an increment of 175gns on shearlings and a jaw dropping rise of 608gns on ram lambs from last year.  Females held their average on comparison to 2019, with a small decline of 6gns on the year.

Topping the trade was Declan McKillop from the renowned Gaints Causeway Flock, Declan’s hunger to breed today’s choice rams saw his first lamb hitting 23,000 gns.  Not just the top price on record for the day but the highest priced Bluefaced Leicester Ram Lamb sold in the region. This powerful, clean lamb is by L1 Farden Popeye and out of a K14 home breed ewe which breeds back from E1 Hewgill. L1 Farden has really done well within the flock and for all those within the consignment, with many high prices being seen last year too, a reflection on the quality of the lambs. The combination of top bloodlines caught the eye of many potential bidders on the day but the hammer fell and he headed across the water to Shitlington, Dawyck, Hamildean, Newbigging Walls and Happrew out muscling other bidders.  Declan’s success story didn’t stop here for his Popeye sons with his next lamb reaching 3,200gns, with the dam going back to the Ty-gwyn blood and with fast bids saw the hammer fall on Hogg, and heading across the water to Scotland.

Following the day’s trade and having one of the best trades ever seen at this sale, was the noted Temain flock from the Loughery family.  The anticipated wait for their lambs saw an explosive atmosphere; a blanket of colour on clean white generated a hunger between buyers to get them home. The first three lambs were embryo brothers by Yore House Maverick M01 and certainly crabbed the attention of both crossing and pure breeders. The bidding started and William Blackburn auctioneer shuffled through the gears as the bids came thick and fast, finally settling at 19,000 gns, selling to Alan Shennan, Farden and Jamie Pirie, Blarnavaid. The dust hadn’t settled until the next tup paraded in, again setting off high and the hammer falling a few minutes later at 10,000 gns to T. Wray, M. Kelly, and M. Conway with the Loughery family retaining a ¼ share in this appetising lamb. The third embryo brother in, then sold for a slightly more modest 5,500 gns selling to Sarah Jane Loughery, Gortnarney.  Temain’s, consistent Mule breeding paid testimony to their prices with their fourth lamb into the ring saw the hammer fall at 6,500 gns and heading to the Southern Region to the acclaimed Maskview flock, again the traits of the Yorehouse coupled with the exceptional blood of the home bred dam saw intense bidding from the Staunton Family to take the trophy home. Following on from this, K. Mc Fadden who had sold for the first time at the sale spotted the Temain N04 and outbid the competition ending at 4200gns for another Yorehouse son with bloodlines on the dam side which travel back to Hewgill K5.  Against all the success of their lambs, the Loughery family also saw leading prices in the Shearling section, seeing 3,600gns,  3,400gns  and 3,200 gns for three home breed sheep, the bloodlines of both Hamildean and Cottage attracted mule breeders to the pen. Overall an excellent achievement for one of the most noted flocks within the breed.

Another personal best was from Brendan Mc Alister from the Aughaboy flock, when his tup, N01 sold for 14,000gns attracting much attention for his sheer size and power as well as his looks. His bloodlines were very impressive too, sired by Gaints Causeway M04, going back to the impressive L1 Popeye, which was 10,000gns at Hawes a couple of years back and out of a Drimsynie ewe. The flock has been re-established and this the first outing has certainly been one for the records. He was bought by W. Adams, Holmview and Alister Christie, The Fields.  Brendan’s triumph continued with his next lot an embryo brother seeing the hammer drop at 5500 gns and making his way to Scotland to the Hartside Farm.

As always, Dominic McCrystal from the Drummock flock saw a great trade for his pen of big strong tup lambs. This year’s pen topper was by a Tievebuaile tup, the renowned mule breeding flock, went and sold for 12,000gns in half way share to Adam Porter and Michelle Wright, Mullaghwee, the character, correctness and colour attracted the bids on the day.  Dominic also saw success with his first lot fetching 3,200 gns for a Hundith, Midlock cross lamb which came in the belly from the January 2020 sale.  This attractive lambs new home reside in the Southern Region with Paul Salmon from the Firmont Flock.

One of the big hitters in the Mule trade enjoyed a good trade, was the Blaney Brothers and the Tievebuaile flock bringing out an impressive line of stock. Full of power with great colour and a crisp white, their pen topper turned heads at the sale and with the bloodlines flowing through him he was always going to be a top target, by L6 Hewgill Sire sold for 7,500gns to Brendan McAllister, Aughaboy following on the Blaney Boys received 4,600gns for N4, another by the Hewgill selling to James & Jason Mills.

Eamon Harkin Moneygran received 4200gns for his leading lamb by M1 Penhill, selling to a consortium of Southern Irish Breeders

William Adams, Holmview hasn’t been far from the top end over the last few years and had another good steady trade topping at 4000gns for his N4 by J1 Carryhouse selling to Scotland to D& L Graham, Burnbank. 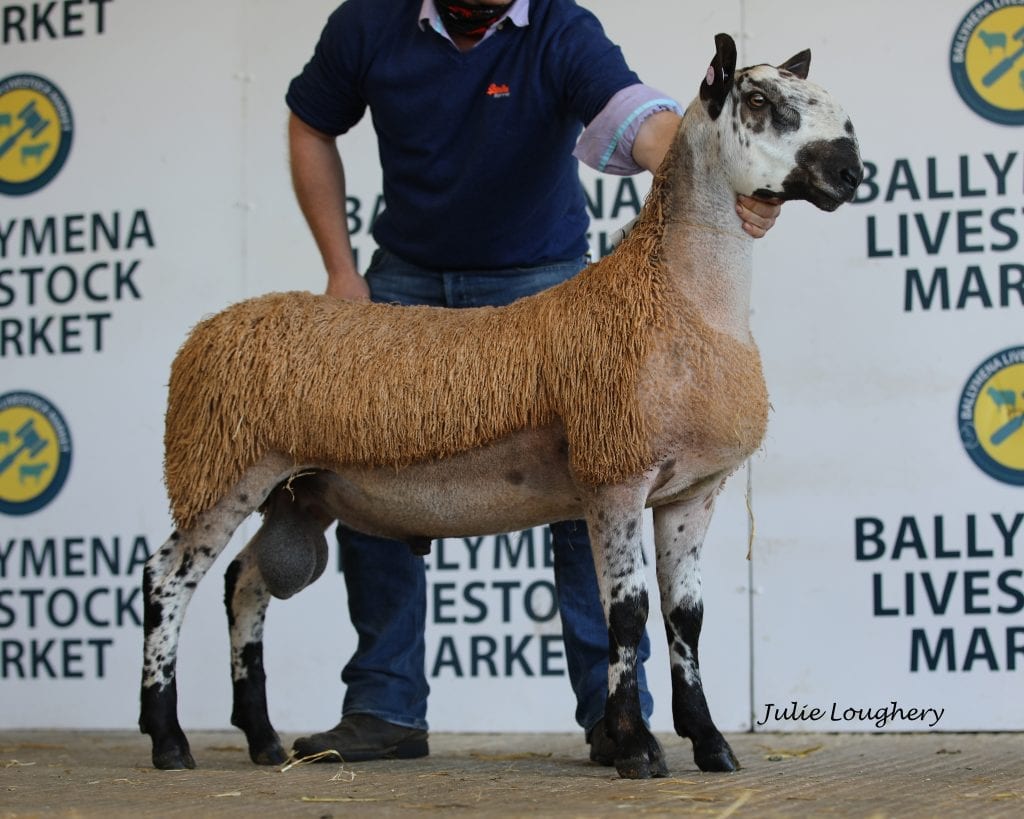 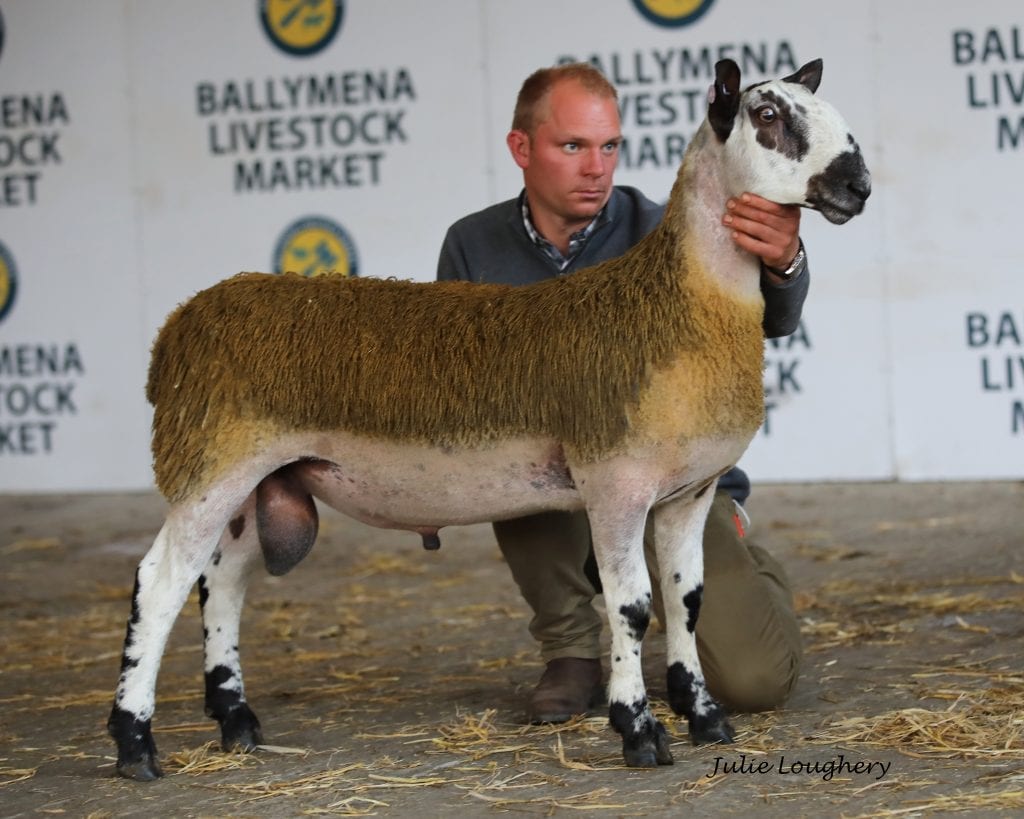 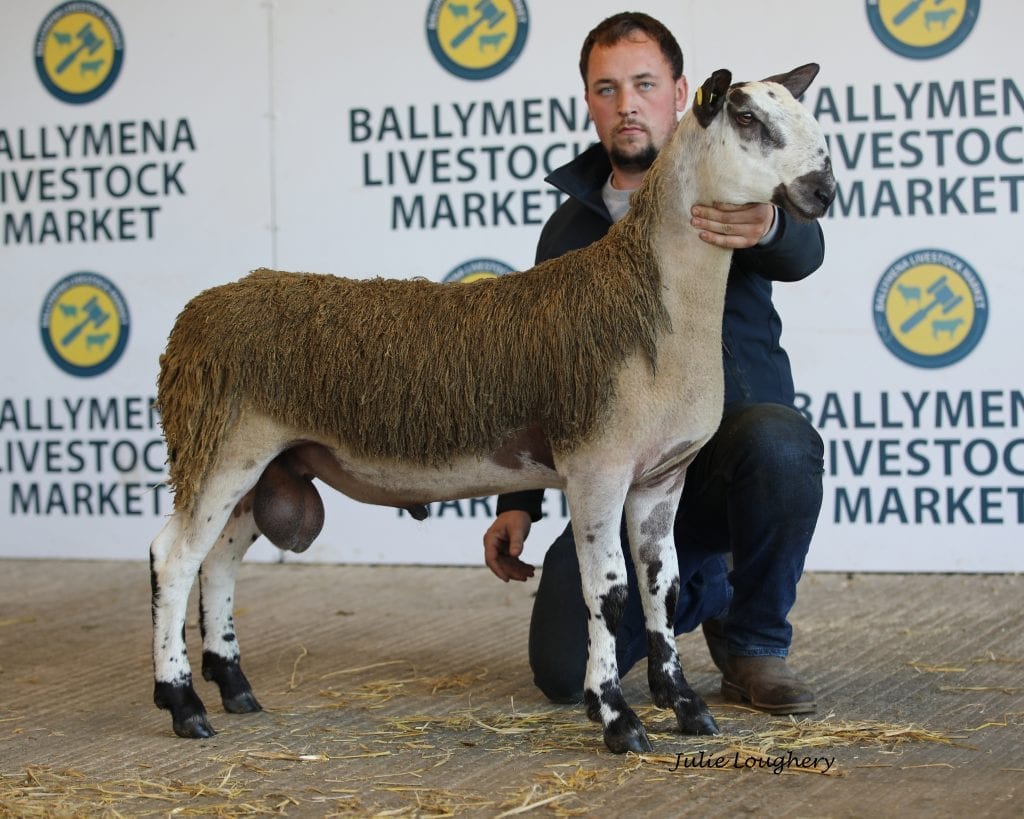 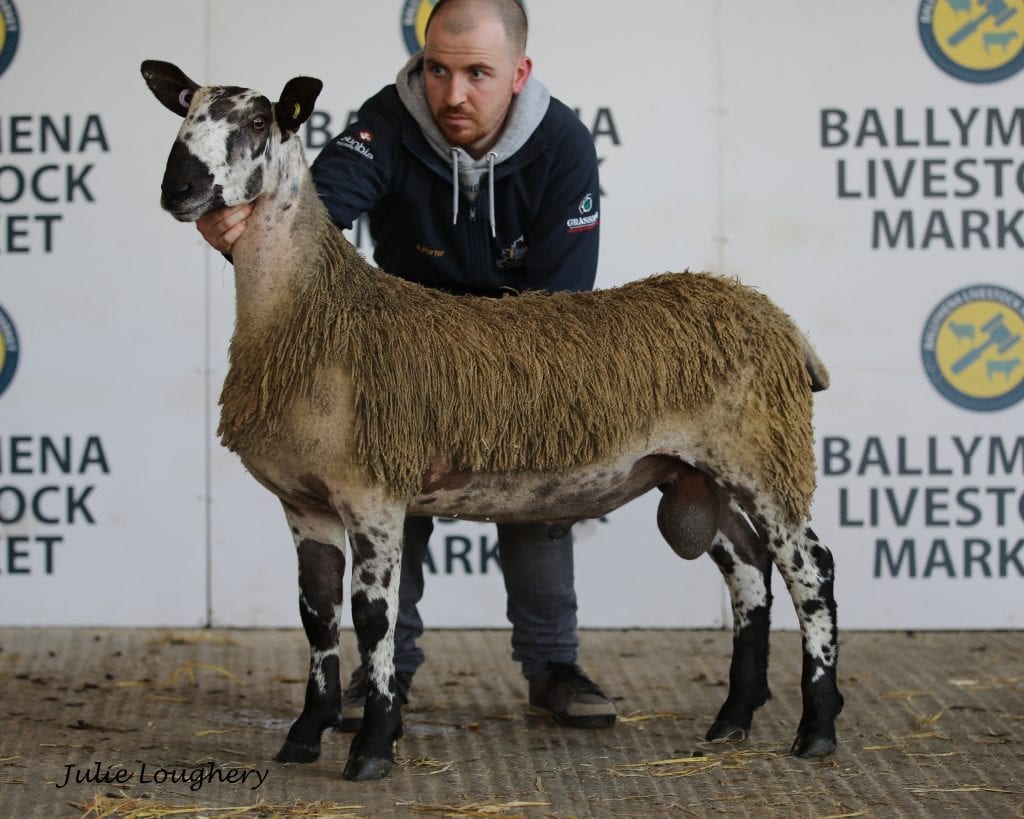 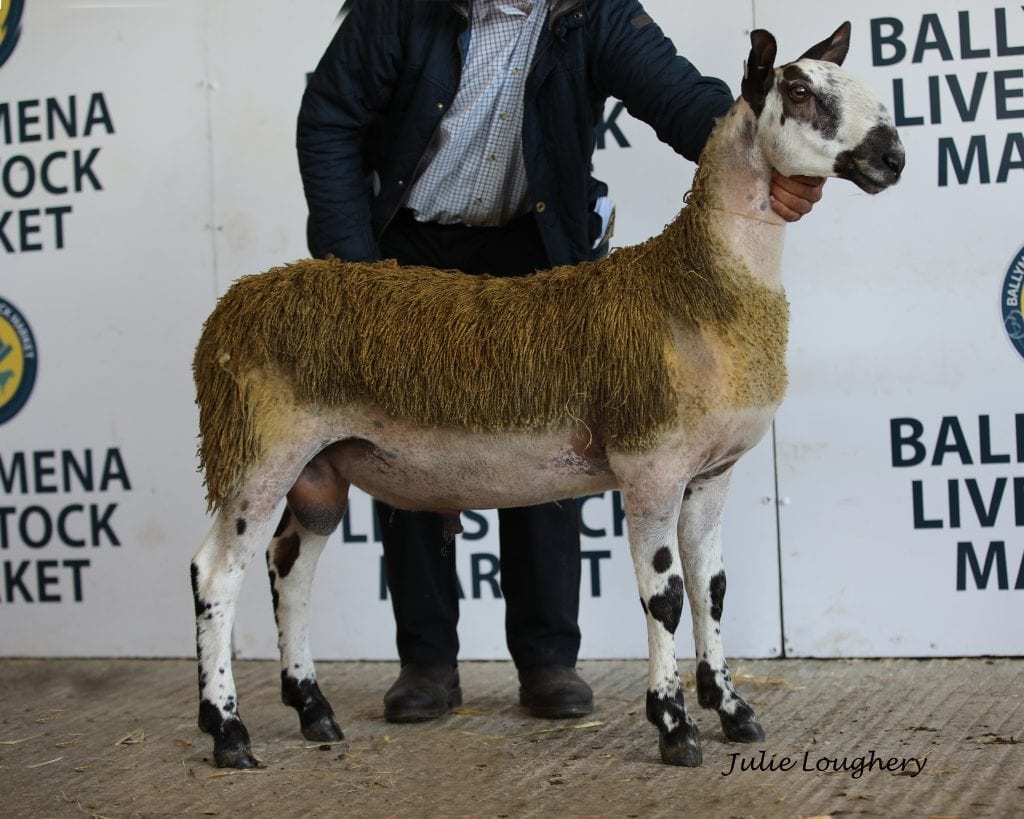 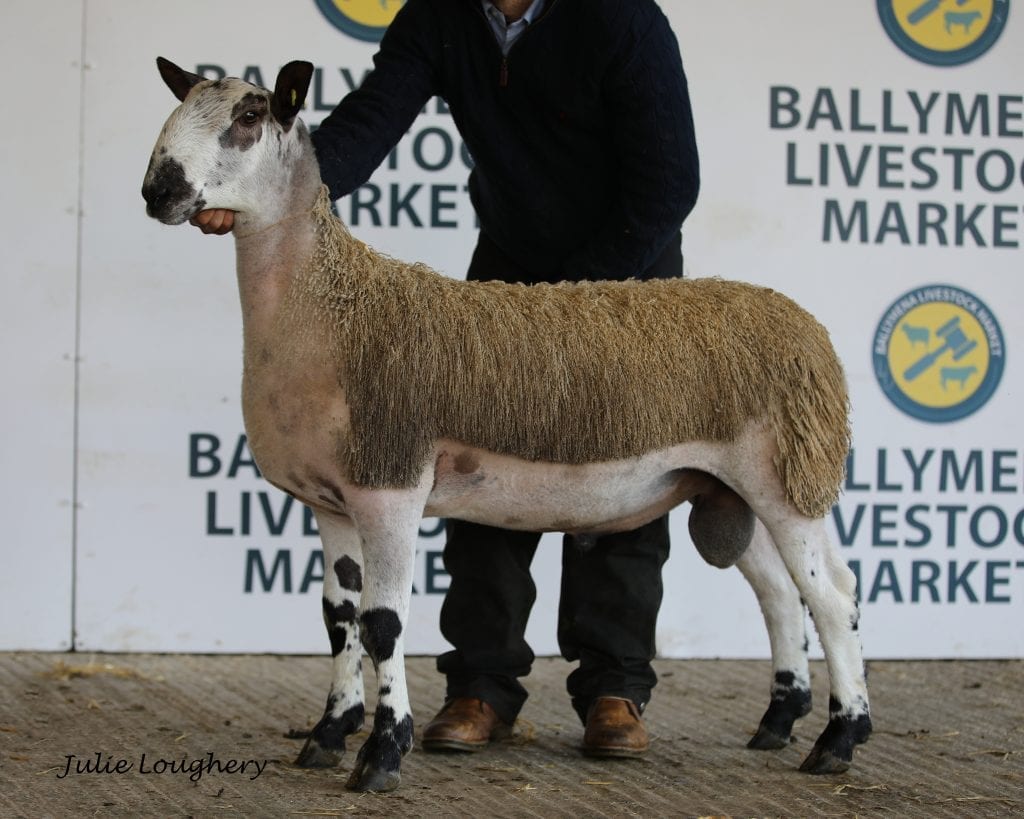 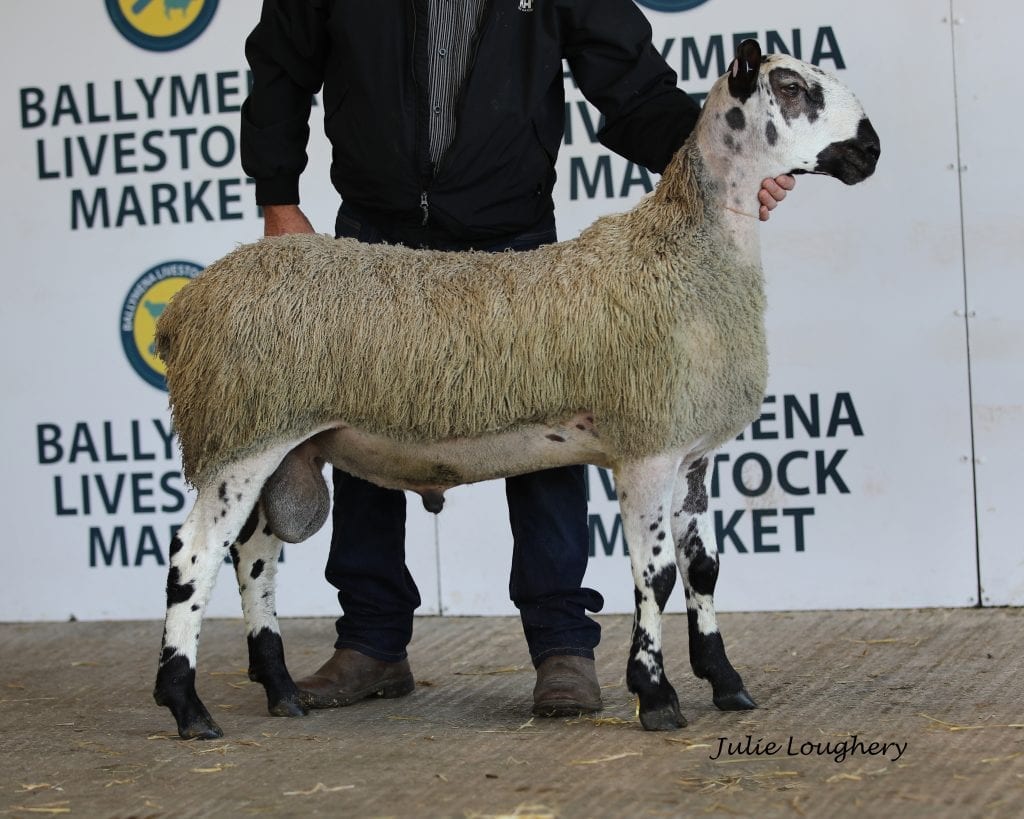 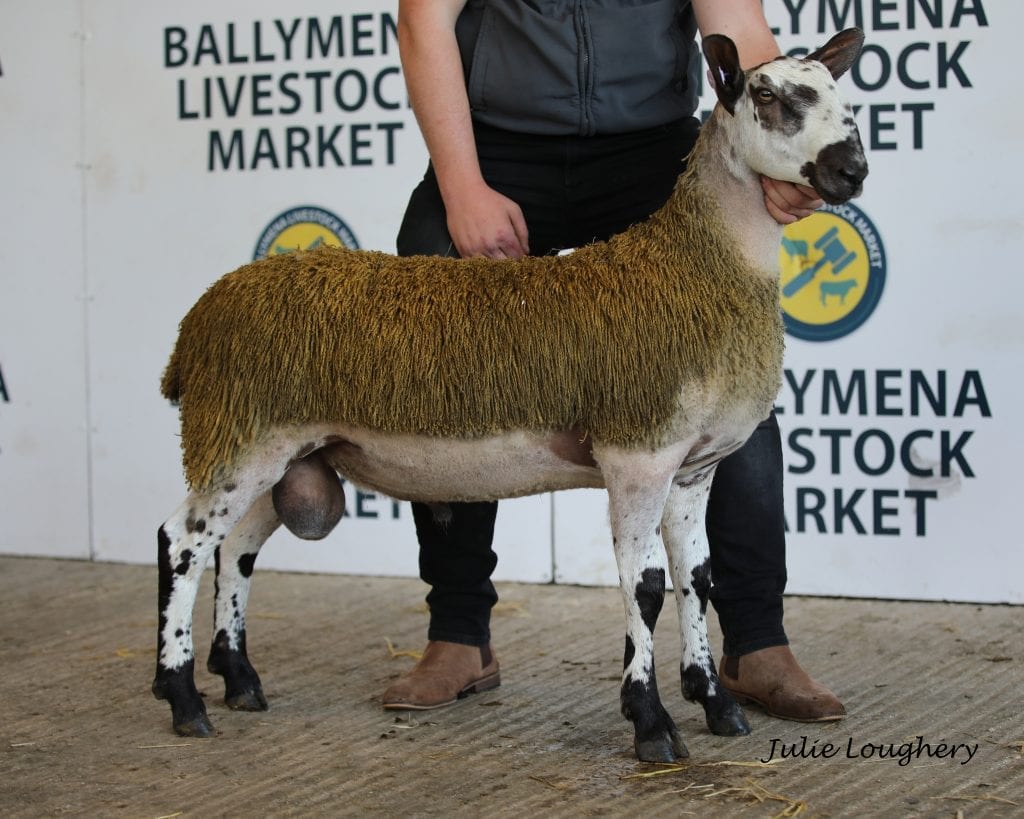 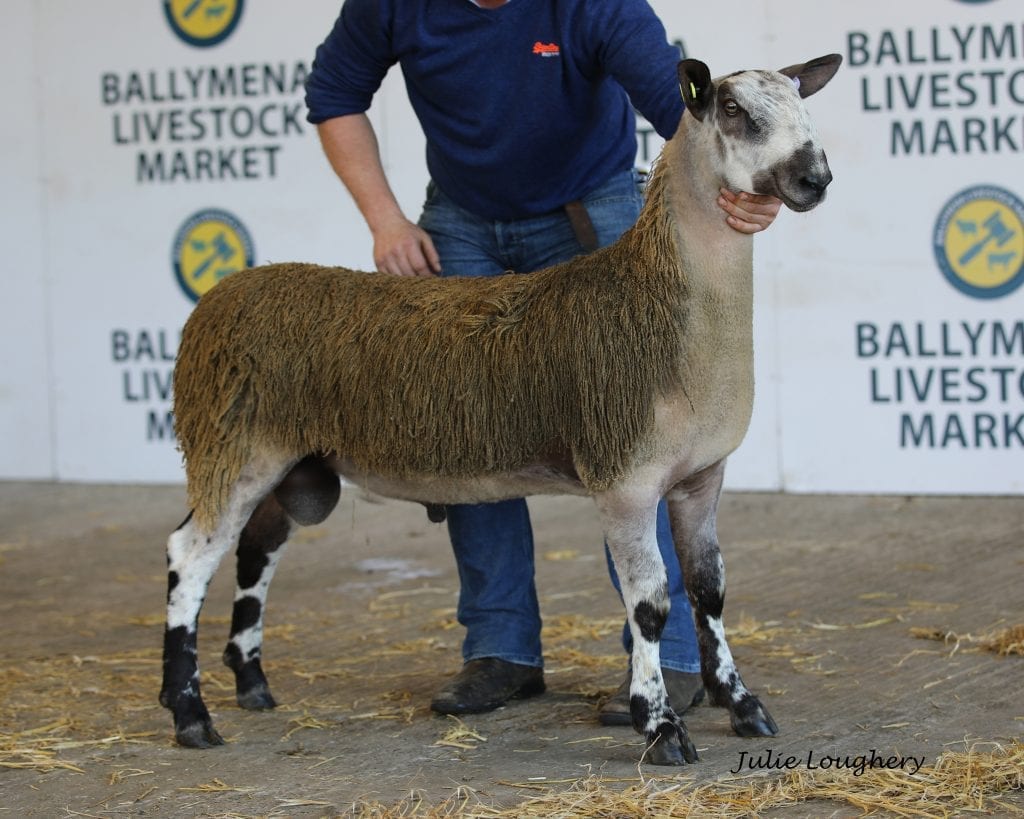 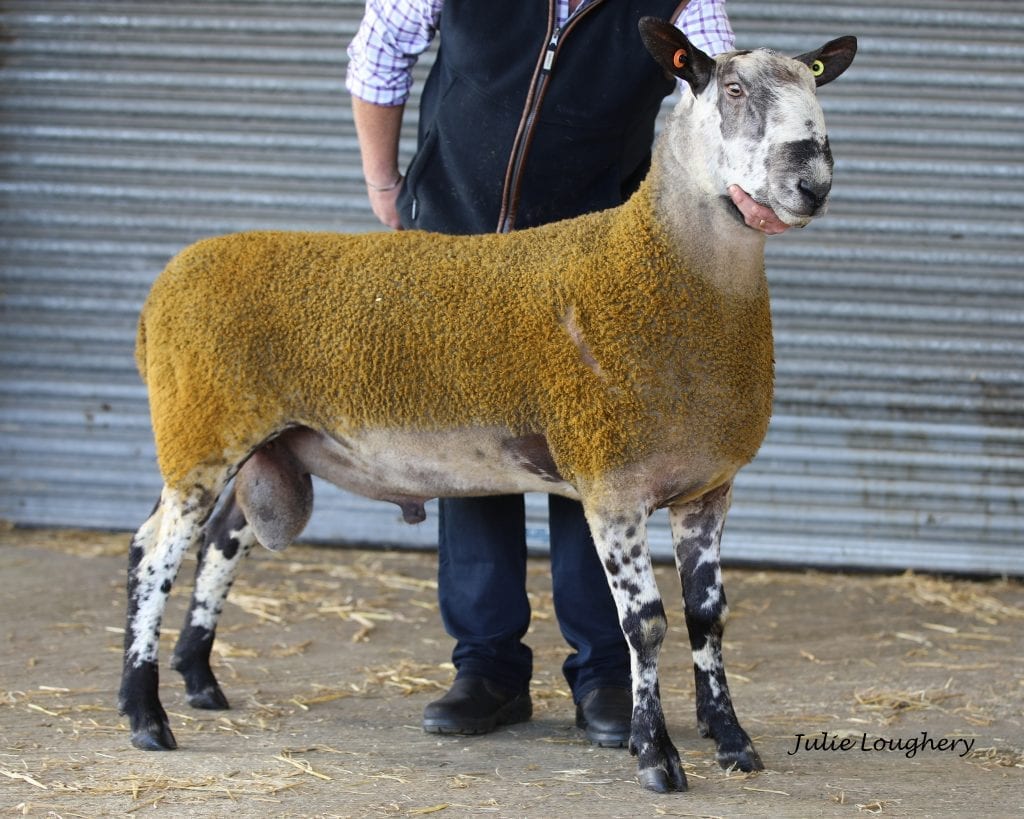 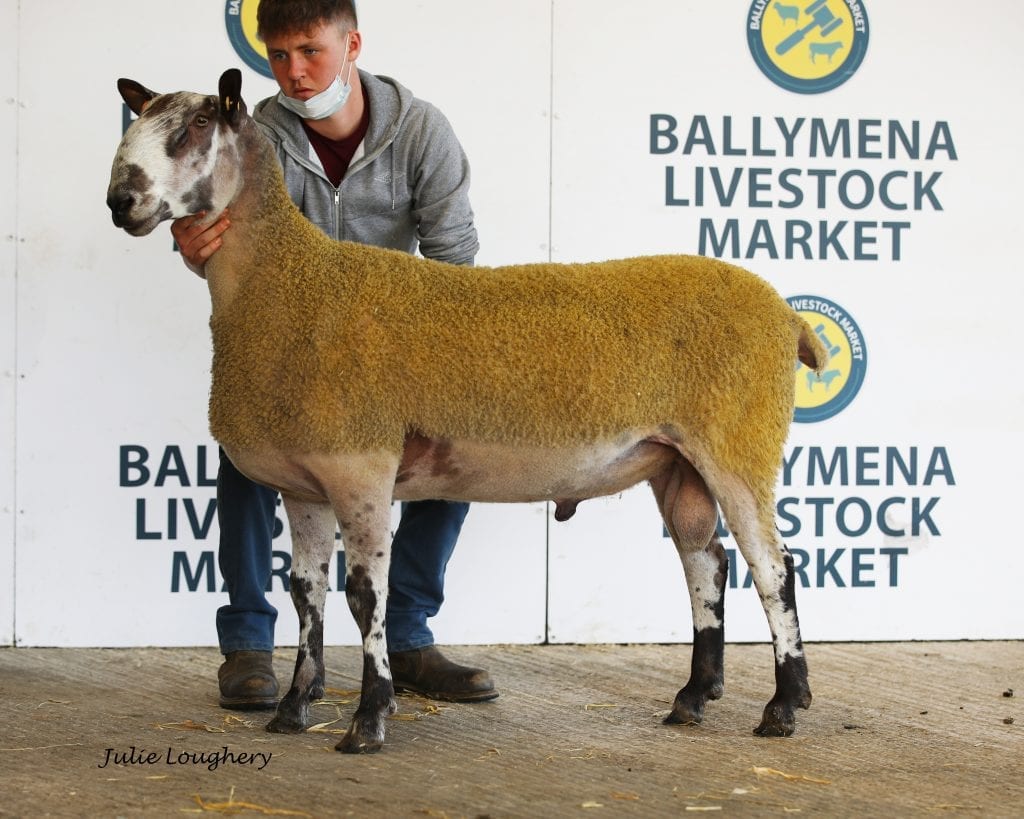