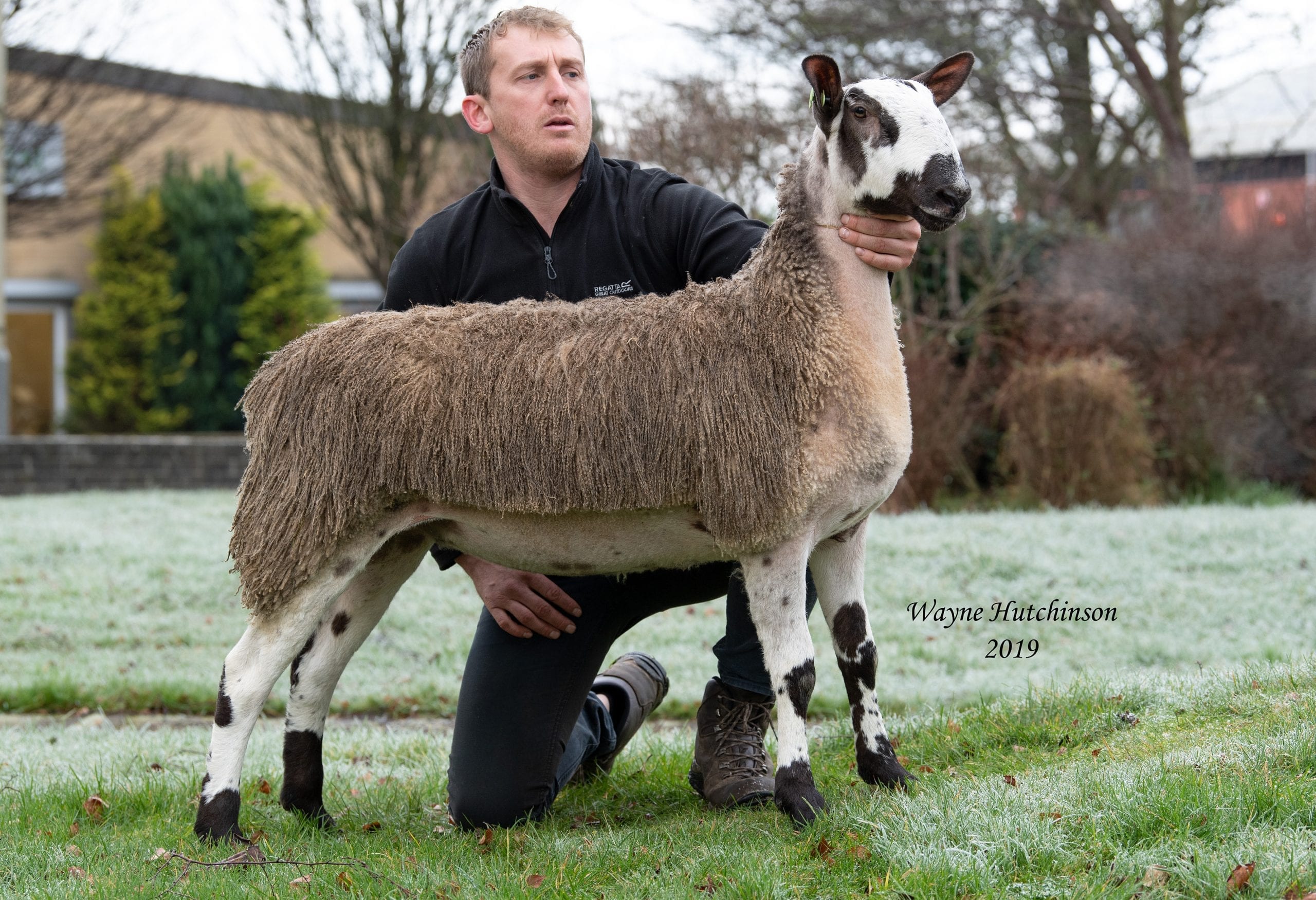 A bonanza of crossing sheep were up for sale at Carlisle, with over 200 in the catalogue, offering some of the best bloodlines within the breed, which drew a bumper crowd from all over the UK and saw a great trade for the best sheep on offer. The tone was set in the presale show ring with a great showing of females in all classes, but especially in the gimmer hogg class, which must have been one of the strongest classes in the breed for quite some time.

Topping the trade was a stylish gimmer hogg from the Asby Hall flock run by brothers Andrew and Mark Brown, near Appleby in Westmorland. This was the first ever female they have sold, and she was full of great crossing bloodlines on both sides of her pedigree. She was much admired throughout the day and expectations rose as she approached the ring. She is by the £24,000 K1 Smearsett bought out of Hawes a couple of years back and out of a homebred ewe by another Smearsett, G1 this time, and full sister to the £11,000 lamb they sold to Carry House and The Steel last year through Kirkby Stephen. Bidding was fast and frantic with the hammer finally landing at 9000 gns selling to Neil Laing, Lanark.

The day’s Champion just fell shy of taking the top price of the day, but it was certainly not a bad weekend at the office for Martin Allen, Greenhow after taking the Championship at the Hawes sale, he followed that up with another red white and blue ticket with his cracking gimmer hogg. She is by the £23,000 K1 Riddings, a son of the Carry House Jackpot and out of a ewe by E1 Otterburn Lodge. She sold to Lee Beacom in an 8500 gns deal. Her full sister, who stood in the final line up of hoggs in the class sold for 2800 gns to Jack Buckle.

The Reserve Champion came from the noted Kirkby Redgate flock, who brought forward a cracking pen of sheep for the day. Their 2nd prize gimmer hogg was by the £14,000 H1 Skeughdale and out of a ewe by D17 Hewgill “Stork”. Its mother has been a good breeder over the years and her progeny is also producing the goods, this fact, combined with such good lines, persuaded Lee Beacom to part with another 8000 gns and then as its full sister strode into the ring, after taking 3rd place in the show, he parted with another 5000 gns to keep them together. In all the Kirkby Redgate pen averaged just shy of £2500 for their 10 hoggs offered for sale.

Neil Marston from the Highberries flock was having a reduction sale which saw him selling a batch of in lamb gimmer shearlings, selling to a top of 2600 gns. She was sold to Gavin White, Ribblesdale flock. He also offered a ewe carrying embryo twin lambs to the legendry Z4 Hundith, the first time such an offering has been made. There can be no doubting the influence this sire has had on the breed and the chance to buy into such strong bloodlines was very appealing. The mother to the lambs was an old Swathburn ewe which had initially been at Greenhow and was the grandmother to the Champion lamb and its sister at 2800gns. The breeding behind these great embryos was enough to see the original breeders club together and fork out 5000 gns for the outfit, with Geoff Taylor, Swathburn and Martin Allen taking the prodigals home.

Another gimmer hogg making its way over the Irish Sea was the 4th prize gimmer hogg from M/s Lord, who sold their lamb by the H45 Hewgill, the sire of 13 Mule gimmers in their top pens at Hawes and Penrith, and an embryo sister to their £9000 number one lamb sold last year. They have retained three full sisters from this great breeding ewe. It sold for 4000 gns to E D Harkin, Co. Tyrone.

Midlock had their usual pen of in lamb gimmers, and again the quality on offer from this top-notch flock was second to none. They took the first prize in the gimmer class with a gimmer by the £34,000 Kirkby Redgate and out of a well-bred ewe. Its mother is full sister to the dam of Midlock Big Ben and its grandmother has bred some of the flock’s best crossers over the years. She was sold carrying two to the £7100 Shafthill. It sold for 3000 gns to M/s Teasdale, Haydon Bridge. The first from the Midlock consignment also hit 3000 gns. This one was by the J6 Hewgill and out of a ewe by C2 Hewgill which has bred well and also done the business in the showring too, taking the championship at Peebles in 2016. It was sold in lamb to the £20,000 L3 Steel bought last year at Hawes, and was sold back to the Steel as the Hunters looked to buy back into the genetics.

With the ring packed throughout, it was good to see the enthusiasm within the breed, with buyers looking for correct sheep, but also increasingly, for sheep with strong crossing bloodlines in, making sure the heritage type of sheep which made the breed what it is, is not forgotten. 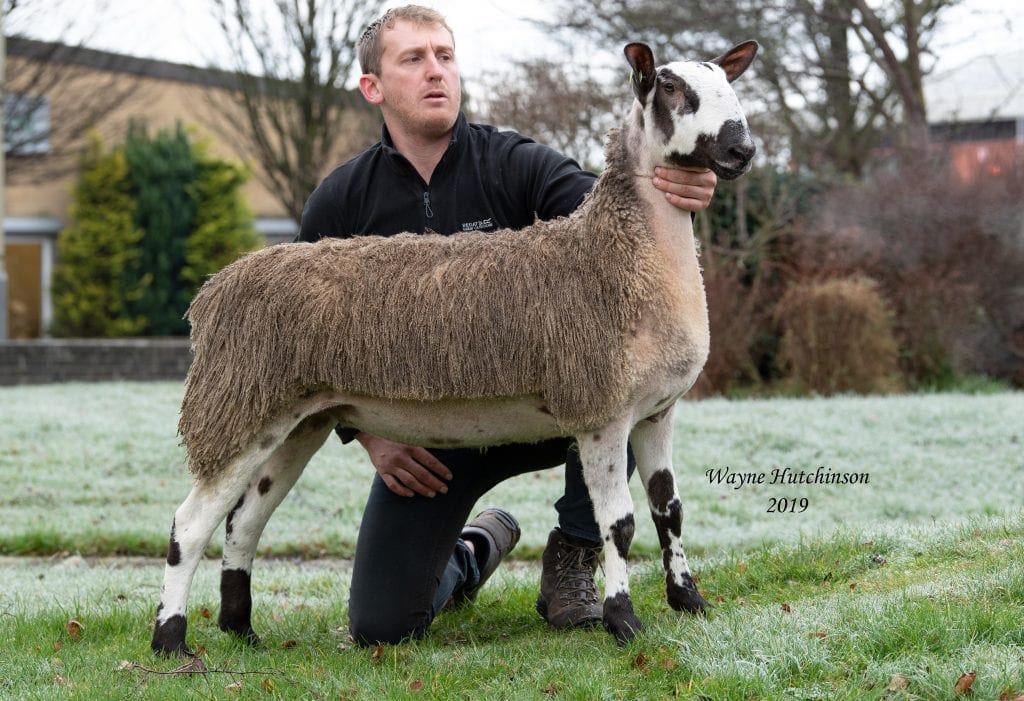 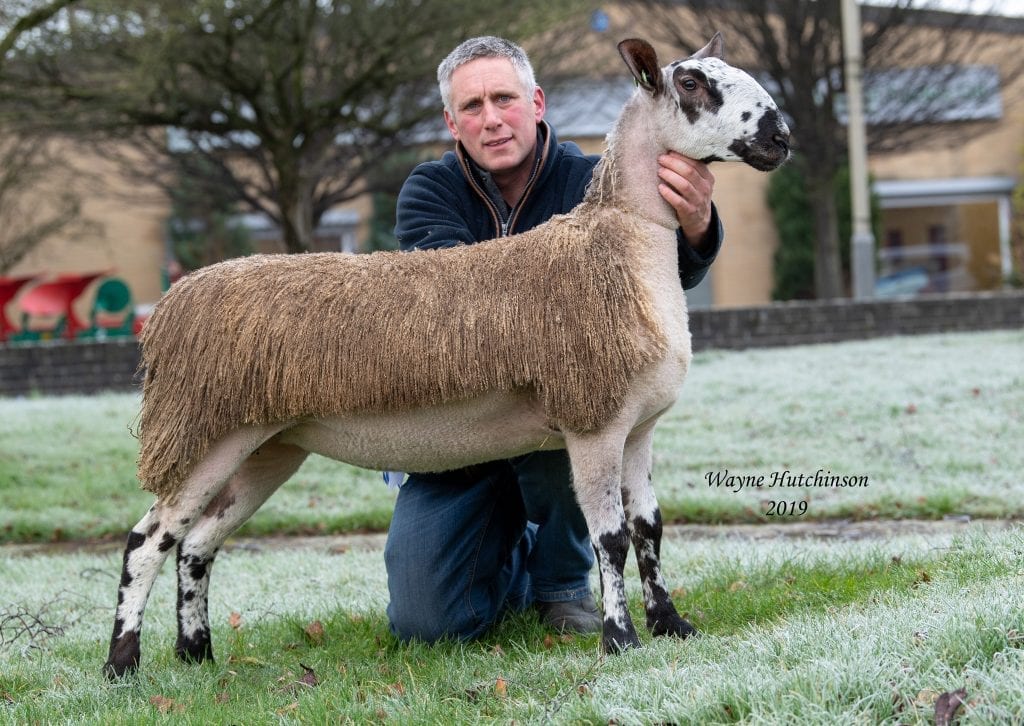 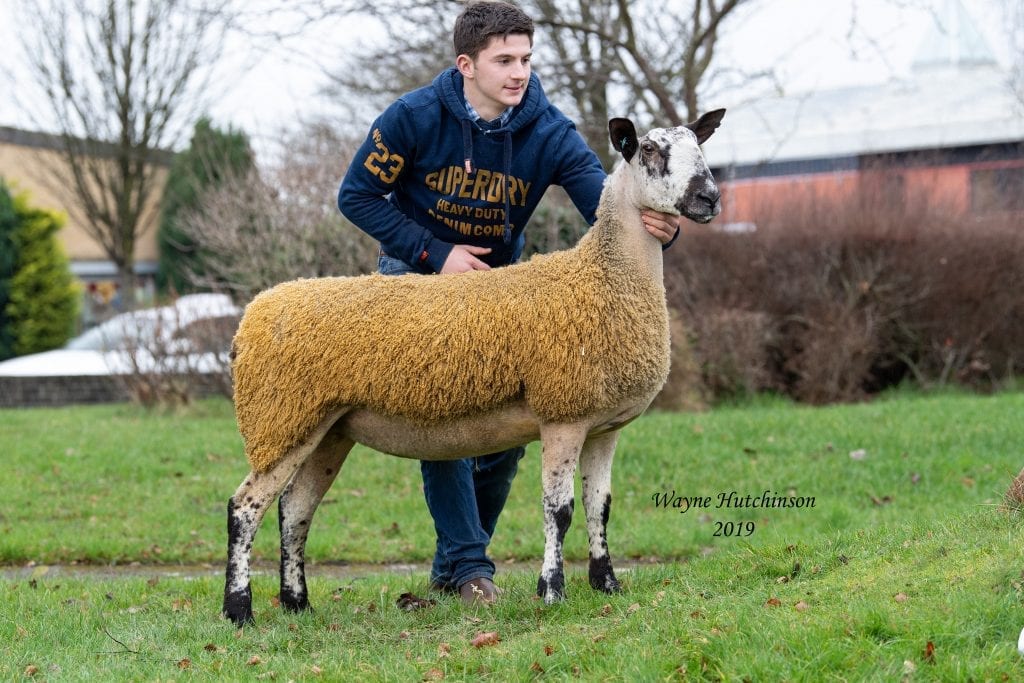 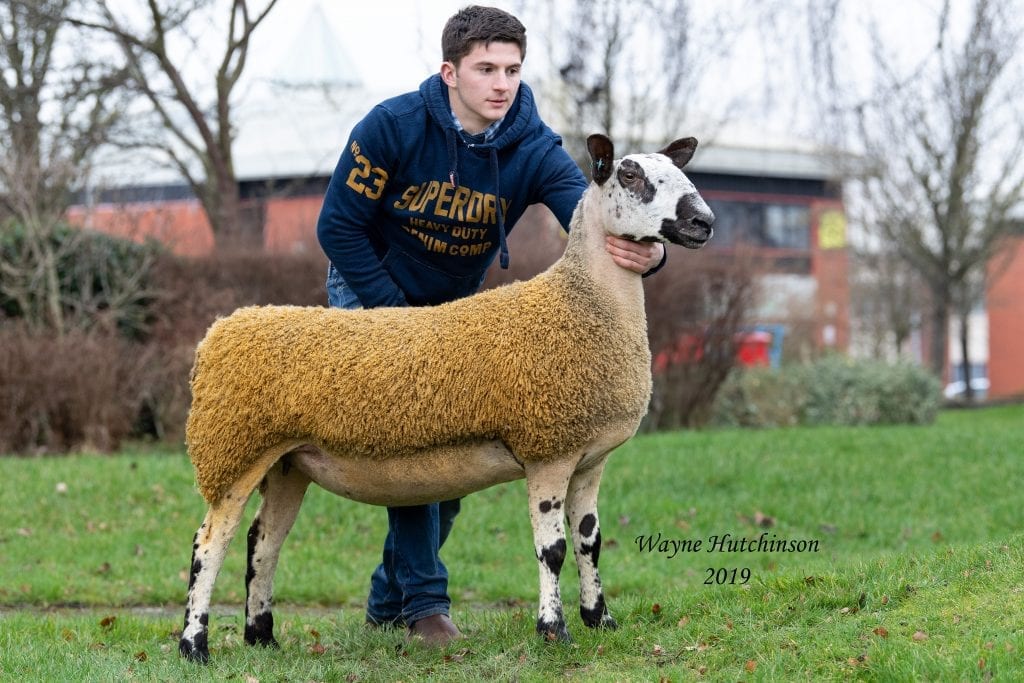 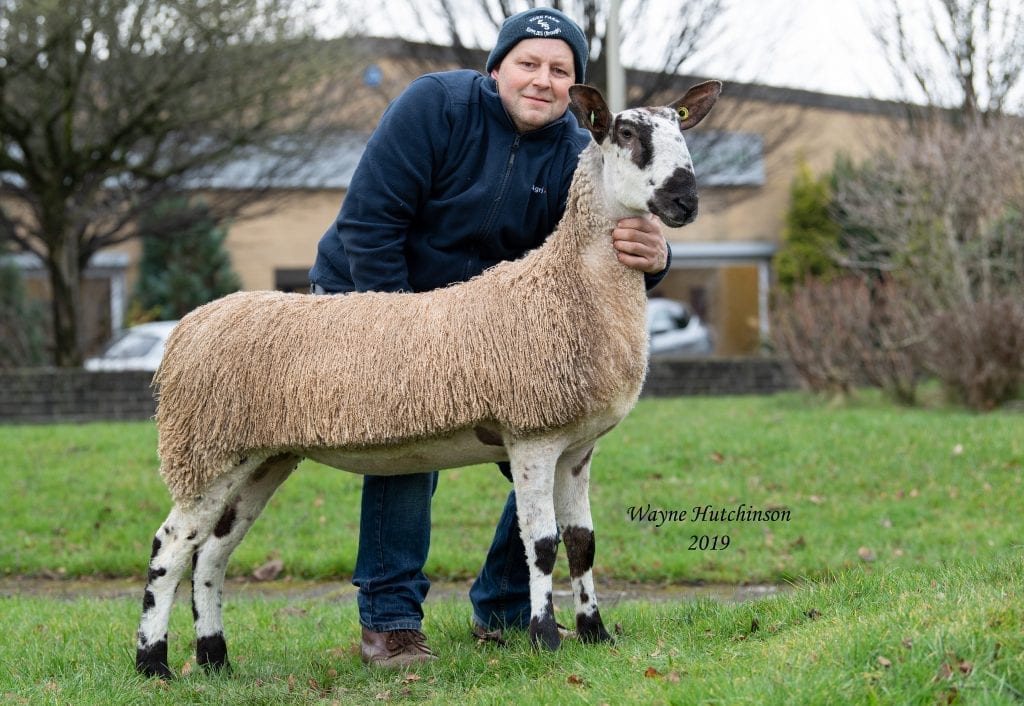 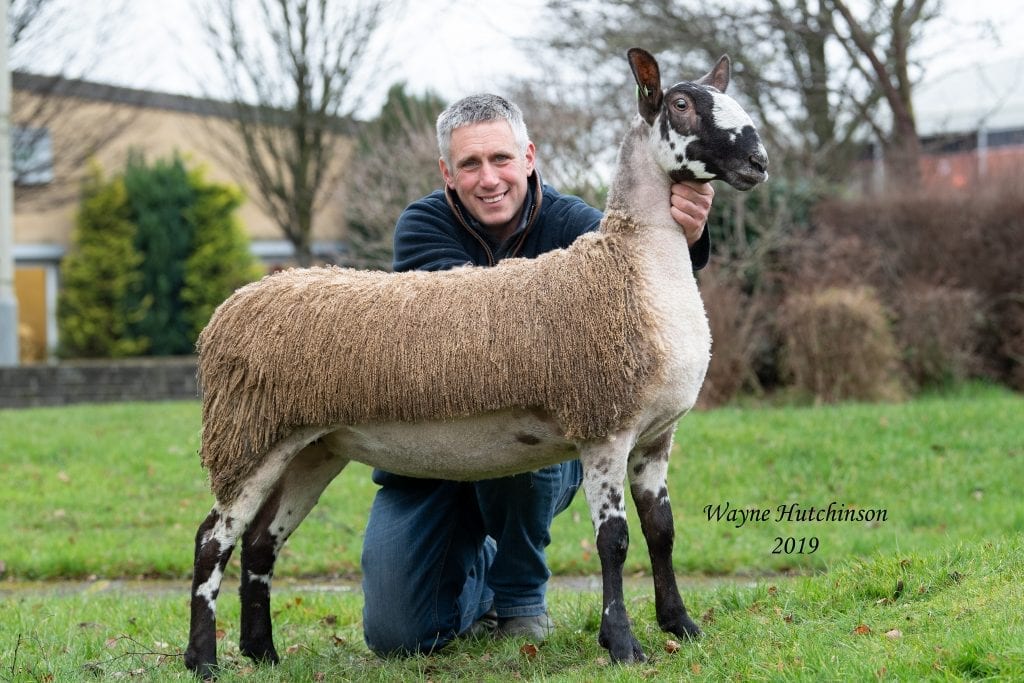 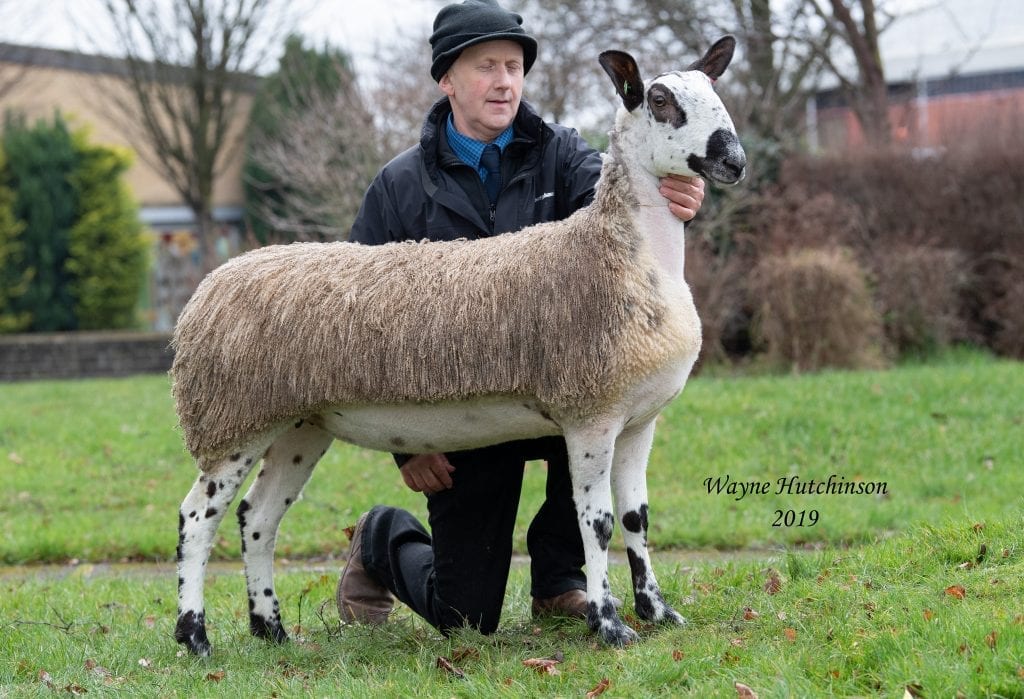 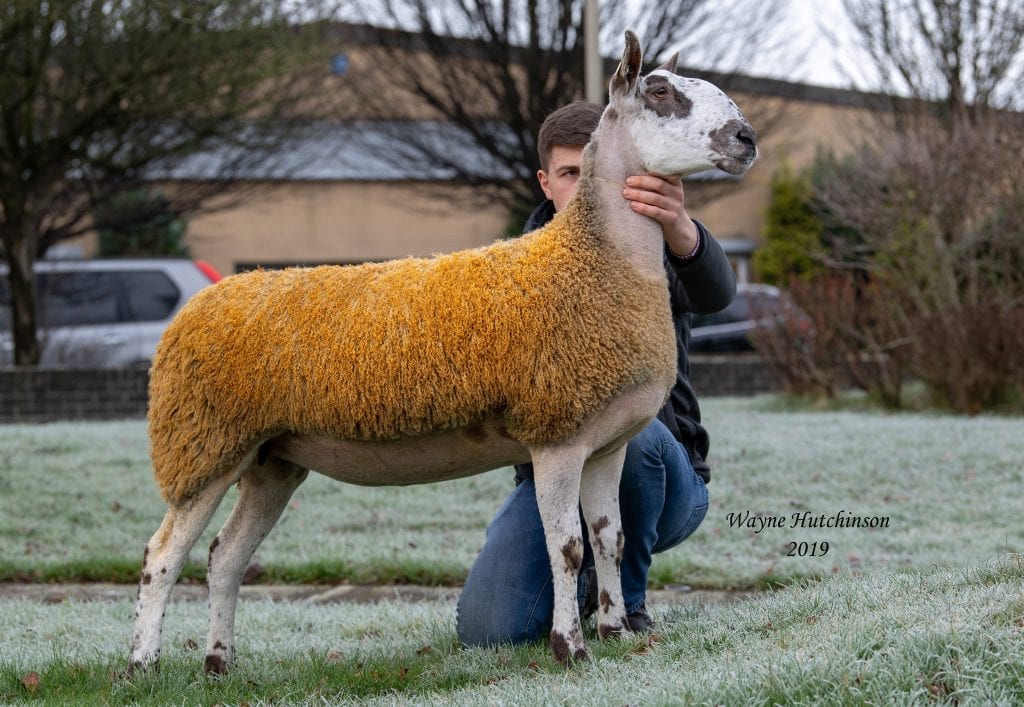 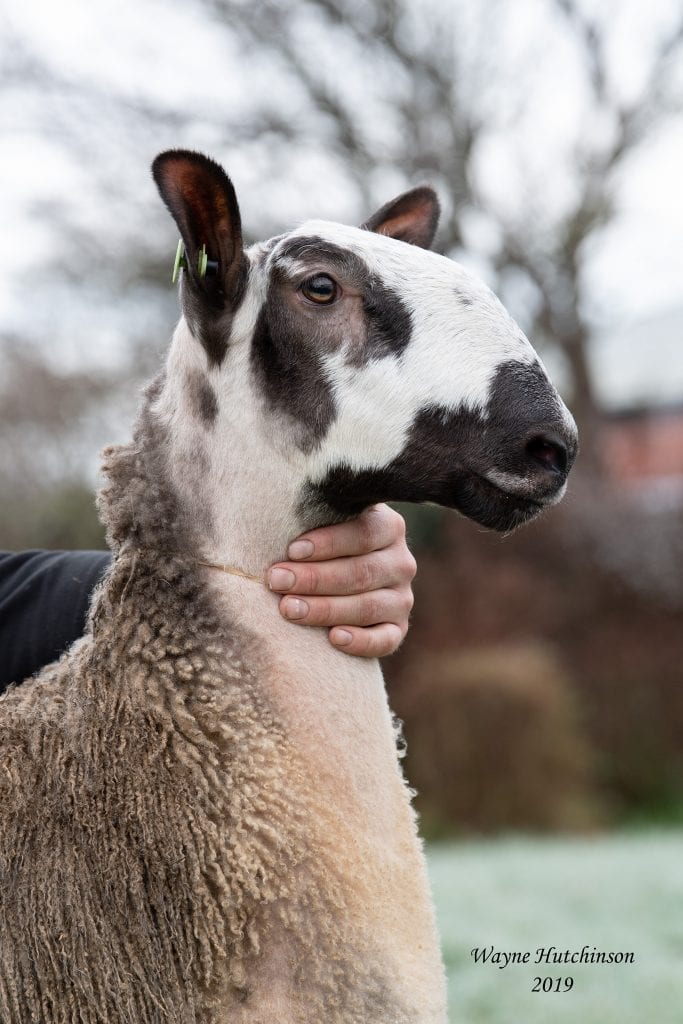 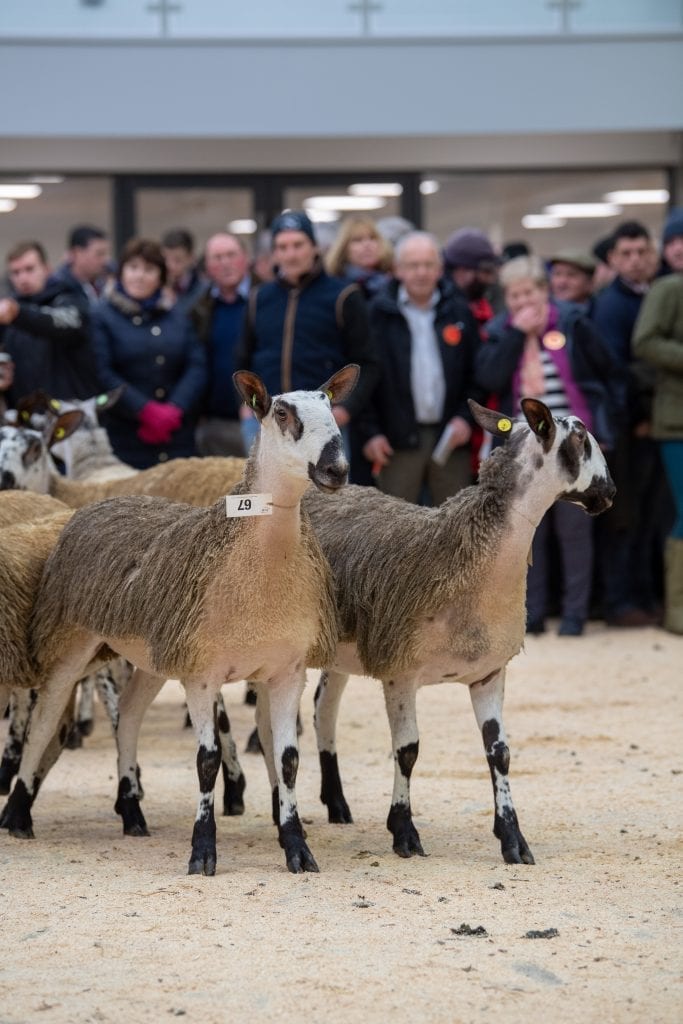 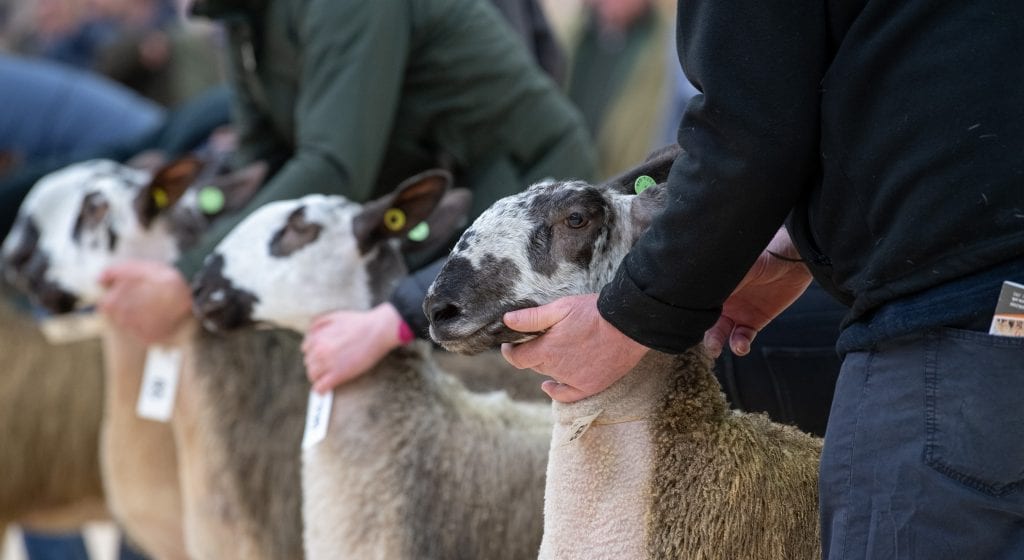 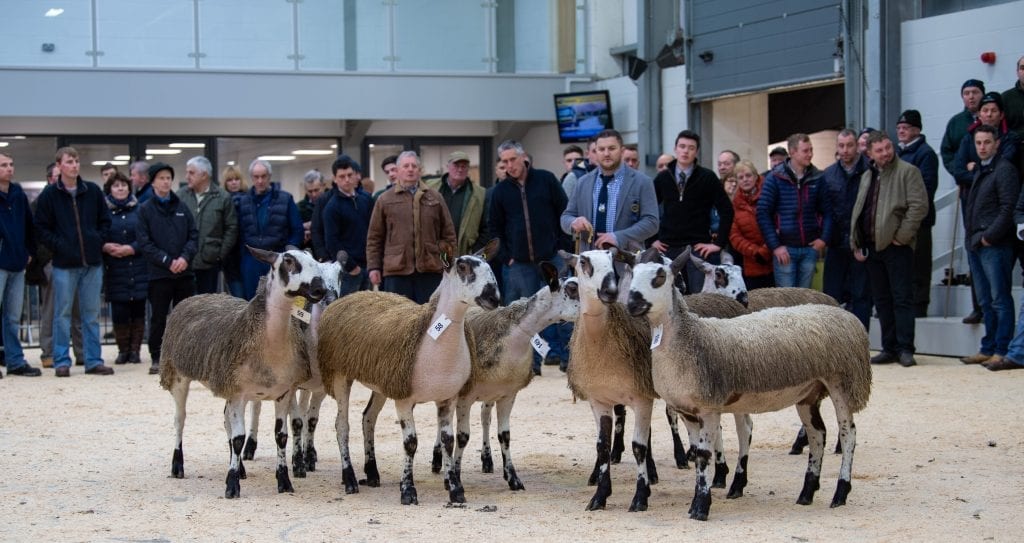 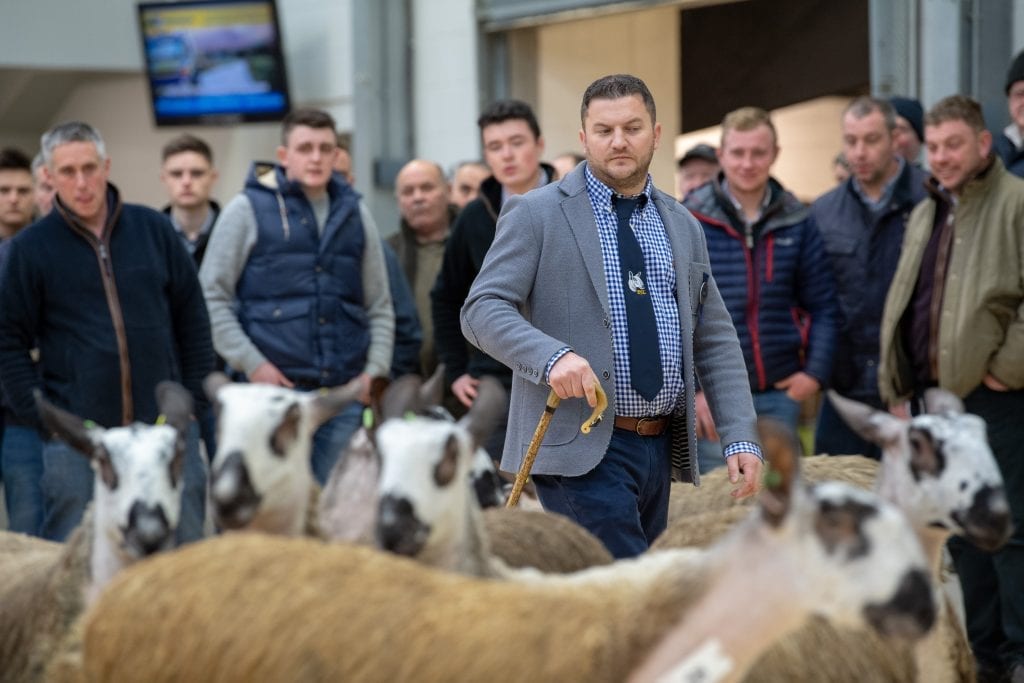 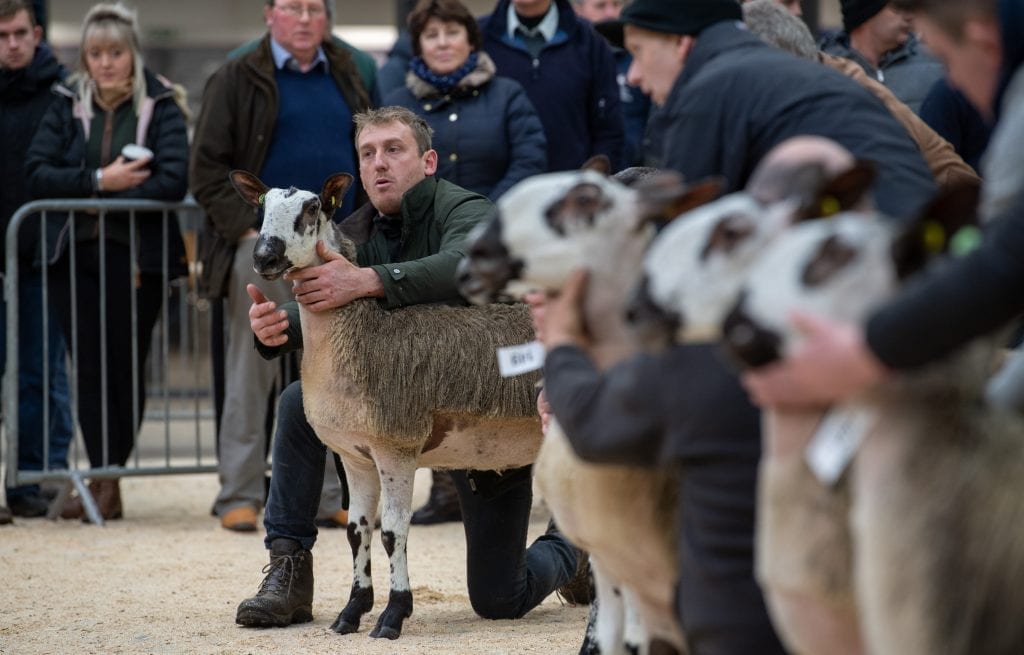 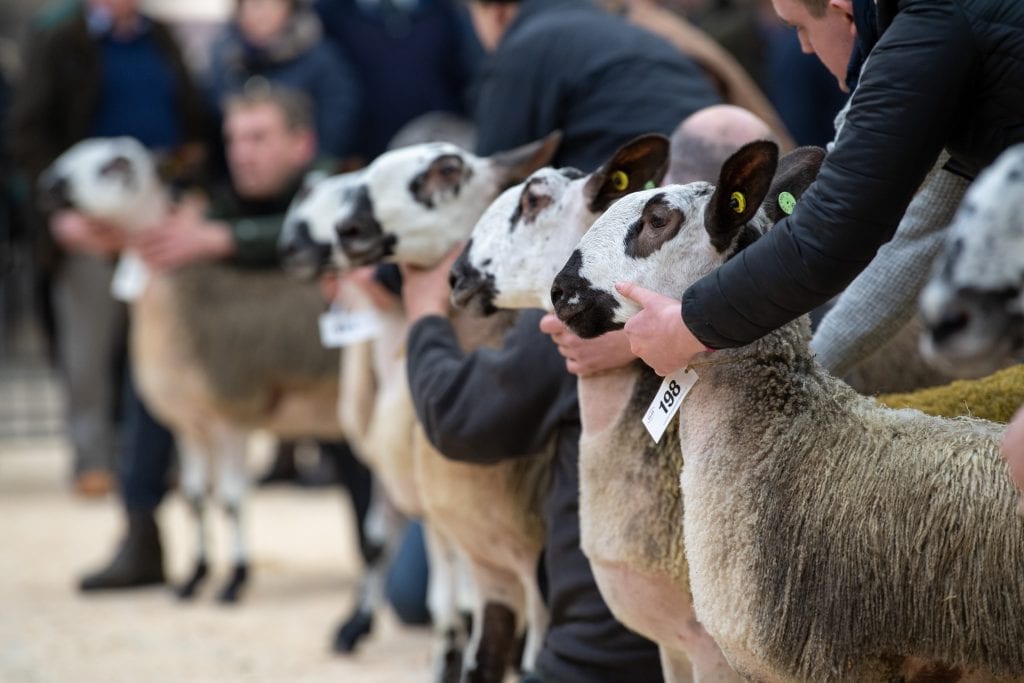 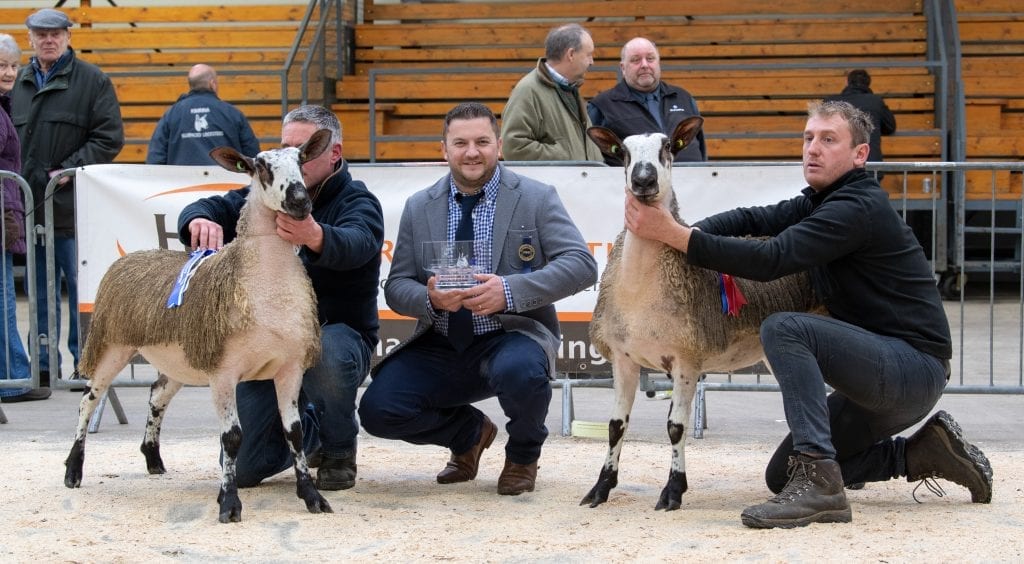