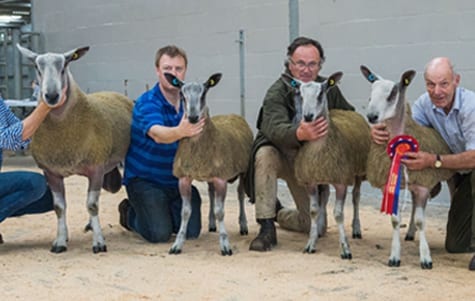 Again this year the members of the Welsh Region turned out a tremendous display of livestock for our judges to officiate over. For the Bluefaced Leicester classes, the judge was the well travelled Matthew Seed who came down from his home in Cuminestown, near Turriff in the Highlands of Scotland, and for the Mule section the judge was local Mule breeder Geraint Powell from Kerry at Newtown.

Bluefaced Leicester Section
In the individual classes Matthew awarded his Overall Champion to his female Champion, a sharp homebred shearling ewe 1070/J067 Cernyw ‘Jini’ from the performance recorded Cernyw flock of Elfyn Owen. She has an index of 202, and her sire is 1257/G5 Cassington ‘Wildthing’ and she is out a homebred ewe sired by 1070/C10 Cernyw.

The Reserve Overall Champion also came from the Cernyw Flock with the reserve female Champion taking the honours which was the first prize aged ewe. She is another homebred ewe 1070/G057 Cernyw ‘Gloria’, sired by 4264/D003 Howlea, and out of a homebred ewe sired by 1070/Y001 Cernyw. This year she had twins by the homebred 1070/G001 Cernyw ‘Gladiator’, and one of her ram lambs took the first prize in the performance recorded ram lamb class and he will be heading for the NSA Wales & Border Ram Sales at Builth Wells in September.

The Male Champion was awarded to a homebred shearling ram from T R Harris, Bonvilston. This eye catching ram 2906/J16 is sired by 3114/D2 Shrewbridge out of a ewe sired by the Broomhills 7/B4. He stood third in his class at the Royal Welsh Show 2017, and was Reserve Interbreed at the Vale of Glamorgan show this year.

The Reserve Male Champion also came from the Bonvilston flock of T R Harris, with a homebred ram lamb 2906/K9 sired by 3935/G7 Piel View, and out of a homebred ewe sired by 3114/D2 Shrewbridge.

Tudor Harris also won first prize in the aged ram class with 2963/H1 bred by R G & R A Jones & Son, Robleston. He is sired by 1070/G16 Cernyw, and out of a ewe sired by 2906/C1 Bonvilston which was sold for 4000 gns as a four year old at the NSA Wales & Border Ram Sales at Builth Wells in 2013. This Robelston ram has been shown successfully in the past winning first prize when shown as a ram lamb in 2015 at the Royal Welsh Show. He returned to the Royal Welsh Show a year later to scoop the first prize in the shearling ram class, and this year stood second in the aged ram class at the Royal Welsh Show. He also sired the Overall Breed Champion in the traditional section at the Royal Highland Show in 2016. All three of the Bonvilston first prize winners will be offered for sale at the NSA Wales & Border Ram Sales in September.

In the progeny classes, Matthew awarded his Champion group to T R Harris, Bonvilston with his group of three ram lambs shown with their sire – all the lambs are sired by the first prize aged ram 2963/H1 Robleston and are out of 65/D1 Burndale sired ewes. The Reserve Champion progeny group was awarded to the three shearling ewes by the same sire from Elfyn Owen, Cernyw. The homebred shearling ewes 1070/J50, J45 and J47 are sired by 1070/G1 Cernyw ‘Gladiator’.

Mule Section
With a small but select show of Mules forward, our Judge Geraint Powell found his breed Champion in the first prize shearling ewe from the flock of Will Jones, Gwenthriw. This is the second year in a row that Will has taken the Mule championship at this show. The Reserve Champion was awarded to the first prize Mule ewe lamb (coloured type) from Myrfyn & Jayne Roberts, Myfyrian.

In the progeny section, the champion group was awarded to John Armstrong Lay’s flock from Herefordshire with his group of three Mule ewe lambs (any other type) shown with their sire 907/G3 Tywyn.

In the young handlers section, the Overall Champion was awarded to Miss Lexi Lane, from Kerry, near Newtown.

Progeny Show - Three Ram Lambs With Or Without Sire

Progeny Show - Three Ewe Lambs With Or Without Sire 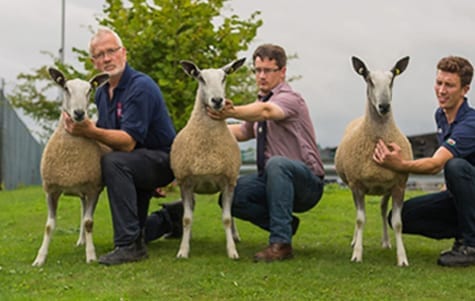 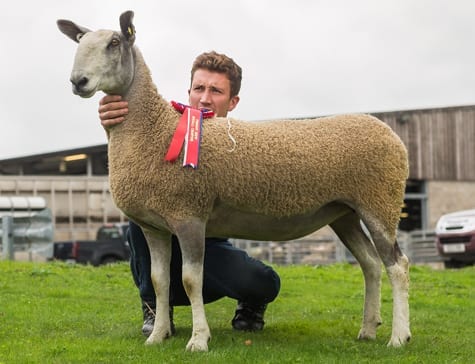 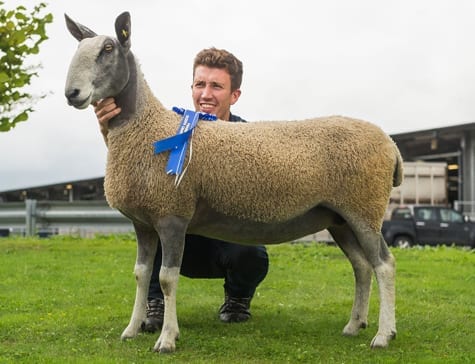 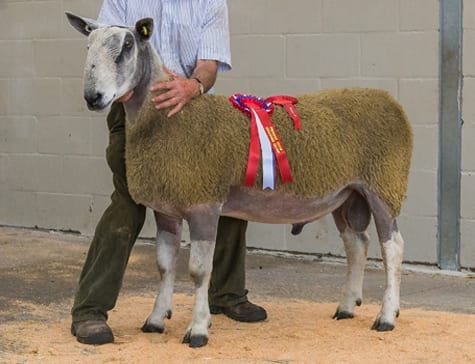 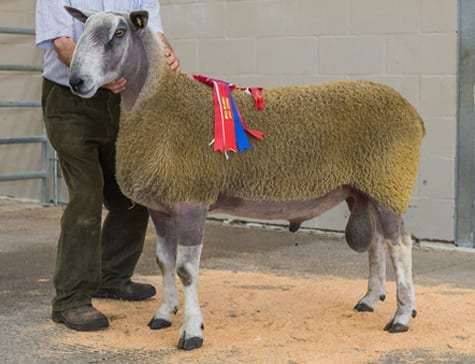 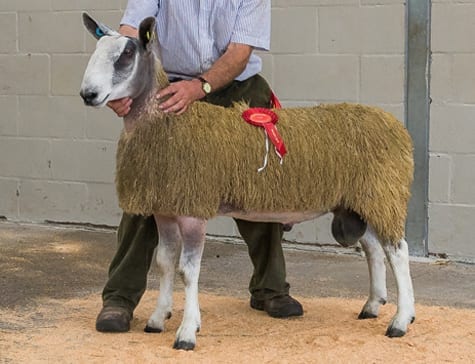 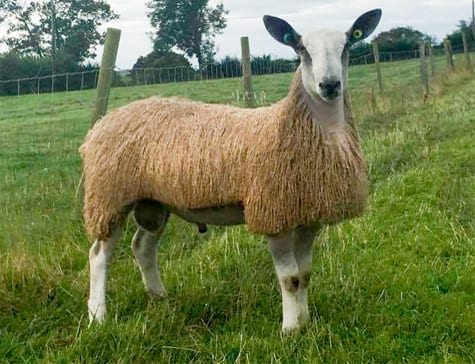 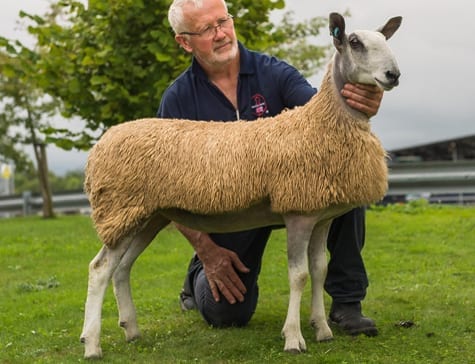 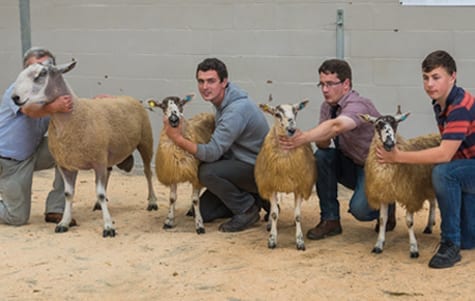 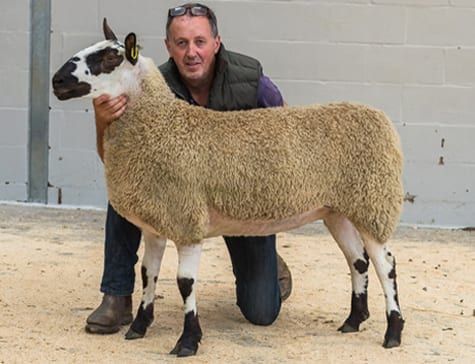 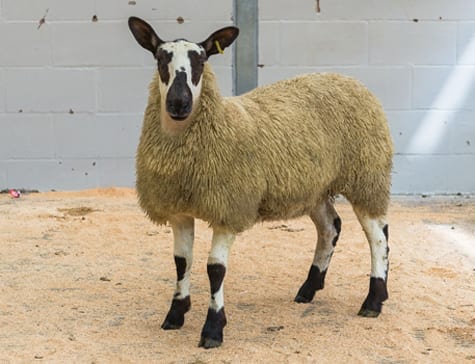 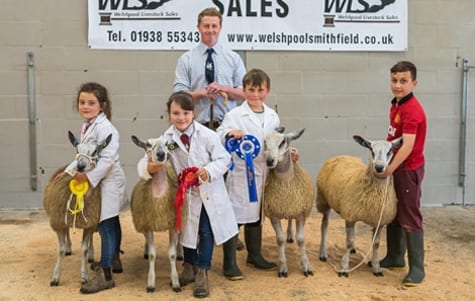 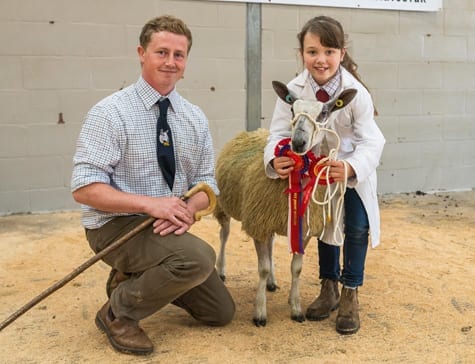