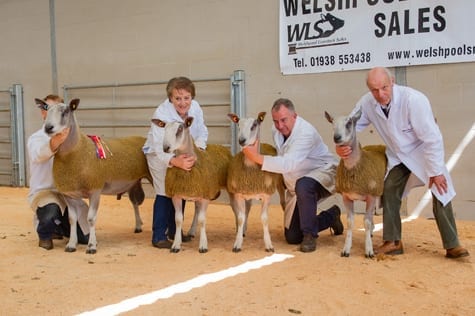 This year’s judge travelled an exhausting round trip road journey of 830 miles was John Mclachlan from the Kildalloig flock based in Campbeltown, Ayrshire.

Bluefaced Leicester Section
In the individual classes John awarded his overall champion to his female champion which was a tremendous homebred aged ewe 1183/H022 brought out by Myrfyn and Gareth Roberts, Myfyrian. She is sired by 2814/G002 Street out of a homebred ewe 1183/F014. She is also half sister to the Reserve Male Champion. She has bred really well within the Myfyrian flock including one of the three ewe lambs in the reserve progeny group. This is her second win in the show ring in as many days also taking the Overall Interbreed title at the recent Anglesey Show. She is to be retained by the Roberts Family.

The Roberts Family also took home some new silverware this year awarded at the progeny show. For the first time is the Lower Down Trophy presented by Association President Mrs Jackie Williams. This is a new trophy awarded to the Overall Individual Breed Winner. The Roberts family, Myfyrian again took the red rosette in the ewe lamb class with a classy homebred ewe lamb sired by 4237/J005 Low Espley.

Taking the reserve overall champion and reserve female rosette was the second placed aged ewe exhibited by Phil May, Derwenlas. She is a homebred ewe 3822/J045 sired by 110/H008 Woodcroft and out of a homebred ewe. She will be for sale at the Association Sale at Welshpool this year on the 26th September.

Sophie and Raymond Harding, Shrewbridge took the honours in the shearling ewe class out of 17 entries forward with a homebred ewe 3114/L015 she is sired by the 4024/H001 Espley.

The Male Champion came from Miss Jacqui McLeod of the Wanstead Flock. He is a sharp homebred lamb 3649/M001 sired by 2963/L001 Robleston Hall, who was reserve male champion at the 2018 Royal Welsh Show. Wanstead 3649/M001 will be for sale later in the year at the Association Sale in Carlisle on the 11th October.

The Reserve Male Champion was awarded to the first prize aged ram from T R Harris, Bonvilston with the eye catching 1183/K008 Myfyrian who is half brother to the overall champion. He was bought out of Carlisle by the Harris family as a lamb in 2017 for £5,200. He is sired by 2814/G002 Street. He sired the three ram lambs which were awarded the overall champion group in the progeny section. The ram is to be retained by the Harris family for their stock tup and the three ram lambs from the prize winning group will all be brought out for sale at the NSA Wales & Border Ram Sale at Builth Wells on the 23rd September.

Taking the red ticket in the Shearling Ram class was Phil May, Derwenlas. This time with a bought in ram 233/L043 from the Parton Flock. Phil bought him as a lamb out of the Carlisle sale last year. He has been shown at the Royal Welsh Show this year where he came second in his class. He will be retained by Phil as his stock tup.

In the Recorded Ram Lamb class it was the Roberts family, Myfyrian who were the victors this time with a homebred lamb sired by Low Espley 4237/J005 and he will be for sale at the NSA Wales & Border Ram Sale at Builth Wells on the 23rd September.

The reserve champion progeny group was awarded to the 3 ewe lambs by the same sire from Myrfyn and Gareth Roberts, Myfyrian they were sired by 4237/J005 Low Espley and will all be retained in the flock.

He found his breed champion in the first prize gimmer from the Myfyrian flock of Myrfyn & Gareth Roberts, sired by Carry House Trooper 281/H012.

In the progeny section the champion group was awarded to Elfyn Owen’s group of three mule ewe lambs (whitefaced type) shown with their homebred sire. 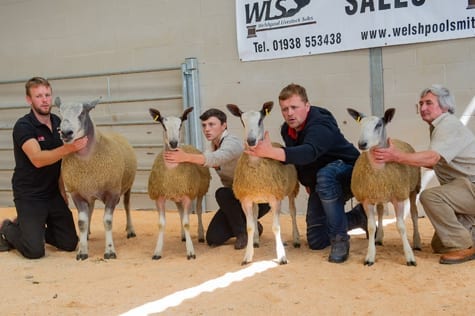 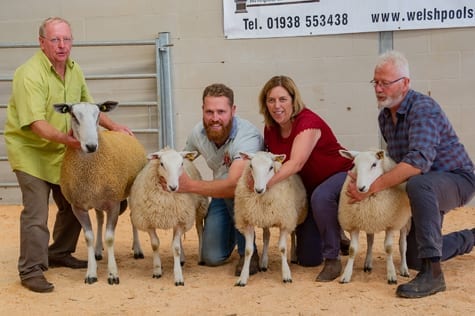 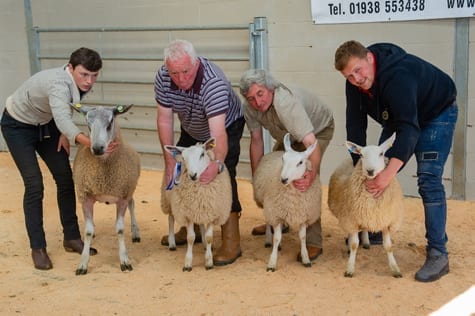 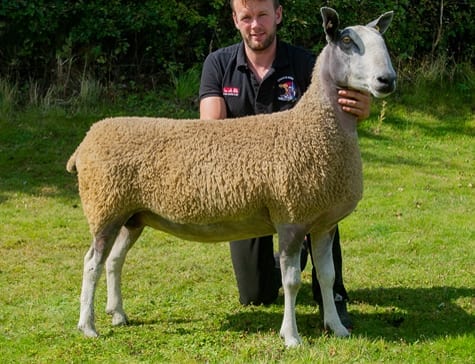 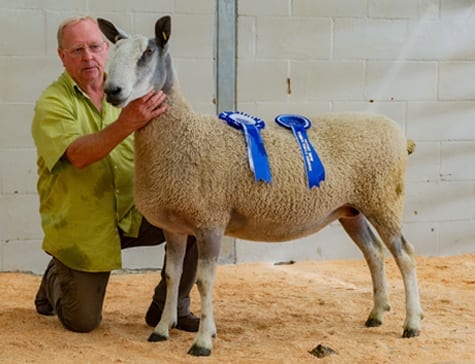 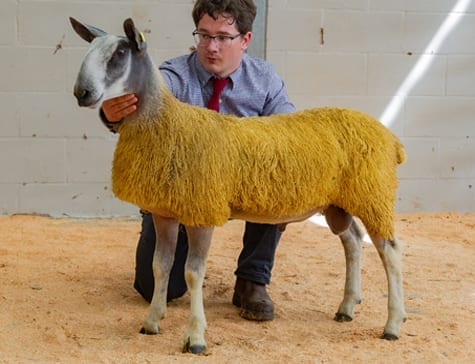 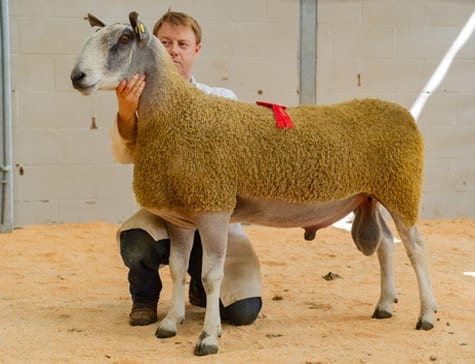 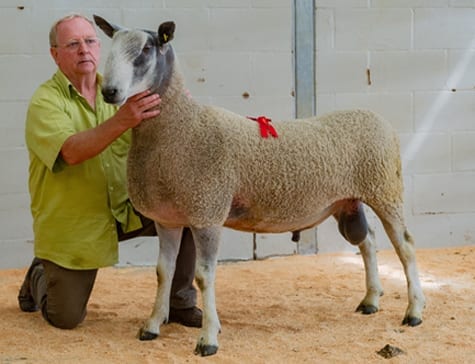 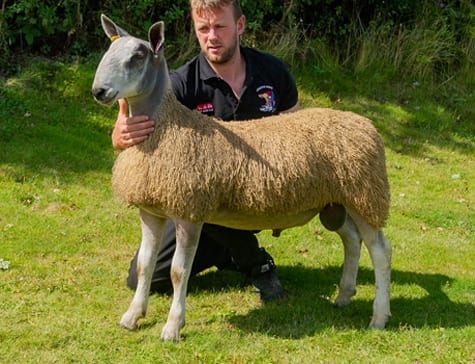 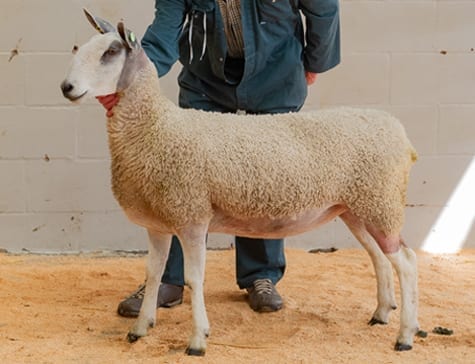 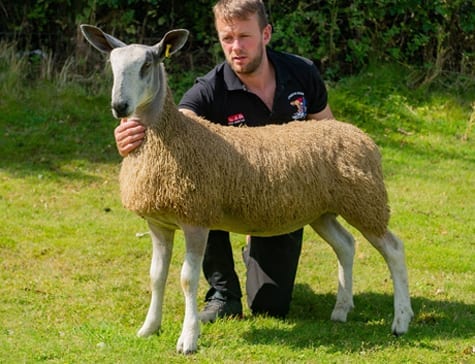 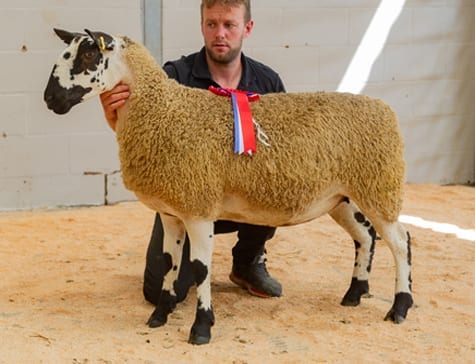 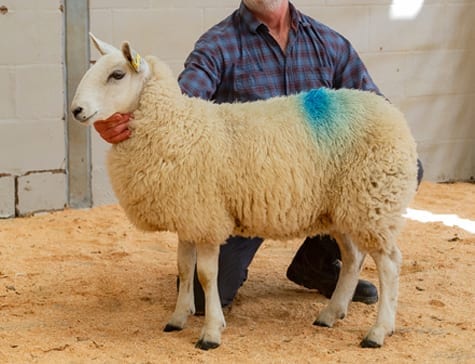